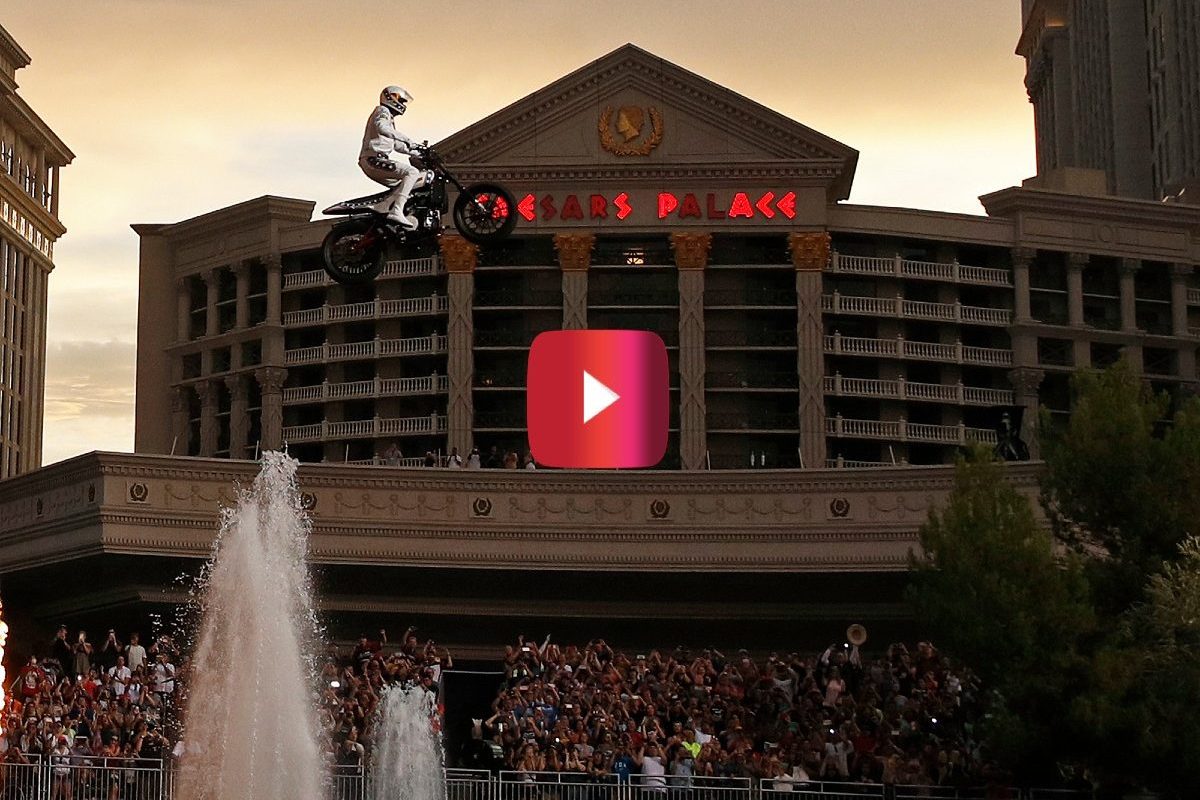 You don’t have to even know much about Evel Knievel to know that his name is synonymous with larger-than-life stunts.

When he began his career in the ’60s, little did Evel probably know just how many people he would go on to inspire in the decades that passed to pursue a career in the dangerous field.

Travis Pastrana, a renowned stunt performer and motorsports competitor in his own right, is one of the countless people that Evel inspired with his famous jumps. In a special event from Las Vegas that aired on the History Channel July 8, 2018 called Evel Live, the X Games star paid tribute to the late daredevil by successfully recreating three Evel Knievel stunts in an Indian Scout FTR750.

The first trick that Pastrana landed was a recreation of the 50-stacked-car jump that Evel completed at the Los Angeles Memorial Coliseum in February of 1973.

The American action sports icon upped the ante just a bit by adding in two more crushed cars to the stunt, and as you can tell by the footage, he pulled it off without a hitch.

“I think the hardest part was getting the whole costume on,” Pastrana later joked after landing the stunt.

In many respects, Evel Knievel’s failures were just as iconic as his successes, because they demonstrated his willingness to get back on his bike and continue to perform for his adoring fans despite gettin banged up in stunts that would’ve ended most stuntmen’s careers.

One failure that particularly comes to mind was at London’s Wembley Stadium in 1975 when Evel tried (and just barely failed) to jump over 13 buses.

For his second stunt, Pastrana went on to clear 16 Greyhound buses with his Indian motorcycle, and, after completing the amazing feat, Pastrana simply said, “Man, this is just an awesome honor.”

Before, during, and after each stunt, Pastrana seemed to be completely in his element. It was clear he was having the time of his life, and he reiterated as much throughout the historic event.

?It?s just such an honor to live a day in Evel?s footsteps, and literally his boots,? Pastrana said, according to The Guardian. ?To be here in Las Vegas, so much of my history has been here. I proposed to my wife here, I had [the] first Nitro Circus show here. This was definitely the coolest thing I?ve ever done.?

?This is all about Evel, and the coolest thing about this whole thing, all of Evel?s family is out here,? Pastrana said. ?This is the home of the most iconic jump, one of the most iconic events that has ever gone down. And to end at Caesars Palace, to have a chance to jump the fountain. It?s not the longest jump but it?s definitely the hardest.?

As Pastrana himself said, the Caesar’s Palace fountain jump is certainly no joke. Evel, ever the showman, attempted the stunt back on New Year’s Eve 1967, and definitely ended up paying for it when he crushed his pelvis and fractured several other bones after flipping headfirst over the handlebars.

To avoid a similar fate, Pastrana approached the fountain from the opposite direction, with the area being “much more built out,” as The Guardian explained. The end result was nothing short of spectacular.

Knowing the history behind each stunt, it’s impossible not to get chills watching Pastrana do his thing in front of that many people. That being said, which stunt was your favorite?