Feeling Lucky? You Can Now Place Your NASCAR Bets at This Race Track 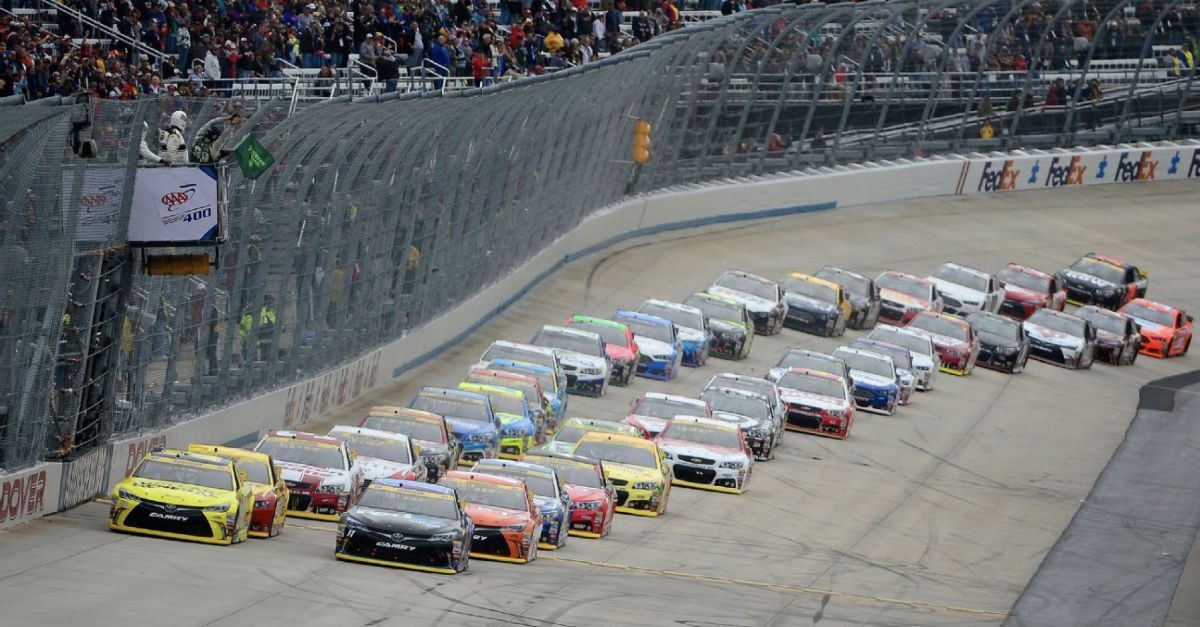 DOVER, Del. (AP) ? Place your bets at Dover and let it ride: The track is ready to roll the dice on NASCAR betting.

NASCAR fans could skip blackjack tables and roulette wheels inside Dover Downs Hotel and Casino if they want to bet on their lucky numbers this weekend at Dover International Speedway.

Delaware becomes first state into betting parlors outside a sports book, as legal wagering debuts for #nascar at @MonsterMilehttps://t.co/OD5QHimtkg@Gambling

Want to stay on 18? Good choice, Kyle Busch is a 3-1 favorite to win at the Monster Mile.

And if you’re feeling lucky, how about three-time Dover winner Matt Kenseth at 300-1?

Sports betting has come to Delaware and the track is set to throw open the betting windows and allow wagers on most of this weekend’s track activity. The NASCAR Cup race on Sunday is the main attraction, and fans can bet on the race winner, the first two stage winners, and a slew of prop bets that range from number of drivers to lead a lap to the average race speed.

“It just adds an element of interest to keep people tuned in to what’s going on,” Dover Motorsports CEO Denis McGlynn said.

Because of a failed sports lottery experiment in 1976, Delaware was partially exempted from the 1992 federal ban on sports gambling that was recently struck down by the Supreme Court. That exemption led to broader sports betting legislation passed in 2009 and Delaware enacted an NFL parlay wagering system, which combined to give the state a head start in offering full-scale sports wagering.

“They can do it all here,” McGlynn said.

Ryan Blaney, who won last week’s race at Charlotte Motor Speedway, said he wouldn’t tell his friends to bet on him to win Sunday’s playoff race. At 20-1 to win at Dover, that’s probably good advice.

“If I lose them money, I’m going to feel bad,” he said. “I’ll be watching the window that weekend. I’ll have to ask if people are constantly betting throughout the race. If you have people who really like to gamble and want to get into a new form of it, maybe they’ll come out and give it a shot. I don’t think it’s a bad thing. It’s a cool little deal that they’re allowing in that state.”

Outside the casino, bets can be placed Saturday and Sunday at a station set up not far from the track’s signature Monster Monument.

“I won’t be making a visit to that just because I don’t gamble,” Blaney said.

Blaney says he won’t bet on himself but there are no rules prohibiting drivers or anyone affiliated with the series from betting on the race. Dover is counting on fans to drop a few bucks on the race, though the sport has not yet ignited bettors’ passions.

The Delaware News Journal reported this week that NASCAR wagering has raked in just $60,000 since June 5; less than 0.2 percent of the total $39.77 million wagered on all sports so far in the state.

“We don’t anticipate a huge movement from a revenue standpoint for the gaming company,” McGlynn said. “What we’re hoping for is, just the ability to broaden the field of wagering on sports to include NASCAR will somehow increase the interest in it.”

McGlynn said sports betting won’t save NASCAR but it could be part of the cure for a sport impacted by sagging ratings, dwindling attendance and longtime sponsors pulling out of the series.

“It doesn’t replace having a Tiger Woods for the sport,” McGlynn said.

NASCAR driver Brendan Gaughan raised eyebrows in NASCAR when he placed a bet on himself in Las Vegas to win the 2004 Daytona 500. Gaughan didn’t get in any trouble, but the potential for thorny situations could arise without a gambling policy. Signs are posted in baseball clubhouses and most sports locker rooms warning of the severe consequences of betting on sports. NASCAR teams could make their own gambling policies, especially as more states plan to legalize sports betting. Pennsylvania, one of the nation’s most aggressive gambling states, which appears weeks away from becoming the sixth state with sports betting.

#BrendanGaughan during opening ceremonies before the NXS race at @roadamerica #NASCAR

“I’m not sure I’m ready to bet on a NASCAR race,” team owner Roger Penske said.

McGlynn said NASCAR has been “pretty quiet. I don’t necessarily know how to read that.”

“There’s been no guidelines related to auto racing,” McGlynn said. “Right now, there are no rules that I’m aware of about what competitors can and can’t do. I think it would be smart for the competitors not to engage in it. But I’ve not had any dialogue with NASCAR along those lines.”

NASCAR declined comment this week and referred to a statement from earlier this year that said it will, “continue to monitor what the (Supreme Court) ruling will mean for individual states and our sport.”

NASCAR at some point will likely partner with a task force to monitor integrity within the sport and perhaps write guidelines for the rulebook.

McGlynn said he’s not sure he’ll bet, but if he does, he’s going with 2012 Dover winner Brad Keselowski.

“If you win, remember where you got that tip,” he said.