Austin Dillon took out the race leader and made Dale Sr. proud at Daytona 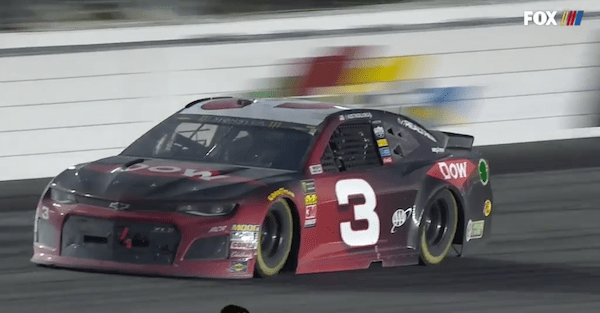 Twenty years after Dale Earnhardt guided the No. 3 to Victory Lane for the first time at the Daytona 500, Austin Dillon took advantage of a great restart in overtime to earn his first career Daytona 500 victory.

Dillon’s win in the No. 3 car comes 17 years after Dale Earnhardt’s tragic death at Daytona, and the moment was not lost on Dillon after he won the race as he paid tribute to The Intimidator.

"This one's for Dale Earnhardt Sr." @austindillon3 I #DAYTONA500 pic.twitter.com/ZeBMqUVVus

“It is so awesome to take the 3 car back to Victory Lane,” Dillon said. “This one is for Dale Earnhardt Sr. and all those Senior fans.”

THE ACE! Austin Dillon is your 2018 #DAYTONA500 Champion. pic.twitter.com/k0D7yi9cRm

Related: A big crash ends the day for a big name at Daytona

The race went to overtime thanks to a late crash involving Kurt Busch, Ryan Blaney and a handful of other drivers. Busch, Blaney and Denny Hamlin were battling for the lead, but the wreck eliminated several drivers at the top.

During the restart, Hamlin and Aric Almirola looked to be in control early. But Dillon stormed to the front, and got right on Almirola’s bumper, causing him to crash. With the path cleared, Dillon held on for the win.

RT TO CONGRATULATE AUSTIN DILLON ON HIS DAYTONA 500 WIN! https://t.co/VmaGgYA312

Dillon only led for one lap during the entire race, but it was the only lap that mattered.

Blaney led for most of the day, and he finished the race having led 118 laps. Hamlin led for 22 and probably would’ve led for more had he not missed the pit box during his first pit stop.