Daytona leader gets a costly penalty after a big pit mistake 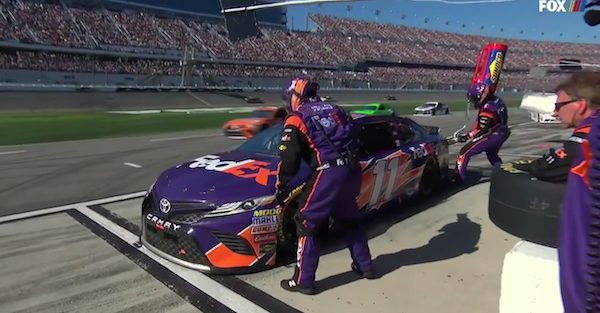 This isn’t the start Denny Hamlin wanted to the 2018 season.

Hamlin led early on at the Daytona 500, but he made a critical error during his first pit stop of the season.

As Hamlin rolled in for the pit stop, he drove past the pit box. When he started to move his car back into the pit box, his fuel man was already going to work.

Hamlin was hit with a penalty for pitting outside the box under caution, and he was forced to sit out a lap.

It’s possible there was miscommunication with Hamlin and his pit crew. NASCAR teams have one less pit crew member who is allowed to go over the wall this season.

After such a promising start to the race, and one-lap penalty is the last thing Hamlin and his No. 11 team wanted to start the Daytona 500.