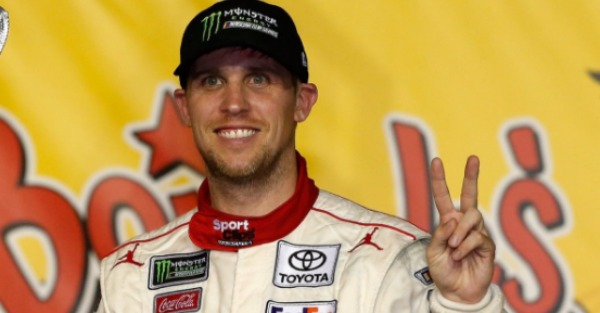 Within hours after Denny Hamlin said, on a podcast, that 70 percent of NASCAR drivers were taking illegal drugs, he said, no, he was joking.

He made the remarks to NASCAR reporter Jeff Gluck and ESPN.

?I think anyone who has listened to their podcast knows they are funny and joking around and not serious whatsoever,? Hamlin told said.?They make jokes about a lot of things.

?I literally said we get drug-tested all the time. When they asked me how many (drivers), I said I didn?t know, and they said, ?Just give us a number,? and I joked around and gave them a number that has no fact behind it. It?s getting blown up.?

That it is. NASCAR wasn’t happy, released a statement, and apparently called Hamlin in to the hauler to talk about it.

Hamlin, on a BarStool Sports podcast,  was asked if he thought there was a “significant amount of NASCAR drivers who take Adderaal or some other ADD” type medicine. After a pause, Hamlin said, “I would say yes.” When asked to put a percentage on it, he said, “70 percent.”

And that was it.

Jeff Gluck tweeted a statement from a clearly irritated NASCAR.

NASCAR conducts random drug tests regularly, and among the list of prohibited substances is amphetamines. If any competitor is found to have tested positive for a substance taken without a prescription, NASCAR has a zero-tolerance policy and the member will be indefinitely suspended. Simply put, NASCAR is confident in its drug testing program.”

Here is a statement from @NASCAR: pic.twitter.com/MplBbmaZ69

And, ESPN is reporting that NASCAR may have already addressed the remarks with Hamlin.

Assume Nascar called him to hauler for comments on radio show about drivers using Adderall to focus (they can use if Nascar knows doseage and prescribed by doctor) but Nascar has yet to confirm. https://t.co/8Apf2cU3NO

But now it seems it’s over.