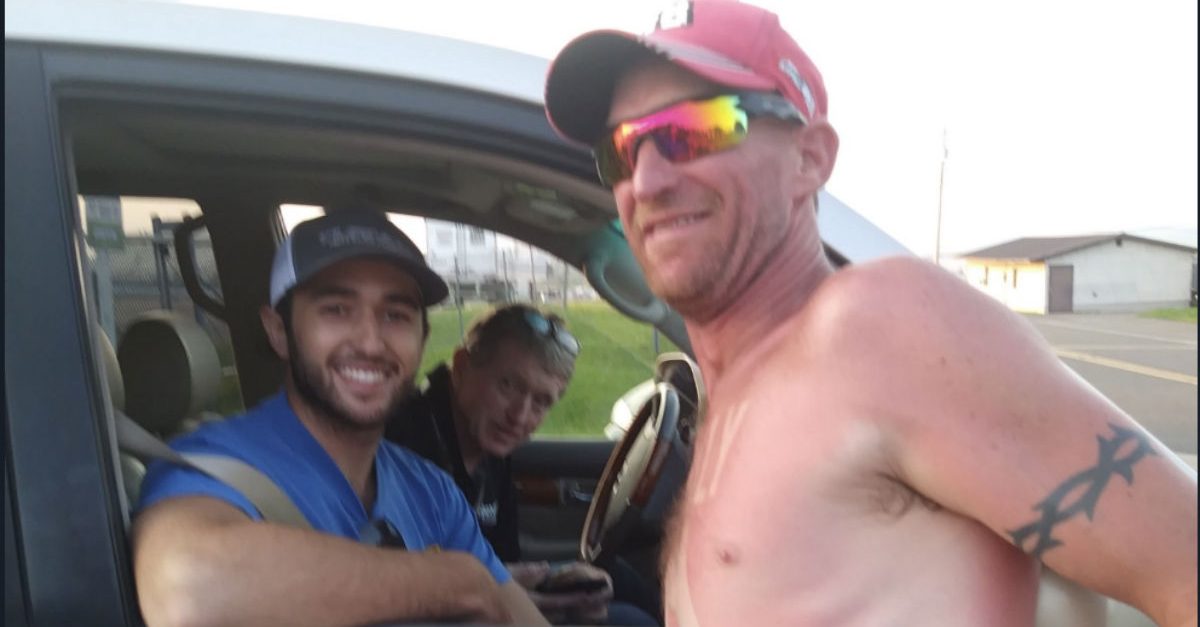 NASCAR fans will do some pretty outlandish things to express their fandom, but few actually earn themselves nicknames as a result of their antics. That being said, there are few fans who are quite like Kenny Hunt.

Known as the “Sunburn Man,” Hunt has made a name for himself by sunburning his favorite drivers on his body. For 18 years, the 37-year-old Hunt camps out once a year at Watkins Glen International — the site where Chase Elliott recently nabbed his first Cup Series race victory — and, armed with duct tape and mailbox letters, makes his very own “redneck T-shirts” in honor in some of NASCAR’s finest.

According to Hunt, the nearly 20-year tradition all started as a drunken joke among friends.

?Me and my buddies went there and spent all our money on camping and tickets and food and beverages and didn?t save any money for souvenirs or anything,? Hunt told For the Win.

?So somehow, as the day progressed and we started drinking a little more, we?re like, ?Oh, we?ll just come up with a redneck t-shirt.? So I took my shirt off and put on some duct tape ? not really thinking of what the outcome would be ? and sure enough that night, I peeled off the duct tape and then it started from there.?

Hunt first started repping Bill Elliott and Dale Earnhardt Jr., sunburning everything from the drivers’ numbers, sponsors, and various slogans on his body over time.

As you can probably imagine, ripping tape off your body around sunburned areas can’t be the most fantastic feeling in the world. But Hunt seems to have found a perfect remedy for the pain.

All that drinking, sunburn, and tape ripping ended up paying off for “Sunburn Man” fairly recently, as he actually got to meet both Chase and Bill Elliott following Chase’s Go Bowling at the Glen win at the Watkins Glen road course. Hunt ran into the father and son as they were leaving for the airport, and Chase apparently even told his dad to stop the car so that they could get a photo with Hunt, a request that he says left him “speechless.”

Hunt did admit that, following his recent run-in with the Elliott family, he will probably retire his sunburning tradition, promising to only bring it back if Chase advances to the championship race at Homestead-Miami Speedway.

?After 18 years of doing it ? and some of them have been pretty painful ? with Chase Elliott winning, it seems like the perfect opportunity to retire it,? Hunt said.

So, here’s to Kenny “Sunburn Man” Hunt: proof that not all heroes wear capes.