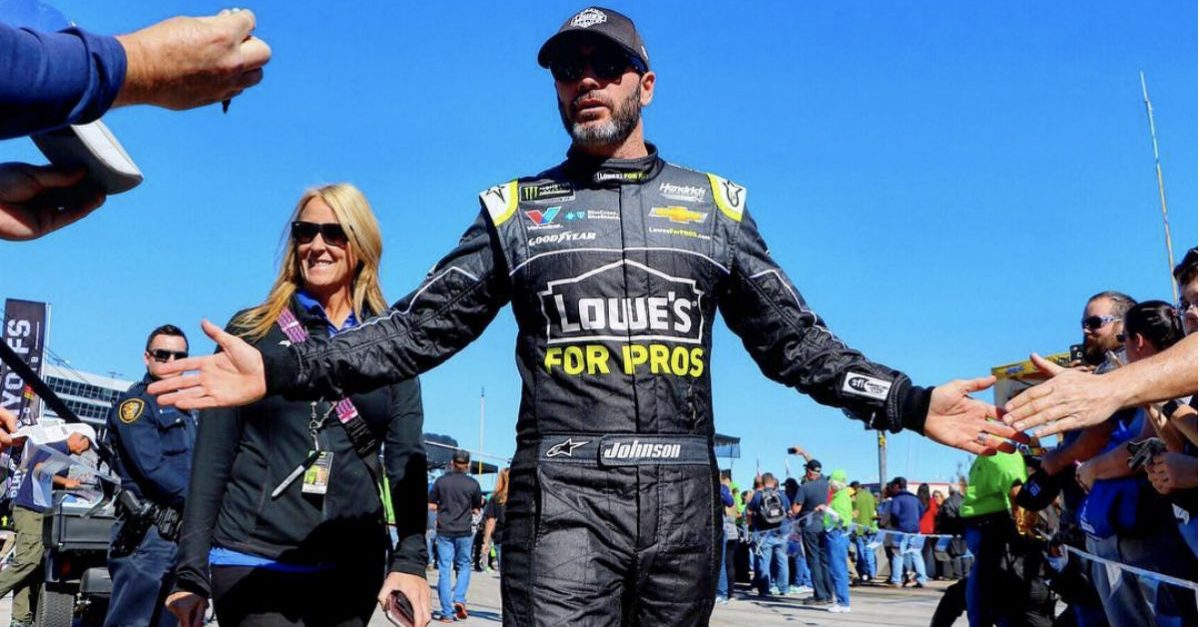 CHARLOTTE, N.C. (AP) — NASCAR did not have its finest day at Texas Motor Speedway, where things first went awry with an erroneous penalty even before the race.

Kevin Harvick won and advanced to the championship round for the fourth time in five years. His victory wasn’t all that surprising because the 2014 champion had said for months he was most looking forward to Texas because he believed it would be his winning ticket into the final four.

The drama instead came from NASCAR officiating, one playoff driver complaining that another raced him too hard and another snoozer of a race.

Jimmie Johnson was incorrectly sent to the back of the field moments before the race began. Officials in NASCAR’s scoring tower punished Johnson’s team for failing pre-race inspection three times. The problem? His car had only failed inspection two times, so the penalty was incorrect.

Well that was eventful… 🥴

NASCAR admitted the error during Sunday’s race but it was too late to remedy. Steve O’Donnell, NASCAR’s chief racing development officer, didn’t hide from the error after the event and promised steps would be taken to prevent such a blunder moving forward. O’Donnell called the mistake “unacceptable” and promised system upgrades before this weekend’s penultimate race of the season at Phoenix.

“It was one of those things, again, a human error that we’ve really got to look at and look at some additional procedures we can have in place prior to Phoenix,” O’Donnell said Monday on SiriusXM NASCAR Radio. “We’ll have those done (Monday), and we’ll be communicating those first and foremast to the team that was affected and then to the industry as well.”

Johnson, the seven-time NASCAR champion, has already been eliminated from this year’s playoffs. But he’s winless this season, just signed a new sponsor and went to Texas with just three races remaining with Chad Knaus, the crew chief who built his team in 2001. An erroneous penalty issued after he was already in his car set the tone for a rotten day that can’t be corrected.

O’Donnell was also asked to explain a penalty on Clint Bowyer, who is still in the playoffs and whose team was flagged for a crew member being over the wall during a pit stop. Except the crew member in question was actually sitting on the pit road wall, though the penalty was correct because his feet were resting on the ground. Yes, a rule was broken. But it was a call that left some wondering if NASCAR has gotten too heavy-handed in enforcing a cumbersome and confusing rulebook.

I appreciate your honesty and apology. This was just one issue of many we had today. https://t.co/J6BzrJECrD

“That’s the rule. I know people don’t necessarily like all the rules, but that’s the rule,” O’Donnell said. “If we don’t make that call, I think (media) would be asking why we didn’t.”

Had the racing been more interesting the Johnson gaffe might have become just a footnote. But the ticky-tack call on Bowyer’s team on top of it only gave fans more reason to complain. NASCAR’s on-track product has greatly deteriorated through evolving rules packages, and even O’Donnell had to admit that the entertainment was far superior in Friday night’s Truck Series race, and again in the Xfinity Series race on Saturday, to what fans got to see Sunday in the main event.

NASCAR is hoping its 2019 rules package is a move toward more action.

Texas Motor Speedway President Eddie Gossage also said the repaved Texas asphalt needs more weathering to improve the racing, which had only one real nugget of interest on the track all day: Aric Almirola took exception to Joey Logano racing him hard in the final stage. Logano already has a slot in the final four and Almirola believed Logano could have backed off a bit.

"When @HomesteadMiami comes around, and I'm not in… he'll know it."

Add @Aric_Almirola to the list of drivers not happy with Joey Logano in the #NASCARPlayoffs. pic.twitter.com/wWEeTIDw8p

“If that is the way he wants to race me when he is already locked into Homestead and we are out here fighting for our lives, that is fine,” Almirola said. “When Homestead comes around if I am not in, he will know it.”

Almirola’s anger was at least interesting — even if his is a misguided belief that Logano should go easy on drivers still chasing the remaining two spots in the season finale.

Texas was not a good race for NASCAR from start to finish. There are only two races remaining before a much-needed break and NASCAR hits a reset for 2019. The bad news is those races have a championship at stake and are two more opportunities for NASCAR to have rotten days.