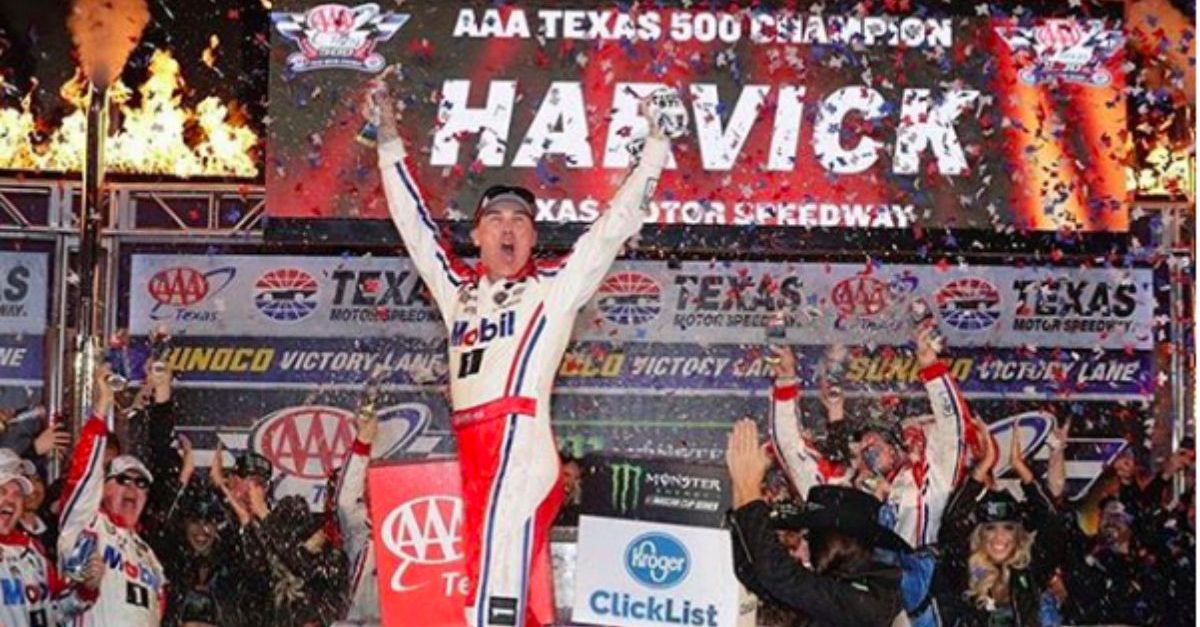 FORT WORTH, Texas (AP) ? Kevin Harvick gave the checkered flag to a young fan he brought onto the track to take a selfie ? one with the winning driver and car that will have a shot at another NASCAR Cup championship.

Harvick rocketed past polesitter Ryan Blaney in overtime Sunday, after the third restart in the final 35 laps, to win the Texas fall race for the second year in a row and take one of the four championship-contending spots for the season finale in two weeks.

“We don’t come here to count our fingers and toes to try to figure out how we’re going to make it. We want to earn it,” said Harvick, who led 177 of 337 laps. “Today we earned our way in and we’re going to go and race again next week and try to win another race and see what we can do at Homestead.”

Hoist that 🏆 up, @KevinHarvick! You're going to race #4TheCup!#NASCARPlayoffs pic.twitter.com/YennjdXQ0D

After taking the inside on the first two restarts, and briefly losing the lead after the second one, Harvick opted to start from outside for the green-white-checkered finish. By time they got to the backstretch, Harvick had pushed his No. 4 Stewart-Haas Ford in front of Blaney and raced to his eighth win of this season and 45th overall.

“I thought if I could keep him from finishing the corner I could drive back by him,” Harvick said. “It all worked out.”

Of Harvick’s 32 starts in the Lone Star State, his only two wins are the last two fall races to get into the final four. The 2014 Cup champion has 20 top-10 finishes at the 1 1/2-mile track. He won both stages Sunday, marking the fourth time this year he did that and went on to win the race.

With Harvick and Martinsville winner Joey Logano in the No. 22 Ford of Team Penske locked in, the series goes to Phoenix next week with only two spots up for grabs for the championship run at Homestead.

Kyle Busch, a seven-time winner this year, and defending Cup champion Martin Truex Jr. are among the other six title contenders. They are comfortably above the cut line for points, but Chase Elliott or any of Harvick’s three SHR teammates ? Clint Bowyer, Aric Almirola and Kurt Busch ? could advance with a win in Phoenix.

Logano was third at Texas. Elliott was sixth, followed by Kurt Busch and Almirola, who had also gone to the rear at the start of the race for unapproved body modifications. Truex, who was close to clinching a title spot before that bump-and-run by Logano on the final lap to win at Martinsville last week, finished ninth.

Kyle Busch was 17th and Bowyer 26th after starting on the front row but making contact with Denny Hamlin on the first lap.

After the first of the late restarts, Harvick was on the inside and was able to keep Blaney from clearing him on the backstretch. Harvick was already starting to rebuild his lead ? it had been nearly 4 seconds before the caution ? when another yellow flag came out.

Harvick was on the inside again for the next restart, but Blaney was able to get by him for the lead. Blaney led seven laps before Harvick went under him and was again putting distance between them before Joey Gase’s spin brought out the last of eight cautions.

"Sometimes I need a reminder of what you mean to people, and why you come to these (@NASCAR) races."

Since having kids, @KevinHarvick loves doing stuff like taking a selfie with a fan. #4TheCup #NASCARPlayoffs pic.twitter.com/ZHwhPWq3lf

“They were hard. They were challenging,” Blaney said about the restarts. “That was really the only shot we had to beat him, to be honest with you. We got by him one restart and I just couldn’t hold him off. … The last one, he took the top, like I knew he was going to go. He motored around me.”

Truex had to start at the rear of the field because of an engine change. He also dealt with a loose tire and had a pass-through penalty during the race for driving through too many pit boxes, and was a lap down before getting that back one the first of the late cautions.

“We got a little bit of luck on our side after that to be able to get back on the lead lap. Happy about that for sure,” he said. “To start exactly where we were I think is a decent day. The only difference is there’s one less spot available.”

Truex has vowed that Logano won’t win the Cup title after what happened at Martinsville. Now Almirola is upset with Logano after one of the late restarts in Texas.

“He just continues to make things harder on himself,” Almirola said.

After working himself back to the front of the field, Almirola said Logano “about wrecked” them both after coming down into his door in Turn 3.

“If that’s the way he wants to race me when he’s already locked into to Homestead and we’re out here fighting for our lives, that’s fine,” Almirola said. “When Homestead comes around, if I’m not in, he’ll know it.”

Logano said they were still racing at the end in a tight turn.

"When @HomesteadMiami comes around, and I'm not in… he'll know it."

Add @Aric_Almirola to the list of drivers not happy with Joey Logano in the #NASCARPlayoffs. pic.twitter.com/wWEeTIDw8p

ERROR TO THE BACK, AND A SPIN

Jimmie Johnson was sent to the rear of the field after the No. 48 Chevrolet twice failed prerace inspection.

NASCAR later said it erred in penalizing Johnson at the start of the race because his car passed inspection the third time. He had qualified 23rd for his 600th start with Chad Knaus as his crew chief.

“There is no format for the teams to communicate to the tower. So, whatever the tower says is the way it is,” Johnson said. “This is just one of a few calls that have been wrong due to that situation. I don’t know how they do it.”

Johnson’s teammate with Hendrick Motorsports, William Byron in the No. 24, was sent to the back of the field after three failed inspections.

Just short of 100 laps into the race, Johnson got loose and wiggled in front of Byron that led to contact and a spin for the No. 24.

UP NEXT: The last race in the third round of the playoffs, Sunday at Phoenix. Harvick won there for the ninth time earlier this season.