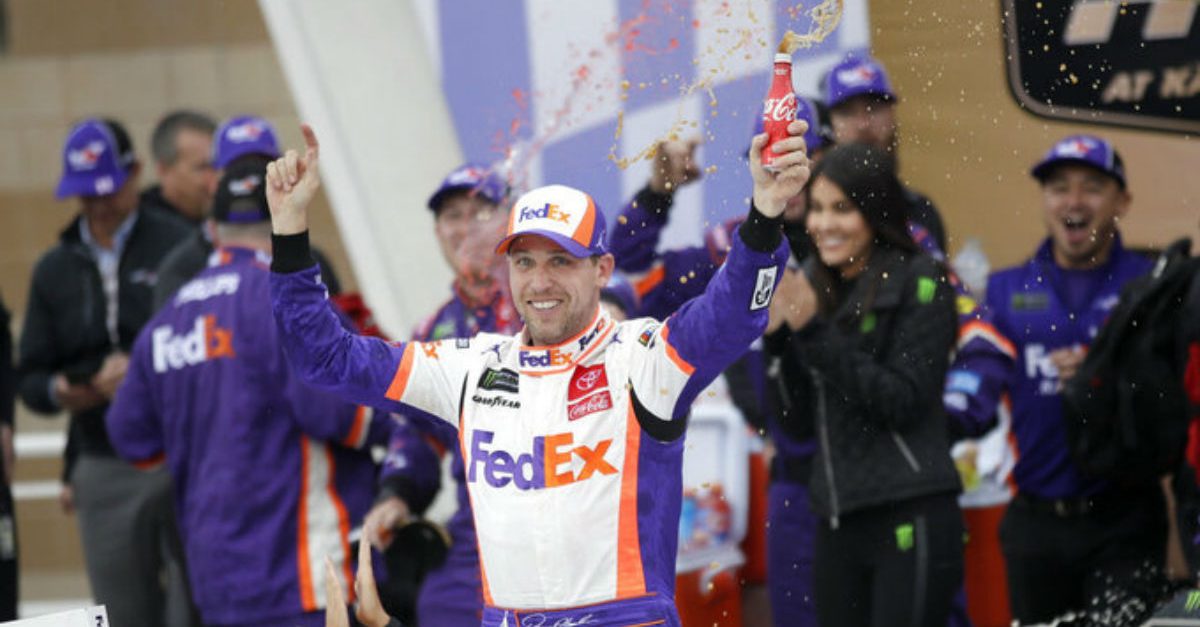 Elliott managed to finish second and advanced to the round of eight on points when Keselowski, whom he’d been dueling with all afternoon, got boxed in on the restart and lost too many spots.

In a bit of irony, it was Keselowski who helped bring out the caution on the first try for the green-white-checkered finish when he got into Daniel Suarez. The field was nearing the start-finish line but the caution light came on before the leader took the white flag, forcing a second overtime.

If Hamlin had crossed a split-second quicker, the race would have been over and Keselowski safe.

Kyle Busch ultimately finished third, followed by Kurt Busch and William Byron. But the key was Keselowski, who dropped from 13th to 19th on the final restart and out of the next round of the playoffs. He ended up three points ? equal to three positions on the track ? below the cutoff line.

Byron was the next driver eliminated despite a strong run at Kansas, where he would have needed a win to advance. Alex Bowman and home-state hero Clint Bowyer also were eliminated.

The win was the fifth this season for Hamlin, who already was in good shape to advance but picked up valuable playoff points with the win. He had finished in the top five at Kansas twice in the past couple years, but the trip to victory lane was the first for his Joe Gibbs Racing team since 2012.

“This is a great feeling. That car was awesome,” Hamlin said. “I’m happy for the whole team. We’ve been running good and just cannot wait to get to Martinsville.”

The frenzied push to the finish began when Blaney scraped the wall, causing his tire to go down and a caution to fly with 14 laps to go. Elliott was three points behind Keselowski at that point, but the savior of Hendrick Motorsports’ playoff hopes made a big move on the restart to climb into fourth place, and that put the pressure right back on Keselowski to make up ground.

Elliott appeared to be in good shape before another caution flew, jumbling up the front of the pack and giving Keselowski a chance. He made a quick stop and picked up three spots on pit road, and that put Elliott back into a situation where he would need a victory to advance.

The entire field got through the restart cleanly, but Keselowski ran out of room deep in the pack and nudged Suarez, sending him into the wall. Penske Racing teammate Joey Logano also picked up heavy damage in the wreck, throwing his playoff hopes into question as another OT approached.

Hamlin got a good jump on the restarted, getting pushed by teammate Kyle Busch, and Elliott sucked down low and got in line. He made the move forward into second place while Keselowski dropped back deep in the field, and the swapping of positions was enough to send Elliott into the next round.

Read More: Looking Back on the Career and Legacy of Bobby Allison