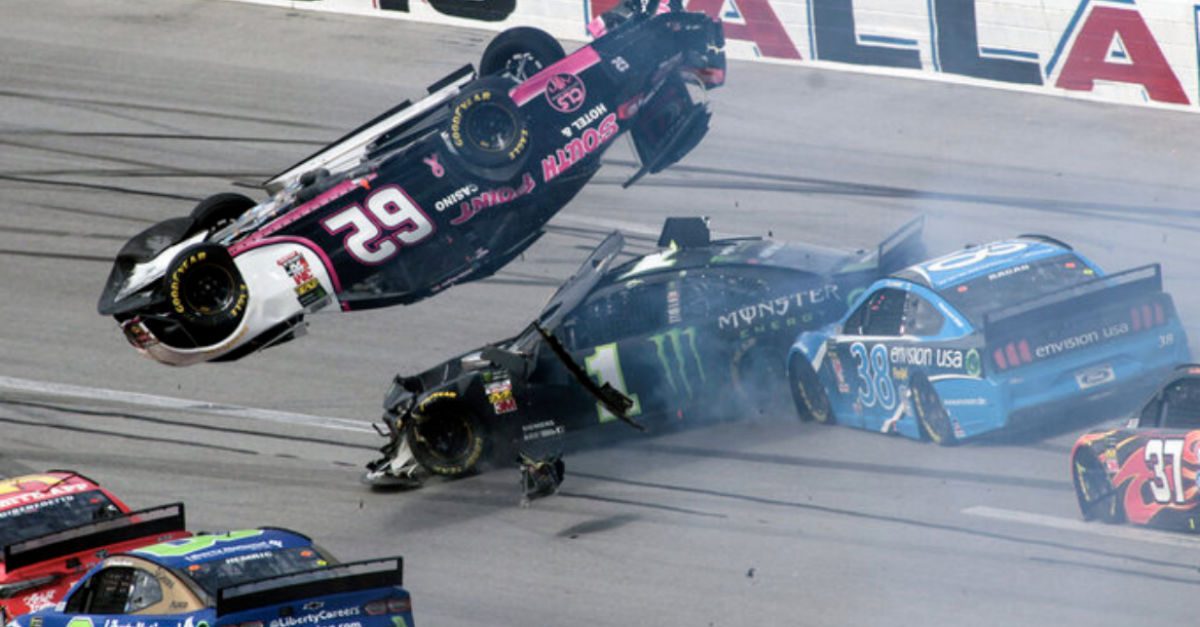 The NASCAR playoffs are playing out with all the drama Brian France envisioned for the elimination-style playoff system he helped launch in 2004.

After multiple tweaks and changes since then, the NASCAR postseason now has what France liked to call “Game 7 moments,” the kind of I-shouldn’t-miss-this attraction for fans that comes with, say, the Final Four, the NFL playoffs or October baseball. This year, this tension has been building since the playoffs began six weeks ago and the elimination race at Kansas Speedway over the weekend, with a wild finish that went into double overtime, did not disappoint.

Chase Elliott basically had to win Sunday to keep his title hopes alive; short of that, he needed a total collapse from someone ahead of him in the standings. Well, he nearly won the race but finished second to Denny Hamlin and still advanced because Brad Keselowski fell apart.

As Elliott was charging to the front of the field, Keselowski was literally falling backward in a fascinating split-screen showcase of the drivers’ push for the final spot in the round of eight.

Neither driver was predicted to be in that position ? both Keselowski and Elliott went into the playoffs as legitimate championship contenders ? but Kyle Larson and Ryan Blaney both grabbed slots in the next round with surprise victories. The win-and-advance model rolled out in 2014 has thrown Larson and Blaney into the mix and ended a potential title run for one of the strongest teams from the regular season.

This is everything France wanted when he first launched the Chase ? what the system was called in 2004 ? and he made major changes four different times trying to get it right even as some longtime fans stopped watching. Critics called it a gimmick and manufactured drama, and grumbled the old season-long title march was the preferred method to crown a champion.

It has taken all those tweaks and years to settle in to show that France’s vision was the right one for NASCAR, with its relentless, 10-month season and events that run three-plus hours, to remain relevant in the fast-changing sports and entertainment landscape.

France was correct, even if the system was contrived. The sport needed its version of walk-off home runs or last-second touchdown passes to spice up the action.

France is now far removed from this system and the sport itself, his departure from the family business becoming officially official Friday when NASCAR and sister company International Speedway Corp. merged into one organization with NASCAR chairman and CEO Jim France continuing in the same role. ISC chief executive Lesa France Kennedy was named executive chair and NASCAR president Steve Phelps tabbed president in charge of overseeing day-to-day operations of the merged companies.

Brian France, who stepped away as CEO of NASCAR following his August 2018 drunken-driving arrest, is not named in the new leadership structure.

Jim France has said very little publicly since replacing his nephew nearly 15 months ago and he leaves it to Phelps to talk about the future of NASCAR. But it is no coincidence that business has been rolling since Brian France stepped down and his uncle steadied a seemingly sinking ship. Booming might be a stretch, but things are happening behind the scenes at a markedly improved pace that has benefited the product.

A new rules package was rolled out this year designed to make the racing better, and although it has received mixed reviews, the on-track action is better than it has been the past several seasons. Work continues to be done on the “Next Gen” car scheduled to be introduced in 2021; the car is intended to reduce costs, in large part via common parts from approved vendors, which will shrink the required workforce and tighten many loopholes for creativity and innovation.

This test has been a blast so far. It’s fun talking about different types of adjustments. The car stops on a dime. Lots to look forward to in the future. #NextGen #NASCAR

The hard work is in keeping older fans, attracting new ones and marketing NASCAR, particularly its playoffs, as can’t-miss-viewing.

Those who have watched through the first two rounds have seen an intense and sometimes heated scramble for points and positions as no driver has emerged as the clear favorite. Joe Gibbs Racing, with three wins through six playoff races, has three drivers atop the standings but anything can happen starting Sunday at Martinsville Speedway in Virginia. Reigning series champion Joey Logano is the defending race winner, and he staved off elimination himself at Kansas after a crash in the waning laps put him on the bubble against teammate Keselowski.

The title race has gone down to the finale in every year since Brian France created this system, and the champion has had to win at Homestead-Miami Speedway to cement the crown the last five years ? every year of the elimination format ? just as Brian France wanted. Fans of the way things used to be still turn their noses up at a system they find phony or engineered all for the sake of excitement.

But it is exciting, and Brian France’s system works. He’s just not around for the vindication.