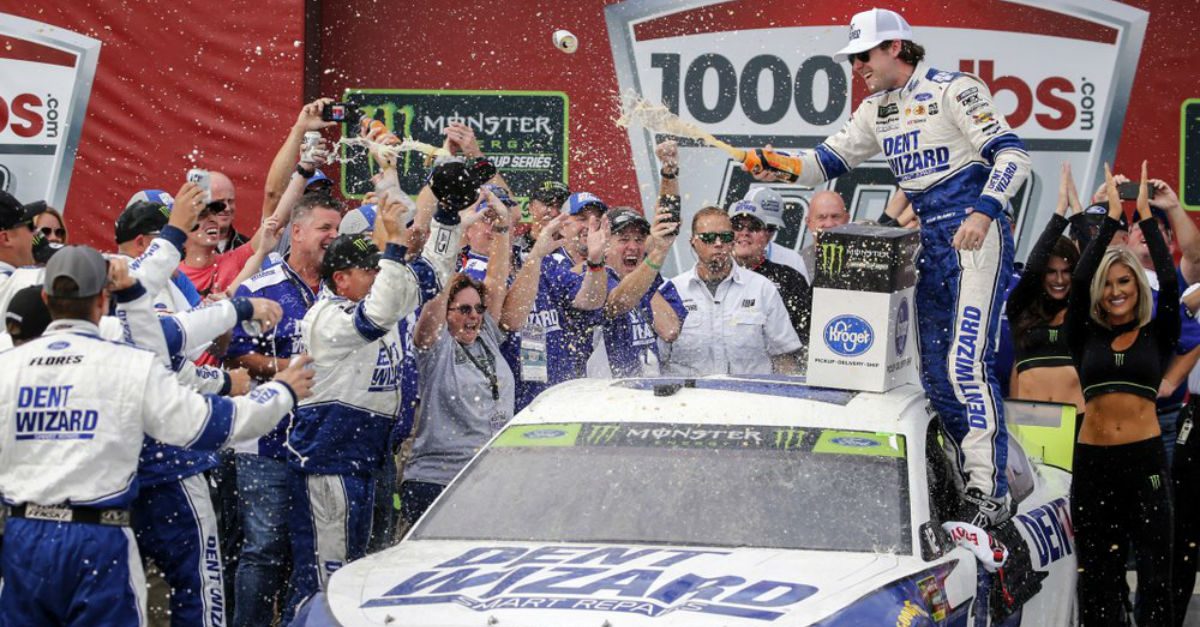 TALLADEGA, Ala. (AP) — Ryan Blaney emerged safely from the wreckage at Talladega Superspeedway that claimed other playoff contenders, winning by a tiny margin that was huge for his championship hopes.

Blaney beat Ryan Newman in a door-to-door race to the finish line to win Monday and advance to the third round of NASCAR’s playoffs.

Blaney’s first win of the season came as he was in danger of getting eliminated from title contention. The playoff field will be trimmed from 12 drivers to eight next weekend at Kansas. Blaney had little margin for error after he had mechanical issues at Dover last weekend and finished 35th.

“Our mindset really was we had to win one of these two races,” Blaney said. “We were so far back in points. I know Talladega’s a wild card. There was a lot of wrecks today and a lot of guys got tore up. But we didn’t really get any stage points and we were already pretty far behind the eight-ball.

“We knew we had to probably win one of these two weeks. It’s just a huge relief.”

Blaney joins Kyle Larson in the round of eight, with six spots still available.

After the win, he spotted a young fan in the crowd wearing his shirt and handed the boy the checkered flag.

The race began Sunday but was postponed by rain after the first stage. The delay gave Blaney time to recover from a Sunday spin as he tried to enter pit road, and ended with Ford and Team Penske as winners. Ford had won seven consecutive Talladega races until Chevrolet snapped that streak in April.

“An amazing effort the last two days, to be honest with you,” Blaney said. “From spinning out early yesterday, missing some big ones today, weave our way through … It just means a ton. I’ve been coming here ever since I was really young. I love coming here. Love it even more now.”

Blaney was the leader on a restart with two laps remaining and had a huge push from fellow Ford driver Aric Almirola to gain space on the field. Then Newman came charging along on the outside line with help from Denny Hamlin and he easily zipped past Blaney.

But the Ford train remained committed and Blaney got another push from Almirola to pull alongside Newman. The two raced door-to-door to the finish line, with Blaney winning by a nose. The 0.0070-second margin of victory was the sixth-closest in the history of Talladega, which celebrated its 50th anniversary all weekend.

The win capped a remarkable weekend for the Penske organization, which on Saturday claimed the IMSA overall sports car championship with Dane Cameron and Juan Pablo Montoya, and then in Australia won the Bathurst 1000 with Scott McLaughlin and Fabian Coulthard.

It was Ford’s sixth straight Talladega playoff victory and Team Penske’s seventh win in the last seven Cup races at the Alabama superspeedway.

The race had critical playoff implications as many of the title contenders struggled, and Hendrick Motorsports’ entire lineup is at risk of elimination next weekend. Alex Bowman, Chase Elliott and William Byron are all below the cutline, as is Kansas native Clint Bowyer, who could be eliminated at his home track.

Newman, who was followed by Hamlin in a Toyota, said he knew Blaney was ahead of him at the line.

“I think I could have gone down and taken his air and he probably would have gone to the outside of me,” Newman said. “That would have spun me as I tried to block me. You could replay it 30 days from now and come up with 27 different answers.”

It was a 1-2 sweep for Ford on a weekend in which manufacturer alliances were heavily scrutinized. Although all the manufacturers met with their teams to discuss strategy and sticking together for the sake of a brand victory, a meeting Sunday between the Chevrolet group angered fans who argued the alliances were a form of race manipulation.

Although the manufacturers have been doing this for at least five years in a Toyota-led effort, Chevrolet did not get on board until April after Toyota had worked with Chevy drivers from Hendrick Motorsports to go 1-2-3 in the Daytona 500. Chevrolet then won at Talladega and again at Daytona in July, the two tracks where the brand alliances work.

The race was stopped with seven laps remaining after an accident at the front of the field. Stenhouse and Kyle Busch were side-drafting for the lead when Busch suddenly spun to the right, directly into title contender Brad Keselowski. The chain reaction caused Brendan Gaughan’s car to flip over the car of Kurt Busch and land on its wheels.

“Mother, it is OK, it is just a flip and it didn’t hurt, I promise,” Gaughan said into a television camera. “It was just one easy, quick flip and we put it down.”

Keselowski’s car was destroyed, but he got it rolling down pit road for the sole purpose of passing Gaughan and Martin Truex Jr. in the running order, gaining two more points that very well could be needed next week when the playoff field is cut.

Two of the Hendrick Motorsports title contenders had terrible days as both Bowman and Byron caused multi-car accidents.

Bowman triggered one in the second stage when he tried to block Joey Logano, who hit him and sent Bowman spinning into traffic.

“My guess is that I threw a block I shouldn’t have,” Bowman said. “I got shoved way out there. I knew (Logano) was coming and I just tried to move down just a little bit. … They just had a bigger run than I realized. I should have let him go and shouldn’t have thrown a block.”

The elimination race of the third round of the playoffs is Sunday at Kansas Speedway. Elliott is the defending race winner, and Keselowski won the spring race.

Read More: NASCAR Throwback: Was the Worst NASCAR Race in History the 1969 Talladega 500?