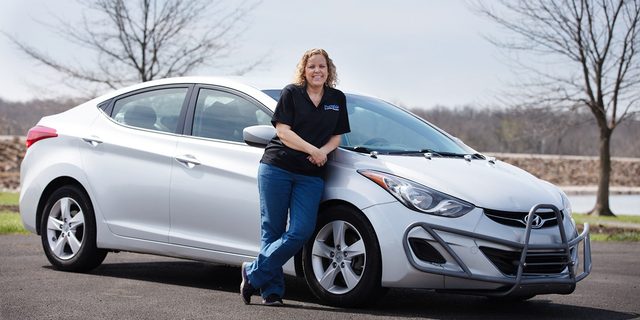 One Hyundai Elantra owner has logged some serious miles. One million miles in only five years, to be exact.

Olathe, Kansas resident Farrah Haines averages roughly 200,000 miles a year in her Hyundai Elantra, crisscrossing the nation for her job as an auto parts delivery driver. All of the miles on her Elantra were driven on its original drivetrain. To commemorate the occasion, Hyundai and partner agency INNOCEAN Worldwide Americas released a promotional video that covers the Hyundai owner’s story, paying tribute to the brand.

“This is not only a milestone for Farrah, but also for Hyundai and the quality of our vehicles,” said Dean Evans, who is the Chief Marketing Officer of Hyundai Motor America. “Reaching one million miles with the original powertrain in just five years is an extremely rare and incredible achievement. We created the 1 Million Mile Emblem because we believe in making things better for our loyal customers and look forward to other Hyundai drivers joining Farrah in the one million mile club.”

In turn, Haines has nothing but positive things to say about her high-fuel economy Hyundai Elantra compact sedan, which she gets an oil change for every two weeks.

?I love to drive and have made a successful career out of it, so it was no surprise that I was able to get to a million miles,? Haines said. ?The key is to prioritize regular maintenance and to have a quality vehicle.?

In a token of appreciation, Hyundai awarded Haines a brand new car! On top of the 2019 red Hyundai Elantra, Haines also got her very own ?1 Million Mile emblem.? Verifying the one million miles was an extensive process, requiring a check of her odometer, engine casting numbers, and mileage records along with a separate VIN and Carfax report. For greater perspective, she averaged 548 miles a day, a glowing number compared to the 14,000 miles a year by the average U.S. driver.

Here’s to Farrah clocking another million miles in her new shiny red Hyundai Elantra in less than half the time.

Read More: Supercar Drag Race Pits 9 of the World?s Best Against Each Other, Including Mercedes-Benz AMG GTS Edition 1 and Ferrari F12