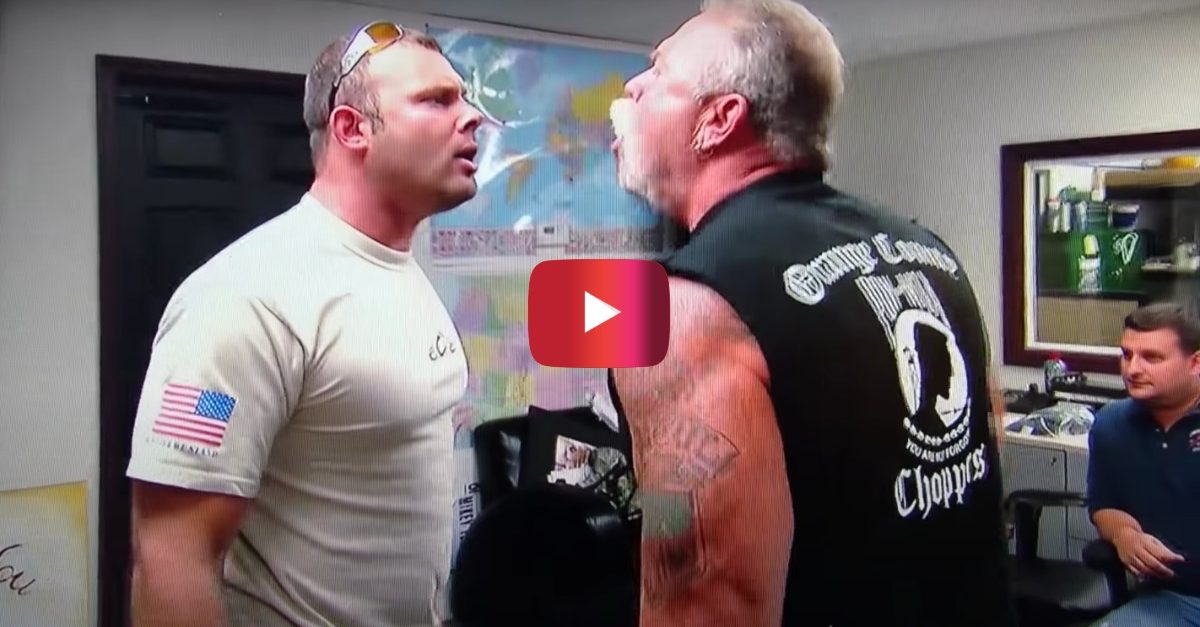 It’s no secret that American Chopper has had some pretty intense moments between the father-son business partners at Orange County Choppers. You’ve probably even seen some of the hilarious memes on social media that have been created from some of the arguments on the Discovery Channel reality show.

Paul Teutul Sr. and Paul Teutul Jr. definitely had their issues over the years. Sometimes, they could work it out, and other times, things really boiled over. Although they continued the series with new seasons of the spin-off American Chopper: Senior vs. Junior, the original American Chopper TV show really captured a full view of the tension within the Teutul family business.

Below, we’ll look back on three of the wildest fights that occurred between Senior and Junior.

In this first clip, Vinnie Dimartino comments towards the beginning about the tension that he could feel in the shop. Shortly after, Paul Jr. realizes that he messed up the measurements on the custom motorcycle while he was putting the bike together. Paul Sr. was quick to share his thoughts about the screw-up, and he continued to get frustrated and call out different issues in the shop.

Mikey Teutul even comes on screen to comment on the uneasiness. Senior receives a phone call and lets Paul Junior know that he needs to be at the shop early to meet a customer. After Paulie says he can’t make it, the two start to have a conversation about how many hours they are working each week at the shop. It didn’t take long before things got heated.

This scene jumps right into a discussion between Sr. and Jr. about who was going to be lacing the spoked wheels for the custom bike they were building. While Paulie had the idea to do it in house, Senior wanted to send them to a different shop to do the job. They started to get frustrated with each other and go back and forth about who has the power to do what with the company. Shortly into the argument, again, Senior brings up the amount of time that Paul Jr is at the shop.

The two end the discussion, but not long after, Paul Jr. decided to go into Senior’s office to work out the issue. What started off as somewhat calm talk about the bike wheels ended up transitioning into an argument about who is making the right choices for the future of OCC. After getting in each other’s faces, Junior states, “You’re going to bury this company” before storming out the door.

Rick comments on what their fighting is doing to the shop morale. After a little time passes, the two eventually get back together, apologize to one another in a heartfelt moment, and proceed to apologize to the entire staff at the shop.

Now, we get to the big one. This argument is definitely the most well-known today, and it was a moment that was bound to happen eventually. At this point in the show, it was certainly not the first time we had seen the father and son fight, but I don’t think anyone expected this disagreement to escalate the way it did. Ultimately, this is the fight that finally led Paulie to start his own company, Paul Jr. Designs, which was featured in the new episodes of the reality TV show spin-off after this season.

Senior calls Junior into his office to accuse him of not pulling his weight and not abiding by his contract. Senior lays into him, reading his contract, and explaining exactly what he’s upset about. As soon as Junior has time to say his peace, things begin to get extremely tense. Paulie insults the way that Senior runs the company, throws a chair at the office wall, and storms out. Before he can leave the building, Senior lets him know that he’s terminated for good.

It was quite a wild ride watching the reality television series unfold in real time back in the day. Some people out there think that these fights are scripted, but these are real issues that the Teutul family dealt with for many years. Paul Jr. getting fired and starting his own business actually was probably the best choice they could have made at the time.

These are just a few examples of the drama, but when it comes down to it, there’s just nothing that quite compares to the original American Chopper series.