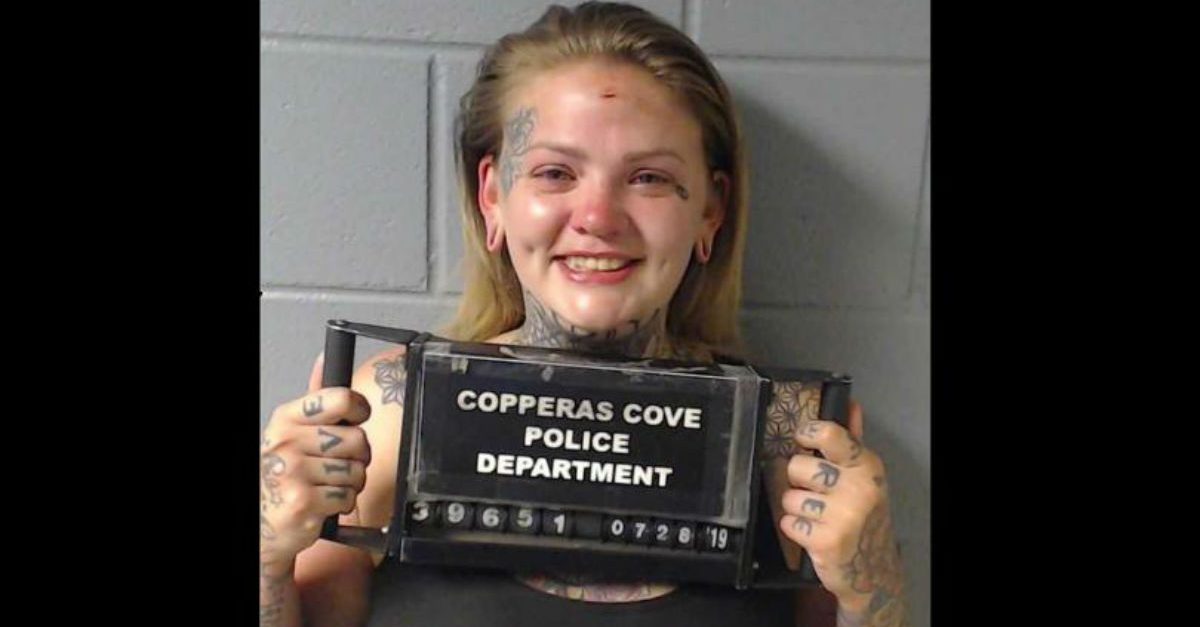 Samantha Vaughan won’t be winning “Mother of the Year” anytime soon. In the early morning hours of Sunday, July 28, the 26-year-old Copperas Cove, Texas woman was arrested after leaving her baby son in a running car to take shots at a nightclub. You know how they say “drink responsibly” at the end of most alcohol commercials? Yeah, this is the complete and total opposite of that.

Now, as if Vaughan’s actions weren’t bad enough, when local law enforcement arrived on the scene, she got, well, in a word, “combative.”

When officers asked her if she had consumed alcohol, she told them she had two shots, according to the affidavit.

Then she yelled, “You will not take my child and place her with a f*** (N-word),” the affidavit said.

When tested later with a preliminary breath test device at the Copperas Cove Police Department, her blood alcohol level was 0.148. The legal limit for driving in Texas is 0.08.

Vaughan told the officers she drove to the club to pick up her husband and went inside to use the bathroom. Then, she said she found her husband and sat with him while she drank the two shots.

As officers started to take her into custody, she tried to pull away and dropped to the ground. Then, according to the affidavit, she “continued to thrash her body around…yell and throw herself about.”

Officers say she got a small cut on her forehead after she hit her head into a steel bar inside the patrol car.

Wow. You know what they say: the only thing worse than a negligent parent is a racist negligent parent. Ok, they don’t actually say that, but what they do say is that drunk words speak sober thoughts, so that drunken outburst was probably years in the making.

Vaughan is facing a criminal charge of abandoning/endangering a child with intent to return, while her husband/drinking buddy won’t be facing any charges at this time. So I guess that makes him the slightly better parent? A pretty pitiful consolation prize, if we’re being honest.