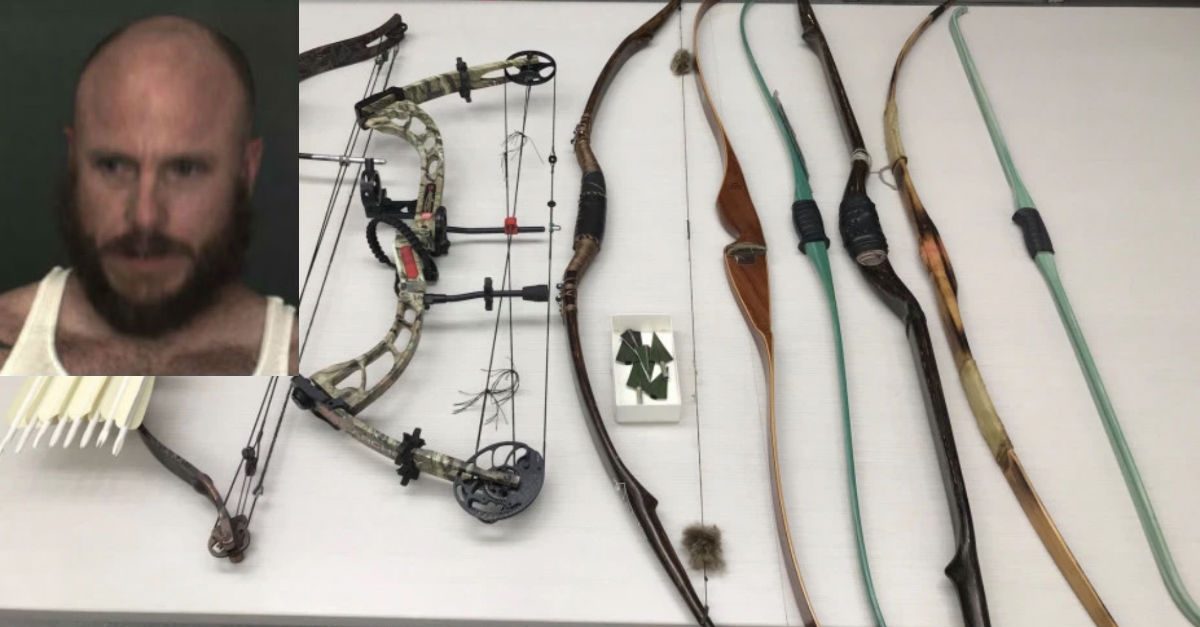 Archery is a fun activity and all, but there is a time and place to play with bows and arrows. Shooting targets in your backyard? Acceptable. Brushing up on your skills at an archery range? Also acceptable. Firing off arrows into busy traffic from the tailgate of your truck? Not a good look. Not a good look AT ALL. You just can’t do that.

Well, that’s exactly what one man from the California town of Big Bear was accused of doing, and SPOILER ALERT, he got arrested. I know, huge shocker.

Per The San Bernardino Sun:

The incident happened on Aug. 18 in the area of North Sierra Avenue and North Shore Drive. Deputies responding to the area encountered Jathon Musella, 37, who was in possession of bows and arrows, a news release said. Deputies, however, did not see Musella shooting the arrows, and no damage could be found.

On Friday, Aug. 23, detectives served a search warrant at a home on the 100 block of East North Shore Drive, where they seized bows and arrows, according to the press release.

Musella was arrested on suspicion of willfully projecting an object at a vehicle, a felony violation of the vehicle code.

Now, of course, it’s important to stress than Musella was an alleged offender in this case, since police didn’t see him actually slinging the arrows and there was no observed damage to any vehicles. Then again, it’s hard to imagine this guy isn’t the most guilty that you can possibly be.

He had enough bows in his truck to arm a small army. Not that transporting more than one bow is a crime in and of itself, but you know, it’s pretty damn suspicious to have that many bows. You’re moving past the recreation stage with that many bows. You need one, maybe two bows. Anything more and you’re about as shady looking as this dude looks in his mugshot.

Read More: Can You Shoot an Arrow Through a Windshield? Check out This Video to Find Out!