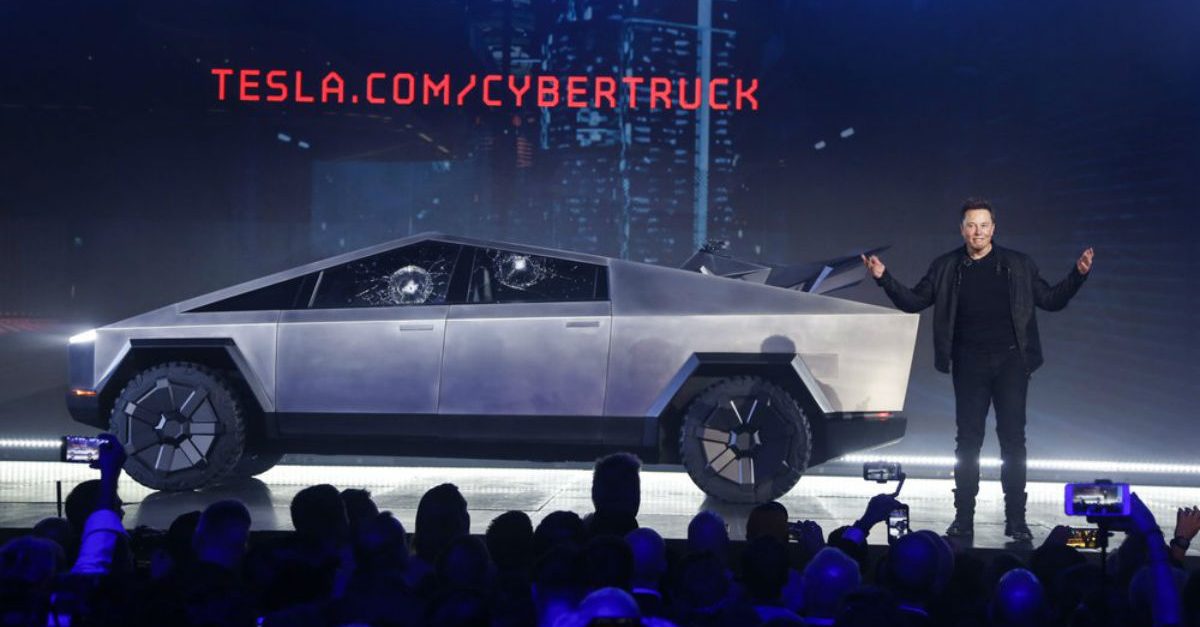 The unveiling of the Tesla pickup truck was a smash hit. Literally.

On Thursday, November 21, Tesla CEO Elon Musk officially unveiled the Cybertruck at its design studio in Hawthorne, California. Among the Cybertruck’s many features that Musk touted during his time on stage was the pickup’s armored windows. To test their durability, Musk had Cybertruck design lead Franz Von Holzhause throw a metal ball at them. Twice.

As it turns out, the demonstration didn’t exactly go how Musk had planned, with the glass smashing following both of Von Holzhause’s attempts.

?We threw wrenches, we threw everything even literally the kitchen sink at the glass and it didn?t break,” Musk told the audience following the embarrassing mishap. “For some weird reason, it broke now. I don?t know why. We will fix it in post.?

This failed demonstration came after Von Holzhause took a sledgehammer to the side of the truck, hitting it several times without leaving a scratch or dent. Can’t win ’em all, we guess.

Nobody *expects* the Cybertruck pic.twitter.com/khhYNFaVKs

What’s the Scoop on the Tesla Cybertruck?

Musk, who claimed that the Cybertruck was ?bulletproof? against a 9mm handgun, made a slew of bold claims during the unveiling. The base version of the truck will start at $39,000, and as Musk has said several times before, it will be better at towing and hauling than a Ford F-150 and perform as a better sports car than a Porsche 911.

Using an adaptive air suspension system, drivers will also be able to adjust the ride height of the truck. Storage-wise, the Tesla pickup will have bed with a sliding cover as well lockable storage spaces under the hood and in the sides. For an additional $7,000, buyers will be able to choose Tesla’s “self-driving” option.

Features aside, many experts don’t seem to think that the Tesla Cybertruck will really do that much to make an impact on the pickup truck market.

“It will be a niche product at best and poses no threat in the pickup market as we know it today. The other downside is that this truck will have no federal tax credits by the time it comes out,” said Matt DeLorenzo, senior executive editor at Kelley Blue Book.

This article, originally published November 12, 2019, was updated to include the unveiling news.

Since teasing its release in 2013, Tesla CEO Elon Musk has made plenty of promises about his company’s electric pickup truck. He’s claimed it would have a 300,000-pound towing capacity, more than 22 times greater than the Ford F-150’s max standard towing capacity. He’s said it would be a better sports car than the Porsche 911. He’s also said that it would cost less than $50,000.

While you obviously have to take promises like these will a grain of salt (a 300,000-pound towing capacity? Get real!), there are a few things about Tesla’s upcoming pickup that are more set in stone. Here’s what we know so far about the Tesla electric truck.

About a minute in, we flashed a teaser pic of Tesla cyberpunk truck pic.twitter.com/hLsGsdyuGA

In a tweet sent on November 6, Elon Musk announced that Tesla’s pickup truck — currently referred to as the “Cybertruck” — will debut at the SpaceX rocket facility in Los Angeles on November 21, which is also the last day of the press preview of the Los Angeles Auto Show.

The date of the unveiling along with the futuristic, cyberpunk theme is no coincidence, as fans of the classic science-fiction movie Blade Runner will probably recall that the film actually takes place in Los Angeles in November 2019. Musk alluded to this connection back in March, before releasing a teaser image of the Cybertruck.

The date is strangely familiar …https://t.co/YZl5R1POJL

Besides Musk’s outlandish claims regarding the Tesla truck’s specs, not too much is known about it. Car and Driver speculates that it will likely have a high-performance powertrain and dual electric motors offering all-wheel drive and high levels of torque. In any case, those are least the bare minimum specs that we can expect from Tesla’s pickup, if it’s meant to boast even half of the power and towing capacity that Musk says it will.

As far as a charging system goes, it will also likely be equipped with an 800-volt system, similar to the type offered on the upcoming Porsche Taycan EV. Of course, it wouldn’t be a Tesla electric car without all the bells and whistles inside, including driver-assistance features.

Several automakers are hoping to cash in on the electric truck trend. Rivian, an electric vehicle company that Ford is heavily invested in, is rolling out the Rivian R1T, which is geared towards campers and off-roaders. Ford is also working on an electric F-150, while General Motors is developing an electric pickup as well, after selling its shuttered Lordstown, Ohio plant to Lordstown Motors Corp., an electric truck manufacturer.

In early November, Volvo already kicked off European sales of its electric truck, those it is more closely aligned in design to the all-electric Tesla semi truck as opposed to the Tesla pickup.

Read More: She Showed up to the Gas Station in a Tesla, and These Dudes Couldn?t Stop Laughing