One of Cadillac Ranch’s Oldest Vintage Cars Set on Fire 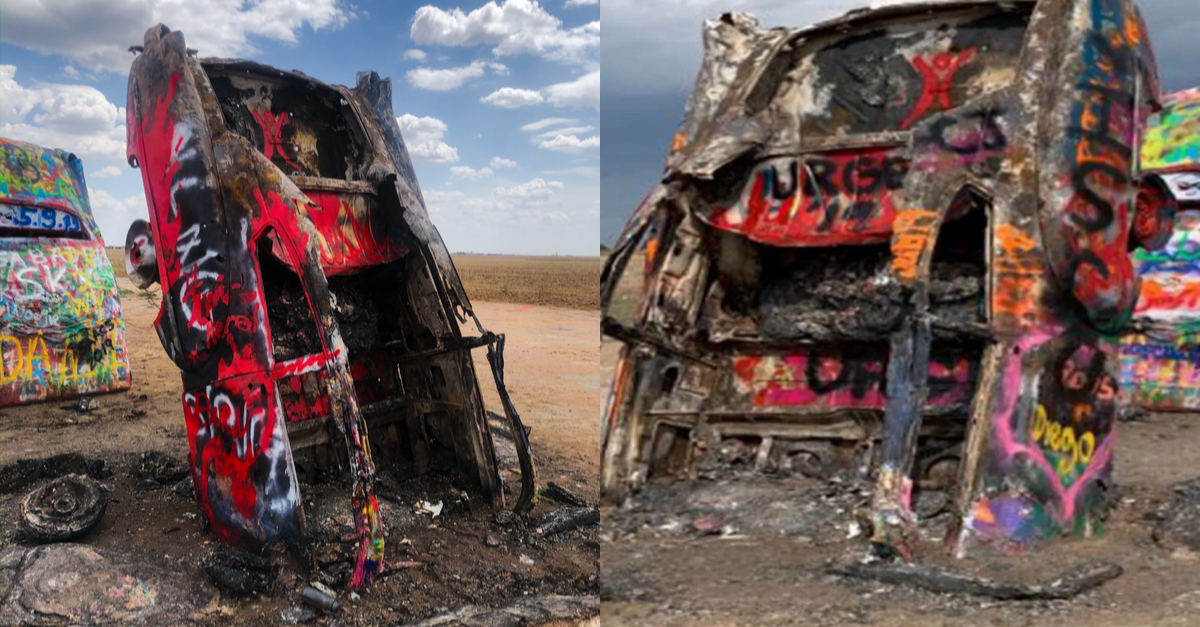 A West Texas public art installation featuring 10 half-buried classic Cadillacs, which has captivated tourists since the 1970s, is now the site of a potential vandalism case.

Folks who attend Cadillac Ranch can spray paint vintage cars to their heart’s content, but at least attendee of the Amarillo-based attraction didn’t have any intention of doing any spray painting. Earlier this week, a fire broke out at Cadillac Ranch in Amarillo, which police are currently investigating.

One of the oldest cars in the collection was burned in the fire. Fortunately, the car didn’t sustain any serious damage, but more than 200 pounds of paint was burned off in the blaze.

Fire officials say it took about 600 gallons of water to put the fire out. In the end there was little damage to the car, but fire crews said the blaze melted away more than 200 pounds of paint.

?It just melted off years of spray paint and that kind of goes to show why these [cars] are so iconic and strong,? said Cadillac Ranch representative Bryan Brumley. ?Just like West Texas…fire, drought, wind, they just still stand.?

The roof of the car was already missing, but crews are expected at the ranch this week to weld any sharp pieces of metal and clean up the giant chunks of spray paint.

Despite the suspected vandalism workers at the ranch say visitors are still welcome to come out and spray paint the cars.

Read More: You May Soon Have to Pay Money to Drive This Crooked Street in San Francisco

Created by Stanley Marsh and The Ant Farm, the Cadillac Ranch features classic Caddys ranging in production dates 1949 to 1963. Since they are presented nose-down in the dirt, they are meant to show the evolution of tailfins, which was first introduced on the 1948 Cadillac, became most extreme in the late ’50s, and became more downward sloping in the early ’60s.

Cadillac Ranch is clearly a cool concept, and it’s a shame that someone would try to destroy such an iconic roadside attraction. Here’s hoping that whoever was responsible for this callous attempt to ruin everyone’s fun gets brought to justice — and soon.

Read More: This Program May Help Save Historic Route 66, One of the Most Iconic Highways in the United States, from Extinction