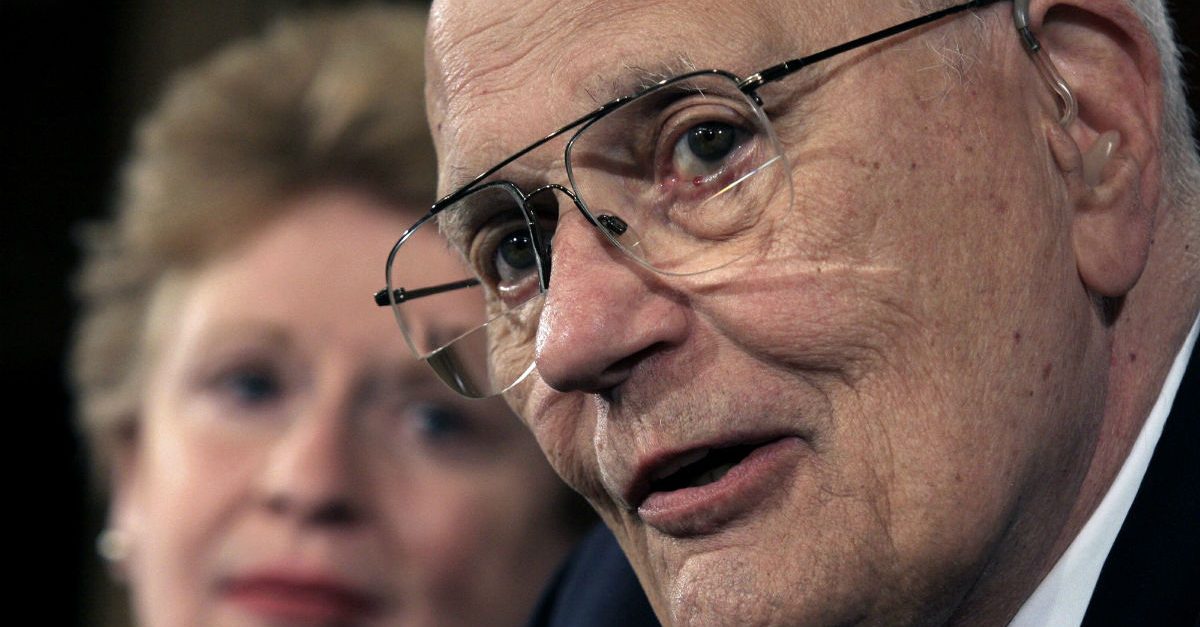 DETROIT (AP) ? Dubbed ?Big John? for his imposing 6-foot-3 frame and sometimes intimidating manner, former Rep. John Dingell bolstered that reputation with the head of a 500-pound wild boar that greeted visitors to his Washington office. The story behind it also helped: The Michigan Democrat is said to have felled the animal with a pistol as it charged him during a hunting trip in Soviet Georgia.

Yet the congressman ? whose nearly six decades in the U.S. House made him the longest serving member of Congress in American history ? was hard to typecast. An avid sportsman and hunter, he loved classical music and ballet. His first date with his wife, Debbie, whom he affectionately introduced as ?the lovely Deborah,? was a performance of the American Ballet Theater.

He also amassed more than 250,000 followers on Twitter, which became an outlet for the outspoken congressman?s wry takes and quick wit.

Dingell mastered legislative deal-making but was fiercely protective of the auto industry back home in Detroit, and he was a longtime supporter of universal health care. He also was a dogged pursuer of government waste and fraud, helping take down two top presidential aides while chairman of a powerful investigative panel.

The front page of Friday's @freep.

?He taught me how to shoot a rifle. I remember he said shooting a rifle is a lot like legislating,? former Ohio Rep. Dennis Eckhart told The Associated Press in 2009. ?You have to be very, very sure of your target, and then when you get your chance, don?t miss.?

Dingell, who died Thursday at age 92, served in the House with every president from Dwight D. Eisenhower to Barack Obama. Elected in 1955, following the sudden death of his congressman father, he had a front-row seat for the passage of landmark legislation including Medicare, the Endangered Species Act and the Clean Water Act, all of which he supported, as well as the Clean Air Act, which he was accused of stalling to help auto interests. His hometown, the Detroit suburb of Dearborn, was home to a Ford Motor Co. factory that was once the largest in the world.

My statement on the passing of former Congressman John Dingell: pic.twitter.com/gjBYHHImzB

Yet one of his proudest moments came in 2010, when he sat next to Obama as the historic $938 billion health care overhaul was signed into law. Taking up his father?s cause, Dingell had introduced a universal health care coverage bill during each of his terms.

For nearly 60 years, John Dingell represented the people of Michigan with honor, integrity & great good humor. There are few major legislative triumphs since 1955 that he didn’t have a key hand in passing. Hillary & I are grateful to have worked with him & called him our friend.

?He was a lion of the United States Congress and a loving son, father, husband, grandfather and friend,? her office said in a statement. ?He will be remembered for his decades of public service to the people of Southeast Michigan, his razor sharp wit and a lifetime of dedication to improving the lives of all who walk this earth.?

The announcement was quickly followed by an outpouring of tributes. Former President George W. Bush said he spoke with Dingell on Thursday and ?thanked him for his service to our country and for being an example to those who have followed him into the public arena. He was a fine gentleman who showed great respect for our country and her people.?

Former President George W. Bush on passing of fmr. Rep. John Dingell: "I was fortunate to speak to John Dingell this afternoon. I thanked him for his service to our country and for being an example to those who have followed him into the public arena" pic.twitter.com/i1IY2tOEeF

Clinton said Dingell?s ?respect for his constituents, his colleagues of both parties, and the institutions of Congress are a valuable reminder today of what a noble calling public service can be.? Former President Barack Obama echoed the sentiments, adding: ?John Dingell?s life reminds us that change does not always come with a flash, but instead with steady, determined effort.?

For 14 years he chaired the powerful House Energy and Commerce Committee, which oversees industries from banking and energy to health care and the environment. He also led its investigative arm, which produced several high-profile cases.

His investigations led to the resignation of former Stanford University President Donald Kennedy after the California school misused hundreds of millions of dollars in federal research funds, and the criminal conviction of one of President Ronald Reagan?s top advisers, Michael Deaver, for lying under oath. His investigations also led to the resignation of Reagan?s first environmental protection chief and U.S. Supreme Court Justice Neil Gorsuch?s mother, Anne Gorsuch Burford. She stepped down after being cited for contempt of Congress for refusing to share subpoenaed documents with a House subcommittee investigating a Superfund toxic waste program.

?I?ve gotten more death threats around here than I can remember,? Dingell told the AP in a 1995 interview. ?It used to bother my wife, but oversight was something we did uniquely well.?

His critics called him overpowering and intimidating, and his Washington office was decorated with big game trophies. And he often used his dry wit to amuse his friends and sting opponents. Even when hospitalized in 2003, following an operation to open a blocked artery, he maintained his humor. ?I?m happy to inform the Republican leadership that I fully intend to be present to vote against their harmful and shameless tax giveaway package,? he said from the hospital.

Born in Colorado Springs, Colorado, on July 8, 1926, John David Dingell Jr. grew up in Michigan, where his father was elected to Congress as a ?New Deal? Democrat in 1932. After a brief stint in the Army near the end of World War II, the younger Dingell earned his bachelor?s and law degrees from Georgetown University.

We join the Michigan community in mourning the loss of John Dingell. The longest-serving member of Congress, John was a lifelong, passionate #Tigers fan and we will miss his genuine enthusiasm for the ballclub. Our thoughts are with his family.

Following the sudden death of his father in September 1955, Dingell, then a 29-year-old attorney, won a special election to succeed him. But the newly elected politician was no stranger to the Capitol.

Alongside his congressman father, Dingell was serving as a page on the House floor when President Franklin D. Roosevelt asked Congress to declare war on Japan on Dec. 8, 1941. He supervised elevator operators while in college, and when he became the longest-serving U.S. House member in history in 2009, he recalled entering the chamber for the first time ? as a 6-year-old ? and being in awe of the East door.

?I had never been in a place like this. I was a working-class kid from a Polish neighborhood in Detroit, and this was quite an event for me,? Dingell told Time magazine at the time. ?I?ve only begun in later years to appreciate what it all meant.

Dingell won more than two dozen elections during his career, at first representing a Detroit district but eventually shifting because of redistricting to various southeastern Michigan communities. He became the longest-serving member of Congress on June 7, 2013, when he surpassed the former record holder, the late West Virginia Sen. Robert Byrd.

?The length of time is really quite unimportant,? Dingell told the AP in an interview in 2009. ?It?s what I have done with that time.?

John Dingell went from "Dean of House" to "Dean of Twitter." Some of his most memorable tweets: https://t.co/qJ2VRs76xW pic.twitter.com/VRIfExmcC6

Dingell, at age 87, announced in early 2014 that he would not run for a 30th full term because he could not have lived up to his own standards. Continuing the family tradition, his wife, Debbie, successfully ran for her husband?s seat in 2014.

?I don?t want people to be sorry for me. … I don?t want to be going out feet-first, and I don?t want to do less than an adequate job,? said Dingell, who by that time was using a cane or motorized cart to get around the Capitol.

Dingell suffered a heart attack four years later, in September 2018 at age 92. He was hospitalized but was soon ?cracking jokes as usual,? his wife said at the time.

John Dingell was the Dean of the House. He earned that title — not just because he was there the longest — but because he led with great moral courage and vision. He was a friend and I will miss him terribly. Debbie is in my prayers.

An autobiography, ?The Dean: The Best Seat in the House,? written with David Bender, was published in December. Forewords were written by former President George H.W. Bush, who had died only a few days before its publication, and former Vice President Joe Biden.

Dingell, in his later years, used Twitter as an outlet for his quick wit. In January, he noted the negative 7-degree temperature in Hell, Michigan, and retweeted a tweet from the Detroit Free Press that said the ?Detroit Lions are going to win the Super Bowl? now that Hell had frozen over.

Along with his wife, Dingell is survived by two daughters, two sons, one of whom served 15 years in the Michigan Legislature, and several grandchildren.