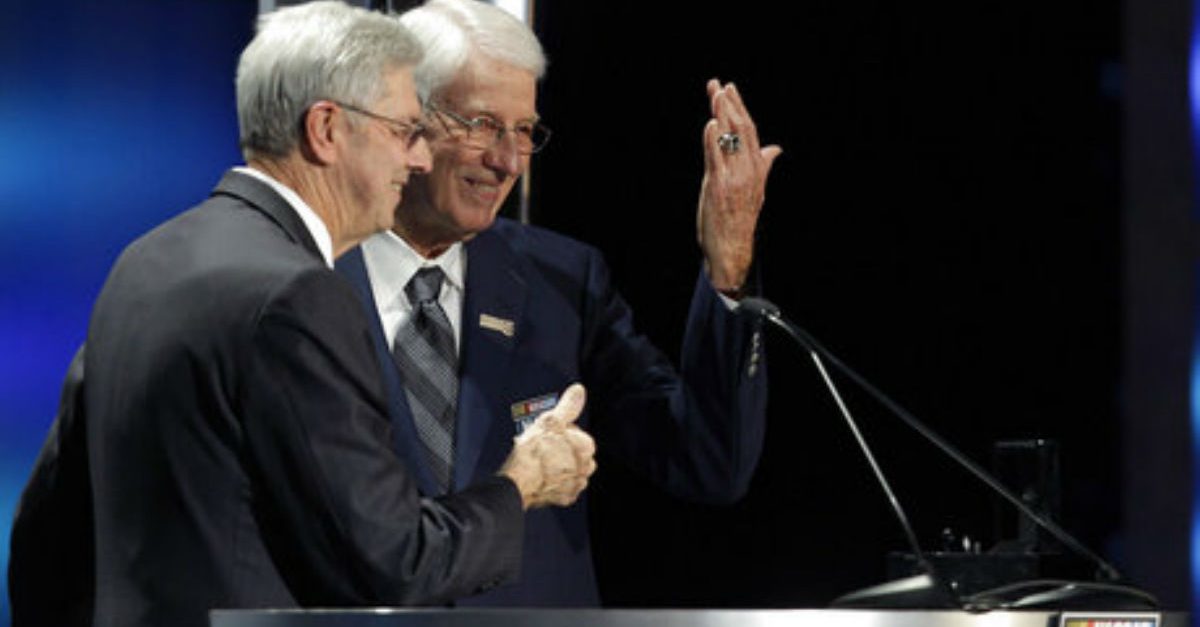 Glen Wood, the courtly and innovative patriarch of the famed Wood Brothers Racing team and oldest living member of the NASCAR Hall of Fame, died Friday. He was 93.

He died on Friday in Stuart, Virginia, after a long illness.

Wood Brothers announced the death of its team founder on social media. The team thanked “family, friends, friends, our small-town Virginia community of Patrick County, as well as everyone in the NASCAR community for their unwavering support.”

It’s with profound sadness that we mourn the passing of team founder and family patriarch Glen Wood this morning. We want to thank family, friends, our small-town Virginia community of Patrick County, as well as everyone in the NASCAR community for their unwavering support. pic.twitter.com/vadN1NKgTV

Wood, alongside younger brother Leonard, co-founded the Wood Brothers Racing team in 1953, and won four races over an 11-year racing career. Glen Wood in 1998 was named one of NASCAR’s 50 Greatest Drivers ? a list that included 20 drivers who had once raced a Wood Brothers car.

Wood is also a member of Virginia Sports Hall of Fame and in 2011 was elected to the NASCAR Hall of Fame.

Glen Wood sure lived a full life, a remarkable journey. His contributions to motorsports are tough to measure. My thoughts are with my dear friend, his brother Leonard and the rest of the family.

“This is a difficult day for all of us at Ford Motor Company,” said Edsel B. Ford II, a member of Ford’s board of directors. “The Wood Brothers race team, by any measure, has been one of the most successful racing operations in the history of NASCAR. Most importantly for our company, Glen and his family have remained loyal to Ford throughout their 69-year history.

“Glen was an innovator who, along with his family, changed the sport itself. But, more importantly, he was a true Southern gentleman who was quick with a smile and a handshake and he was a man of his word. I will cherish the memories of our chats in the NASCAR garage, at their race shop in Mooresville or the racing museum in Stuart.”

Sorry to hear about the passing of Glen Wood. One of the most respected men ever in our sport. The captain of the incredible Wood brothers legacy. Always a smile , a handshake and a word of wisdom Thank you for setting the standard of excellence in racing. RIP pic.twitter.com/sLXzRLzQZn

The Wood Brothers came from humble beginnings but built a race team ahead of its time that still competes at NASCAR’s top level. The Wood Brothers won 99 races in more than 1,500 starts in NASCAR’s elite division and they did it with an array of manufacturers and multiple star drivers. Wood was the primary driver when the team was launched and won four times.

The car number was eventually changed to No. 21, which is now one of the most iconic numbers in NASCAR. Among those who have driven for the team were David Pearson, Cale Yarborough, Curtis Turner and A.J. Foyt. Pearson waged most of his battles with rival Richard Petty while driving for the Wood Brothers.

Legend. Innovator. Loyal friend. We join the family and the sport in mourning the passing of @woodbrothers21 founder Glen Wood this morning. The Woods are the longest running Ford team in our history. More important, Glen was a true gentleman and a important part of our family. pic.twitter.com/10IlTFdNGN

Wood drove in the inaugural 1959 Daytona 500 and won the race five times as team owner. He attended every Speedweeks in Daytona since 1947 until his deteriorating health and fear of widespread flu kept him home for the first time last season.

“He made up his own mind, we didn’t ask him anything. We were just like, if he wants to go, he’ll say so, and he just made the decision himself that he just didn’t want to risk getting sick,” son Eddie Wood said last February.

Glen Wood always rode by car to Daytona Beach, driving a 1940 two-door Ford on his first trip in 1947. Wood took every ride through eight decades in a Ford.

Glen Wood was a legend and a great racer. More importantly he was a good man and respected by an entire community. His impact on the sport was huge and he helped pave the way for the sport to grow and be successful. My thoughts and prayers are with the Wood family.

“There are so many words that describe Glen Wood ? pioneer, legend, competitor, dedicated, committed, resilient, humble, authentic and many more,” said NASCAR Hall of Fame executive director Winston Kelley. “In addition to their on-track success, Wood Brothers Racing is recognized for revolutionizing the pit stops and dropping the time teams spent on pit road by as much as 50 percent. Wood Brothers Racing was recently recognized by the Guinness Book of World Records as the longest active NASCAR team, now at 69 years and counting.

“With all that success, perhaps what Glen will most be remembered for is his grace, humility and character. The word that best describes Glen to me is gentleman. I’ve often said if you looked up the term “Southern Gentleman” in the dictionary, you would see a picture of Glen Wood and likely all of the Wood Brothers.”

Very sad to hear about the passing of Glen Wood. Great memories of the Wood Brothers and everyone on that team. pic.twitter.com/U1JXePSqdz

Wood was nicknamed “The Woodchopper” because he first worked in a sawmill and, legend has it, he initially adorned “The Woodchopper” on cars he entered at Bowman Gray Stadium. Along with younger brother Leonard, the team used innovation to create new designs in the search for speed and reliability.

Wood was first hooked on racing when he made a trip to Daytona Beach, Florida, to watch cars on the beach-road course in 1947. His driving days ended in 1964, but he and brother Leonard carried on the team.

The Wood Brothers entered the Indianapolis 500 in 1965 as the pit crew for Jim Clark. Four Wood brothers ? Glen, Leonard, Delano and Ray Lee ? serviced Colin Chapman’s famed Lotus Powered-by-Ford driven by Clark, the most glamorous Formula One driver of the day.

Glen Wood, named one of @NASCAR’s 50 greatest drivers and a 2012 @NASCARHall inductee, has died.

Our thoughts are with @woodbrothers21 and the entire Wood family during this difficult time. pic.twitter.com/ix6kzLSkXf

Trevor Bayne won the Daytona 500 in 2011 driving for the Wood Brothers, the team’s first win in more than a decade. Roger Penske and Ford Motor Co. strengthened its alignment with the Wood Brothers in 2016 and Ryan Blaney won his first Cup race the next season. Blaney now drives in-house for Team Penske, but Penske-affiliated driver Paul Menard pilots the No. 21 for the Wood Brothers with personnel and technological support from the Penske organization.