Japan Is One Step Closer to Making “Flying Cars” a Reality 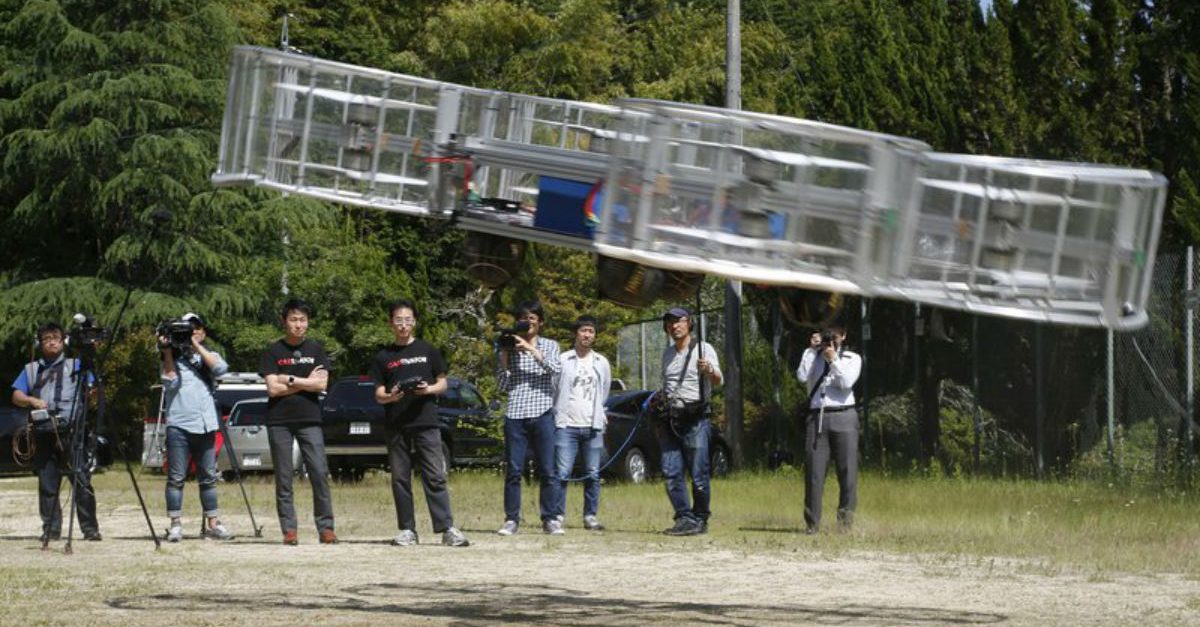 TOKYO (AP) ? Electric drones booked through smartphones pick people up from office rooftops, shortening travel time by hours, reducing the need for parking and clearing smog from the air.

This vision of the future is driving the Japanese government?s ?flying car? project. Major carrier All Nippon Airways, electronics company NEC Corp. and more than a dozen other companies and academic experts hope to have a road map ready by the year?s end.

?This is such a totally new sector Japan has a good chance for not falling behind,? said Fumiaki Ebihara, the government official in charge of the project.

Read More: This Sleek Nissan GT-R Was Donated to the Japanese Police Force

Nobody believes people are going to be zipping around in flying cars any time soon. Many hurdles remain, such as battery life, the need for regulations and, of course, safety concerns. But dozens of similar projects are popping up around the world.

A flying car is defined as an aircraft that?s electric, or hybrid electric, with driverless capabilities, that can land and takeoff vertically.

They are often called EVtol, which stands for ?electric vertical takeoff and landing? aircraft.

All the flying car concepts, which are like drones big enough to hold humans, promise to be better than helicopters, which are expensive to maintain, noisy to fly and require trained pilots, Ebihara and other proponents say.

?You may think of ?Back to the Future,? ?Gundam,? or ?Doraemon,?? Ebihara said, referring to vehicles of flight in a Hollywood film and in Japanese cartoons featuring robots. ?Up to now, it was just a dream, but with innovations in motors and batteries, it?s time for it to become real.?

Nissan Motor Co. and Honda Motor Co. said they had nothing to say about flying cars, but Toyota Motor Corp. recently invested $500 million in working with Uber on self-driving technology for the ride-hailing service. Toyota group companies have also invested 42.5 million yen ($375,000) in a Japanese startup, Cartivator, that is working on a flying car.

The hope is to fly up and light the torch at the 2020 Tokyo Olympics, but it?s unclear it will meet that goal: at a demonstration last year the device crashed after it rose to slightly higher than eye level. A video of a more recent demonstration suggests it?s now flying more stably, though it?s being tested indoors, unmanned and chained so it won?t fly away.

Will flying cars take off? Japan's government hopes so, though there are plenty of skeptics. Read more from @yurikageyama: https://t.co/fmHUTQ1pI3 pic.twitter.com/8dNy6i4cFk

There are plenty of skeptics.

Elon Musk, chief executive of electric car maker Tesla Inc., says even toy drones are noisy and blow a lot of air, which means anything that would be ?1,000 times heavier? isn?t practical.

?If you want a flying car, just put wheels on a helicopter,? he said in a recent interview with podcast host and comedian Joe Rogan on YouTube. ?Your neighbors are not going to be happy if you land a flying car in your backyard or on your rooftop.?

Though the Japanese government has resisted Uber?s efforts to offer ride-hailing services in Japan, limiting it to partnerships with taxi companies, it has eagerly embraced the U.S. company?s work on EVtol machines.

Uber says it is considering Tokyo as its first launch city for affordable flights via its UberAir service. It says Los Angeles and Dallas, Texas, and locations in Australia, Brazil, France and India are other possible locations.

Unlike regular airplanes, with their aerodynamic design and two wings, Uber?s ?Elevate? structures look like small jets with several propellers on top. The company says it plans flight demonstrations as soon as 2020 and a commercial service by 2023.

Uber?s vision calls for using heliports on rooftops, but new multi-floored construction similar to parking lots for cars will likely be needed to accommodate so many more EVtol aircraft, if the service takes off.

Unmanned drones are legal in Japan, the U.S. and other countries, but there are restrictions on where they can be flown and requirements for getting approval in advance. In Japan, drone flyers can be licensed if they take classes. There is no requirement like drivers licenses for cars.

Flying passengers over populated areas would take a quantum leap in technology, overhauling aviation regulations and air traffic safety controls, along with major efforts both to ensure safety and convince people it?s safe.

Uber said at a recent presentation in Tokyo that it envisions a route between the city?s two international airports, among others.

?This is not a rich person?s toy. This is a mass market solution,? said Adam Warmoth, product manager at Uber Elevate.

Concepts for flying cars vary greatly. Some resemble vehicles with several propellers on top while others look more like a boat with a seat over the propellers.

Ebihara, the flying-car chief at the Ministry of Economy, Trade and Industry, says Japan is on board for ?Blade Runner? style travel ? despite its plentiful, efficient and well developed public transportation.

Japan?s auto and electronics industries have the technology and ability to produce super-light materials that could give the nation an edge in the flying car business, he said.

Just as the automobile vanquished horse-drawn carriages, moving short-distance transport into the air could in theory bring a sea change in how people live, Ebihara said, pointing to the sky outside the ministry building to stress how empty it was compared to the streets below.

Flying also has the allure of a bird?s eye view, the stuff of drone videos increasingly used in filmmaking, tourism promotion and journalism.

Atsushi Taguchi, a ?drone grapher,? as specialists in drone video are called, expects test flights can be carried out even if flying cars won?t become a reality for years since the basic technology for stable flying already exists with recent advances in sensors, robotics and digital cameras.

A growing labor shortage in deliveries in Japan is adding to the pressures to realize such technology, though there are risks, said Taguchi, who teaches at the Tokyo film school Digital Hollywood.

The propellers on commercially sold drones today are dangerous, and some of his students have lost fingers with improper flying. The bigger propellers needed for vertical flight would increase the hazards and might need to be covered.

The devices might need parachutes to soften crash landings, or might have to explode into small bits to ensure pieces hitting the ground would be smaller.

?I think one of the biggest hurdles is safety,? said Taguchi. ?And anything that flies will by definition crash.?