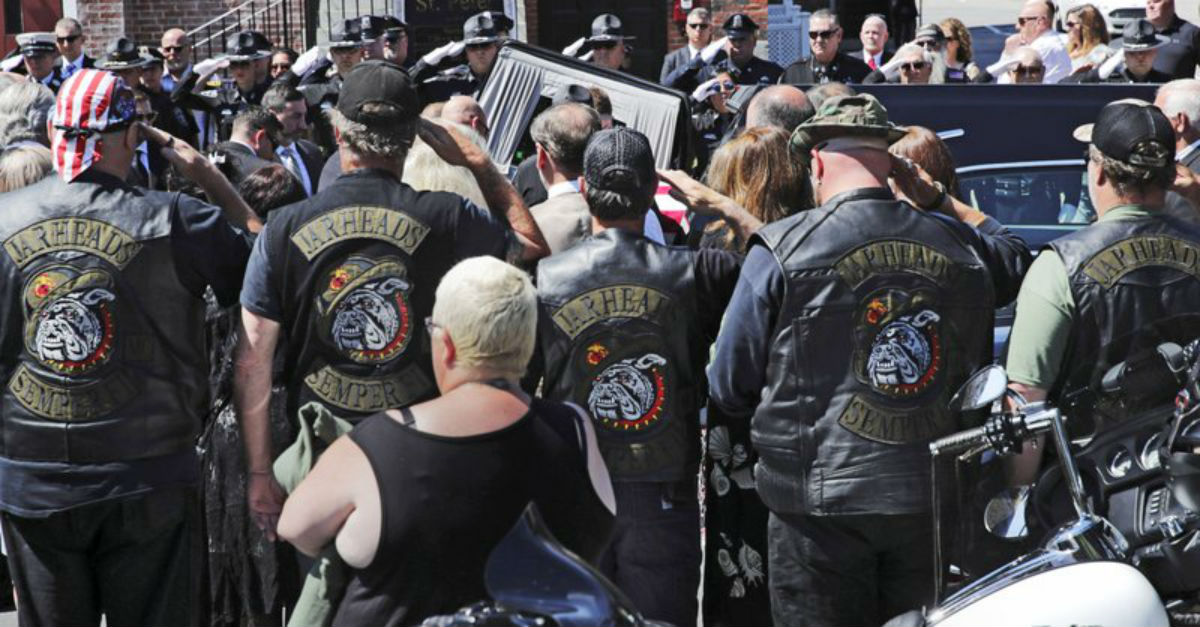 PLYMOUTH, Mass. (AP) — A motorcyclist who was among seven killed in a collision with a pickup trucklast week was a family man, proud Marine and dedicated public servant, mourners said Friday at a funeral that drew about 200 people, including leather-clad bikers and law enforcement officers.

The funeral for Michael Ferazzi, 62, of Contoocook, New Hampshire, was held at a church in Plymouth, Massachusetts. The rumbling of motorcycles echoed through town as dozens of bikes made their way to the service.

Many riders were fellow members of the Jarheads Motorcycle Club, with which Ferazzi and the other six killed were riding when they died. They hugged one another as Ferazzi’s flag-draped casket was carried into the church and offered a military salute alongside their bikes as the service ended with the Marine Corps hymn on bagpipes.

“Tough to lose your brothers, especially so many at one time,” said Jarheads member Paul Downey as he and his fellow bikers got on their motorcycles for the ride to the Massachusetts National Cemetery in Bourne.

“He had a lot more life in him,” said retired Lt. Col. Joe Murray. Ferazzi, a former Marine, was in his American Legion post, he said, and the two marched in parades together.

“He didn’t need to die when he was obviously enjoying the ride with his buddies,” Murray said. “But it’s good he died doing something he loved.”

Ferazzi’s oldest son, Matthew Ferazzi, remembered a father who loved motorcycles and spending time with his family. He recalled golfing with his dad, going to Boston Red Sox games and how he enjoyed holidays.

His dad, he said, loved doling out nicknames and was a fighter, even in the face of cancer that had returned in January.

“The thing that brings us all together is love, love for my Dad,” Ferazzi said.

A funeral also was held for Daniel Pereira, 58, of Riverside, Rhode Island. Visitation was held at a Laconia funeral home for Desma Oakes, 42, who died with her boyfriend in the crash.

They are among seven bikers killed last week when a pickup truck hauling a flatbed trailer crashed into the group in Randolph. The pickup driver, Volodymyr Zhukovskyy, 23, pleaded not guilty Tuesday to negligent homicide.

The Jarheads, a group of about 80 bikers and their supporters from across New England, served as a second family and a refuge for the members, many who left the service but still craved the brotherhood they discovered in the Marines.

With a logo that is anchored by the military branch’s bulldog, the group serves as a charity and social club. Many chapters are housed in American Legion and Veterans of Foreign Wars posts.

Manny Ribeiro, the Jarheads president, who survived the crash, described a family-oriented group whose members are doing their best to support the victims’ families. The group has received donations from Marines around the globe, and veterans are flying in from as far as the Netherlands for the funerals.

Ferazzi was a father of four who served as a Plymouth police officer for 34 years. He served in the Marines for four years, including a stint at in security at the U.S. Embassy in Tokyo. He also was a National Guard member and worked as a courthouse security officer.

Ferazzi grew up in Plymouth, and several childhood friends came to the funeral, recalling how they met in school and remained in touch for decades.

Their younger days were spent going to Aerosmith and Steve Miller Band concerts. As he got older, Ferazzi was always on a motorcycle and talked with pride about his time in the Marines. More recently, he was preparing for the arrival of a granddaughter.

“He was the nicest guy ever — a fun-loving, party guy,” said Cheryl Molloy, a nurse from Plymouth who grew up with Ferazzi. “He cared about everybody.”

Known as Danny Boy, Pereira joined the Marines after his 18th birthday and, according to his obituary, it was an experience that defined his life. A father of two, Pereira worked for the Narragansett Bay Commission.

Friends said Pereira, active in a gun club and an Italian club, was easygoing and would do anything to help someone in need especially fellow veterans. His funeral was held Friday in Providence, Rhode Island.

Oakes, of Concord, who lost her husband and young son in the past decade to lung cancer, was killed in the crash, along with her boyfriend Aaron Perry, 45, of Farmington, New Hampshire, according to the Concord Monitor.

Visitation was held Friday in Laconia for Oakes, followed by a celebration of life Saturday at the Hanover Inn in Hanover.