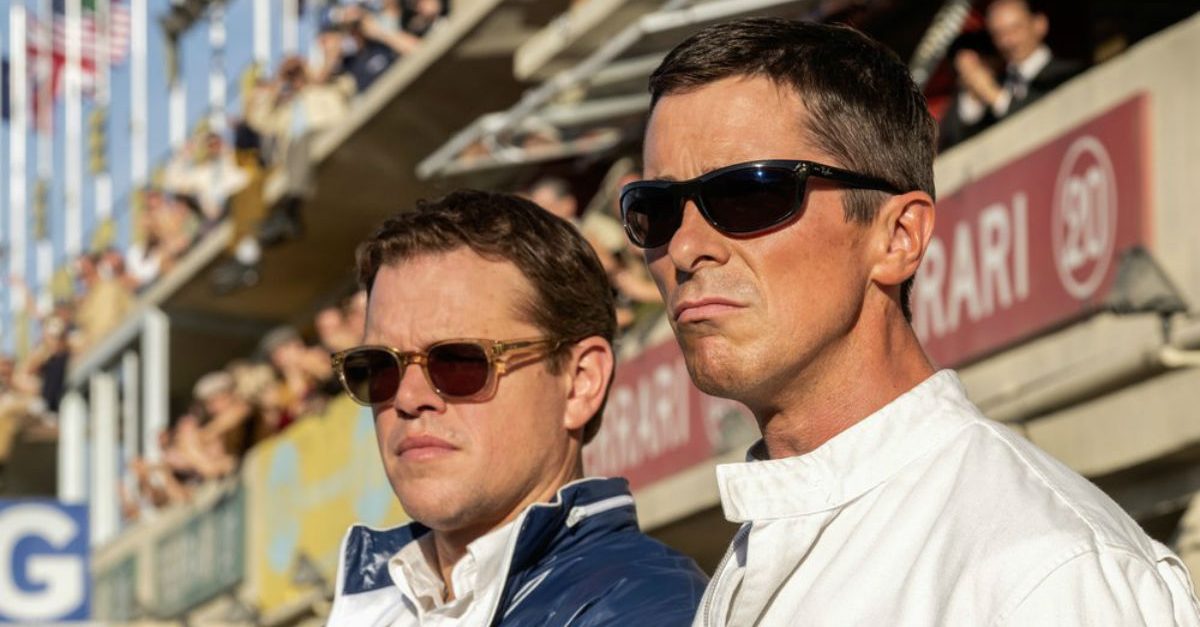 NEW YORK (AP) — France’s legendary Le Mans race, the central contest depicted in James Mangold’s “Ford v Ferrari,” runs more than 3,000 miles over the course of 24 hours. But that’s nothing compared to the distance Christian Bale had to cover coming off playing Dick Cheney in “Vice.”

“When I first signed up for it, Jim said, ‘This is great, we’ve got six months until we start. Christian weighs 240 pounds,’” recalls Matt Damon. “I was like, ‘He weighs what?’”

Bale, sitting next to his co-star, lights up. “He’s rolling down the track!” Bale says, laughing. “Without a car!”

In “Ford v Ferrari,” Damon plays visionary automotive designer Carroll Shelby and Bale plays maverick British racer Ken Miles. Shelby and Miles were brought together by the Ford Motor Co. to defeat perennial Le Mans champions Ferrari in 1966. They are both dedicated, driven personalities who chafe at the dictates of the overlords at Ford. “Ford v Ferrari,” a rare big-budget original film, is about high-speed mavericks shrugging off corporate control to accomplish something singular.

For its two movie stars, it’s a story not so unlike the battles of getting movies — movies like “Ford v Ferrari” — made in today’s Hollywood.

“The parallels to the movie business, they were pretty easy for all of us to see,” says Damon. “Shelby and Ken needed Ford. They weren’t going to get anywhere without Ford, and they knew it. And Ford needed them. That’s the movie business. There’s always that tension.”

“There should be,” adds Bale. “There has to be that tension in order to create something wonderful. There’s got to be love for something and there’s got to be a certain amount of hate for it as well. I think both sides understand, ‘Hey, we can’t do it without them. And they can’t do that without us.’”

“But if you get too pally, the films won’t be any good,” quips Bale, letting out a roar.

Bale and Damon were meeting for an interview earlier this fall at the Toronto International Film Festival shortly before “Ford v Ferrari” premiered there, quickly finding glowing reviews as a fine-tuned throwback thrill ride predicated on the swaggering, charismatic performances and easy chemistry of its two stars.

Damon, having flown in from France where he was in the middle of shooting Tom McCarthy’s “Stillwater,” had his own role-to-role transformation to make. Before posing for a photograph, a make-up artist worked to remove a shoulder tattoo Damon had acquired for the film. “Be gentle,” said Damon. “I’m an actor.”

“Ford v Ferrari” is their first film together even though Damon, 49, and Bale, 45, are roughly contemporaries.

“I think I’ve taken a lot of roles that Matt passed on,” says Bale. “I’ve worked thanks to Matt, just not with Matt.”

A significant part of the fun of “Ford v Ferrari,” which will open in theaters Nov. 15, is seeing their dynamic together. Shelby, a sunny, hat-wearing Texan and already a Le Mans champion, was the more famous of the two. He’s more adept at balancing their racing needs with those of their corporate overlords. Miles, with his chin upturned, is a proud, pugnacious perfectionist who can’t, for a second, suffer fools.

Mangold, the maker of muscular genre films like “Cop Land” and the Oscar-nominated “Logan,” had worked with Bale before on the 2007 western “3:10 to Yuma,” and he was convinced Bale was intended to be Miles.

“Jim had taken the script to Christian and I guess he was taking his time with it,” remembers Damon. “Jim finally called and he goes, ‘This is you! What is taking you so long?!’ And Christian’s like, ‘Do you think I’m a (expletive)?’ He goes, ‘No, not that part. The part about him being a perfectionist and a pure racer.’”

“Yes, he was a real purist and would happily, knowingly win the battle and lose the war at the same time,” says Bale, an actor renowned for the intensive immersion of his performances. “They’re both absolutely insane. “They just exhibit it in different ways.”

Bale and Damon are playing extensions of themselves, Mangold says.

“Matt’s been a movie star forever. Shelby was a star in racing forever,” said Mangold, speaking by phone from Los Angeles. “And Christian, one of the things I’ve always felt about him is he’s such a lovely, charming, loving person. So many of the characters he’s chosen to play along the way are incredible portrayals but are very, very dark. But there’s something extremely effervescent and playful and inspired about this character and it’s so much closer, to me, about who Christian really is.”

“Ford v Ferrari” cost nearly $100 million to make for 20th Century Fox. Following the studio’s acquisition, the movie will be released by the Walt Disney Co., and it will likely be the company’s top awards contender. While films sometimes split leads into separate categories, both Bale and Damon will be campaigned as best-actor candidates.

The actors, though, say they always thought “Ford v Ferrari” was, first and foremost, a crowd-pleaser, a “movie-movie.” Both already have an Oscar (best-supporting actor in “The Fighter” for Bale, best original screenplay for “Good Will Hunting” for Damon). But they identify with their characters in that they care more about results than trophies.

“I do think it’s different in that in what we do, any awards are a matter of opinion,” says Bale. “This is, straight up, who crossed the line first.”

Much of the dialogue around “Ford v Ferrari” — a limited model, indeed, in a movie landscape crowded by franchise films — is about what a rarity it is. Bale and Damon have heard that, too, but they had — like their characters would — different responses.

“I was trying to put together an RFK movie and running into a brick wall. It seemed like it should be an easier pitch,” says Damon, still nursing the wound. “It’s really hard to find a way to put these things together because the business is so different.”

“People kept saying that to me at the beginning, that they don’t make films like this anymore,” says Bale. “I was like, ’I don’t give a (expletive) about that. I want to know if it’s a good story and do I want to make it. I’m a little bit myopic with it. I don’t honestly see a hell of a lot of films. I just don’t have a great perspective on the state of the film industry. I don’t really know. I just know what’s right in front of me. And I feel very happy because they might not be giving us the money, but I’m still getting the bloody work.”

Read More: Actor Michael Fassbender Is Getting Serious About His Racing Career