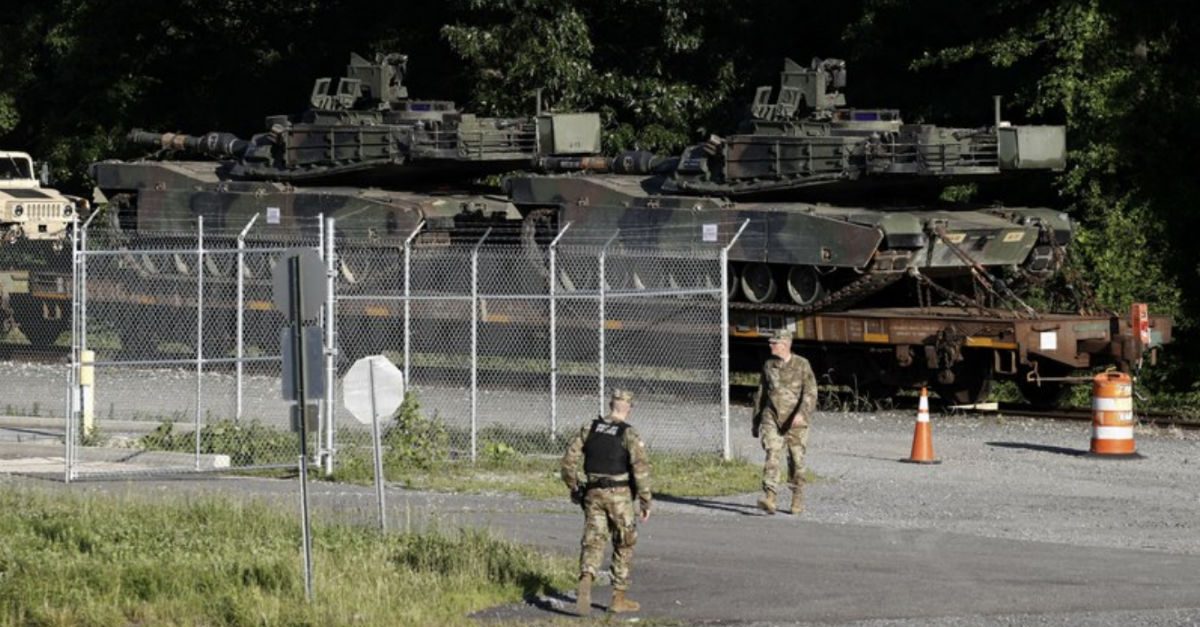 WASHINGTON (AP) ? President Donald Trump isn?t taking ?no tanks? for an answer on the Fourth of July.

He said Monday that a display of U.S. military tanks will be part of a special event he?s headlining July 4 in Washington, and an Associated Press photographer saw at least two M1A1 Abrams tanks and two Bradley Fighting Vehicles on flatcars in a railyard at the southeastern edge of Washington.

Military police were guarding the vehicles, which were visible to passers-by on nearby paths.

A U.S. official told the AP that the military vehicles to be used in the July 4 event were being stored at the railyard.

Trump had wanted a military parade of tanks and other equipment in the District of Columbia after he witnessed a similar parade on Bastille Day in Paris in 2017. That plan eventually was scuttled, partly because of cost, though Trump apparently held on to the idea.

Local officials also had objected because of the damage the heavy armored tanks could do to city streets.

?We?re going to have some tanks stationed outside,? Trump said Monday from the Oval Office, appearing to acknowledge local officials? earlier concerns.

He offered no specifics on where the vehicles would be located.

Read More: The Ripsaw Tank from ?Fate of the Furious? Is a U.S. Army Test Vehicle That You Need to See in Action

Sherman tanks were the tank most widely used by the U.S. during World War II, but they have been out of service for decades. The M1A1 Abrams tank is currently the main U.S. battle tank.

Two M1A1 Abrams tanks and two Bradley Fighting Vehicles will be on display as part of Trump?s ?Salute to America? event, according to a U.S. official who spoke on condition of anonymity because details of the exhibits have not been made public.

The Abrams tanks weigh more than 60 tons apiece and were been shipped on railroad freight cars, from Fort Stewart, Georgia, the nearest Army base that has them. The White House declined to release more specific information.

Trump recalled his visit earlier this year to a plant in Lima, Ohio, where M1A1 Abrams tanks are refurbished. The plant had been at risk for closure but remained online due to Trump?s investments in defense spending.

?We have some incredible equipment, military equipment on display ? brand new,? Trump said. ?And we?re very proud of it. You know we?re making a lot of new tanks right now. We?re building a lot of new tanks in Lima, Ohio ? our great tank factory that people wanted to close down until I got elected and I stopped it from being closed down, and now it?s a very productive facility.?

Thursday?s events are also expected to include a military demonstration by the U.S. Navy Blue Angels and other aircraft.

?We?re going to have a great Fourth of July in Washington, D.C. It?ll be like no other,? Trump said. ?It?ll be special and I hope a lot of people come. And it?s going to be about this country and it?s a salute to America.?

?I?m going to say a few words and we?re going to have planes going overhead, the best fighter jets in the world and other planes, too,? he said.

Trump plans to deliver a speech at the Lincoln Memorial during his ?Salute to America,? which has been added to the regular schedule of Independence Day events in the nation?s capital. The annual fireworks display will go off closer to the Lincoln Memorial instead of the Washington Monument, as has been the long-standing tradition.

The event is open to the public and free of charge, but a ticket-only area in front of the memorial is being set aside for VIPs, including members of Trump?s family, friends and members of the military, the White House said.

Last year, Trump and his wife, first lady Melania Trump, hosted service members and their families at a picnic on the White House lawn and the president addressed guests from the balcony. No similar event is being planned this year.

Federal lawmakers, local officials and others have voiced concerns that Trump could alter the tone of what traditionally is a nonpartisan celebration of America?s independence from the British by delivering a political speech. Trump formally announced his bid for re-election in June.

Interior Secretary David Bernhardt, who oversees the National Mall and has helped orchestrate the president?s vision, and other officials have said Trump?s remarks will be patriotic.

Read More: For $550, This Place Will Let You Drive a Tank over a Car. Oh, and Shoot a Bunch of Guns.