For $550 this place will let you drive a tank over a car. Oh, and shoot a bunch of guns. 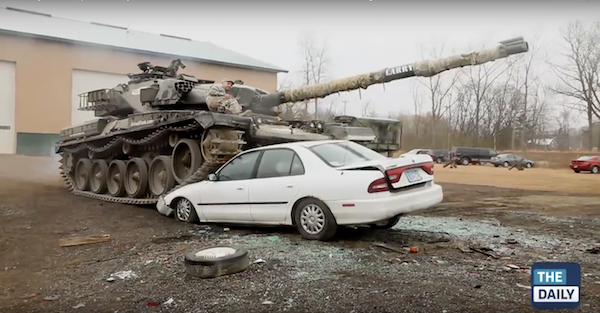 Tanks are the main focus of so many end of the world fantasies. Zombies just took over, you need a tank. Some crazy disease just killed off most of the world and you live on a secluded farm, you need a tank. War strikes between mankind and a barbaric Alien race, you get the idea.  For most of us driving a tank will always be a fantasy. We may play video games that have a tank or two but that?s about it, until now.

About three years ago, a man named Tony Borglum opened up, ?Drive-a-tank.? And just like the name suggests, you go there to drive tanks. Tony?s 20-acre site is located about 75 miles southwest of Minneapolis and he features 11 armored vehicles. The course he has setup gives his customer a real sense of what it would be like to drive a tank in a wooded, hilly area that tries to mimic a battle field. Accoring to fox.com one customer had this to say:

“It’s very noisy. Lot of vibration. Kind of warm but not uncomfortable. Took a little getting used to the maneuverability, but it’s just … a blast.”

His most basic package costs $399 and includes driving a tank and shooting a machine gun. You can opt to shoot different assault rifles as well, but that will cost extra. If all that isn?t enough and destruction is more your style, Tony has you covered. For an additional $549 you can pick out a junk car to run over, and for $3,500 you can even smash through a trailer house.

Tony says he got the idea to open his business from a trip to England where these types of places are more common. Borglum claims this is the first tank park in the U.S. and that he has sold over 600 packages this year alone.

If driving tanks, shooting guns and destroying stuff is your thing you can book a package here. Just make sure to wear a ton of cameo and bring a camera.