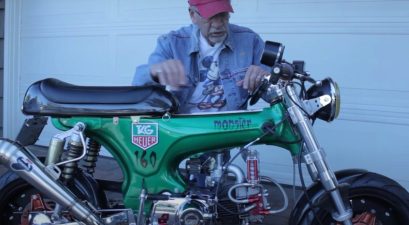 Ryan Reynolds has blessed Hollywood with countless great flicks over the last several decades, and it’s safe to say that the Deadpool star has accumulated a nice chunk of money in exchange for his cinematic contributions. So, what does a guy like him spend it on? Well, motorcycles, of course.

Turns out, Reynolds loves his bikes. Below, we’ll dive into a couple of the coolest rides that you’ll find in his collection.

5 of the Coolest Motorcycles in Ryan Reynolds’s Collection

When it comes to motorcycles, Reynolds is particularly drawn to café racers. That’s a huge reason why he ended up seeking out Dustin Kott with Kott Motorcycles to build this absolutely beautiful custom Triumph Thruxton.

Reynolds was not disappointed when he saw the final result. It’s a fairly new motorcycle, but it’s been decked out to resemble the classics in the most tasteful way possible. If there were only one bike that Reynolds could keep forever, it’d probably be this one.

The CB750 you’ll find in Ryan Reynolds’s garage is rather significant. It was the very first motorbike he purchased when he was only 15 years old. His love for two wheels developed thanks to this Honda model nicknamed “Superbike.” He was hooked since the first time he rode it.

Mike LaFountain of Raccia Motorcycles ended up building Reynolds a completely custom CB750, and it looks marvelous. It was fabricated completely from scratch, and features swept back metal work. LaFountain even took leather from one of Ryan?s screen-worn jackets and used it to make the seat.

The Triumph 650 is a classic that any biker could enjoy. That said, Reynolds’s 650 is far from how it came from the factory. It’s chromed out and simplified, just how the avid motorcyclist likes it.

Factory Metal Works did all the custom motorcycle building, and they clearly know what they’re doing over there. The bike was nicknamed “Nine O?Clock Gun” in honor of the naval cannon that gets fired every night in Reynolds’s hometown of Vancouver, Canada.

There seems to be a very specific style that Reynolds is drawn towards. His Ducati Paul Smart limited edition motorcycle fits that mold almost perfectly, and he’s been spotted riding it around Los Angeles on more than one occasion.

His pictures on the saddle typically end up trending, and for good reason. It’s a great-looking bike, and it’s rumored that Reynolds owns a number of other Ducatis, including a GT1000 and a SC1000.

Marking the third Triumph motorcycle in his collection, the Bonneville comes in last of our roundup, but certainly not least. It’s another timeless classic, perfectly suiting Reynolds’s style. He compares riding to meditation, and this particular model has given him that relaxation he desires.

In fact, he loves this bike so much that he’s taken it on cross country trips on at least three different occasions. Reynolds has put tons of time and money into this bike, so I’d expect it to hang around for quite some time.