The 2019 Acura NSX: An American-Made Supercar Made for Everyday Driving 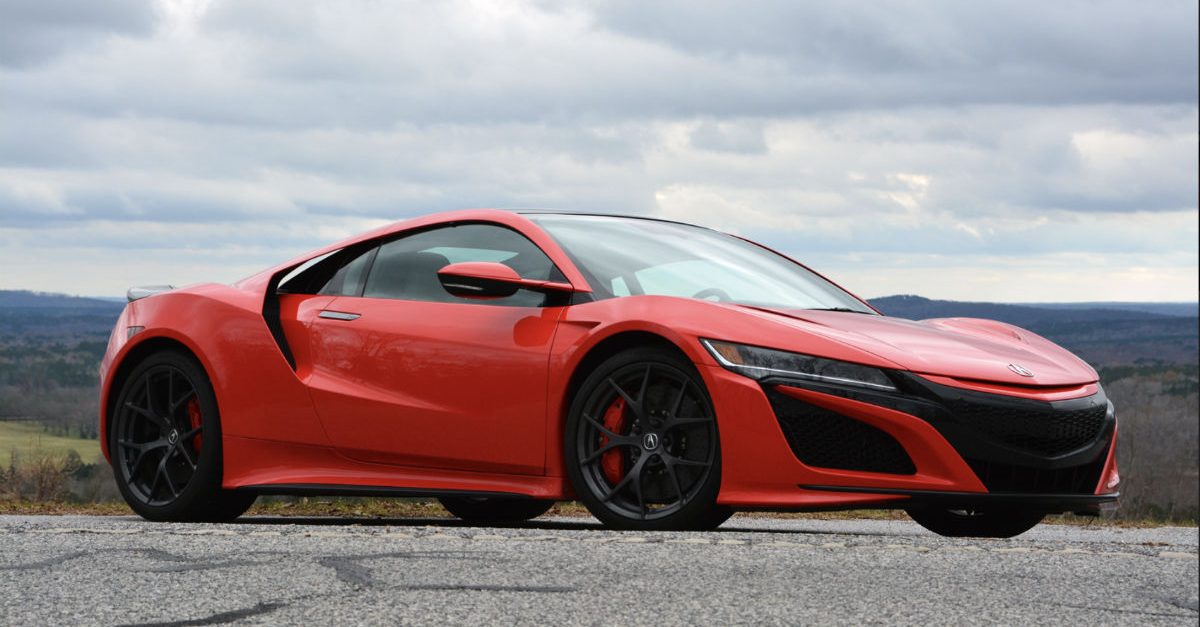 When most people daydream about supercars, they probably think of days spent enjoying track events or carving through scenic California roads. My recent seat time in the updated 2019 Acura NSX couldn’t have been any different. Despite living minutes from wonderful roads around Pine Mountain, Georgia, my long weekend with Acura’s hybrid supercar started with weather that was frigidly cold and unseasonably rainy.

Sure, I eventually got an afternoon of somewhat dry roads, but not only did the dark, gloomy conditions provide a perfect juxtaposed backdrop for the bright red hybrid supercar as it pulled into my driveway, it also revealed this car’s hidden talent as an incredibly entertaining daily driver. I got to drive an original NSX (for a brief afternoon years ago), and the everyday capabilities was one of the key attractions to that car as well. It’s nice to see that this intangible trait carried over to the second-gen NSX.

With an ever-growing number of rivals that include the Porsche 911, Audi R8, McLaren 570S, and even the upcoming mid-engine Corvette, the overall ease of driving is what really sets the NSX apart. It’s the ultimate example of a plug-and-play supercar, allowing anyone anywhere to just get in, drive, and enjoy. After making enthusiasts wait 12 years for the second-gen NSX, Acura wasted no time updating its hybrid-powered, all-wheel-drive supercar resulting in the quicker and more nimble 2019 Acura NSX.

Supercars don’t just have to be fast, they have to be sexy as hell, too. The 2019 Acura NSX definitely fits the bill! The mid-engine layout gives the NSX typical supercar proportions with a short nose and even shorter overhangs, but it’s the overall design of this car that makes it stand out. The second-gen NSX debuted for the 2017 model year with a shape inspired by the 2007 Acura Advanced Sports Car Concept and later the 2012 Acura NSX Concept. Every line, crease, intake, and vent on this body is certainly meant to serve some performance or aerodynamic-related purpose, and each also helps to give the NSX its exotic supercar appearance. Even the door handles have an exotic flare to them as they pop out automatically when the doors are unlocked (similar to the handles used by Aston Martin and the Jaguar F-Type).

Other than a new color option ? Thermal Orange ? the only way to spot a 2019 Acura NSX from previous second-gen NSX models is the grille with body-colored trim above the grille instead of the previous chrome strip. The new Acura NSX is an attention-grabber in just about any color, and it wears red ? Curva Red in this case ? as good as any Ferrari, Porsche, or Corvette. This bright-red hue looked even better with the $3,000 optional carbon fiber rear spoiler and optional red calipers, which were a perfect match to the exterior color and perfectly contrasted the forged aluminum Y-spoke wheels.

Framed beautifully under the glass hatch is a mid-mounted 3.5-liter twin-turbo V-6 engine that combines the benefits of both direct and port injection. This engine is paired to a nine-speed dual-clutch transmission and Acura’s Sport Hybrid SH-AWD system that uses a trio of electric motors (an electric motor at each front wheel and a third sandwiched between the engine and transmission sending power to the rear wheels). The 2019 Acura NSX might be a hybrid, but this is no fuel-sipping green car. Total system output is rated at 573 horsepower and 476 lb-ft of torque, helping rocket the NSX from 0-60 in around three seconds before hitting a top speed of 191 MPH.

Yes, accelerating in a car that fast is as exhilarating as you might think, but the coolest part of driving the new NSX was on otherwise unexciting trips…especially when it came to picking up my daughter from her elementary school. Around town, you really don’t have to worry about the nose scraping over speed bumps or up typical driveway inclines like most sports cars, and there are four drive modes (Quiet, Sport, Sport+, and Track) that really help transform the personality of the NSX using the steering, brakes, throttle, Vehicle Stability Assist, dampers, and Sport Hybrid SH-AWD control system. With the cold and wet weather, I didn’t want to push my luck with Track mode, but the other modes showed the NSX’s versatility. Like its name suggests, Quiet mode smoothes out the ride, closes the active exhaust valves to reduce exhaust noise, and maximizes EV driving range (short distances at speeds up to 50 MPH). Select any of the other drive modes, though, and the 2019 Acura NSX gets tighter and more raucous, including an exhaust system that belts out some glorious noises! Official EPA fuel economy estimates are 21 mpg city and 22 mpg highway ? 5 mpg better in the city than the original NSX ? and after my long weekend in the NSX, the trip computer showed almost 19 miles per gallon in a variety of driving conditions while switching between the various modes.

The biggest changes Acura made for the 2019 model year were to the NSX’s chassis and driving dynamics courtesy of stiffer stabilizer bars (26 percent stiffer in the front and 19 percent stiffer in the rear), revised software tuning, and new tires ? Continental SportContact 6 (245/35R19 front and 305/30R20 rear), although stickier Pirelli Trofeo R tires are still available as a $1,500 option. According to Acura, all of these improvements help give the 2019 NSX improved performance and handling with the ability to lap Honda’s Suzuka, Japan proving grounds a full two seconds faster than the 2017-18 NSX. This tester was equipped with a $10,600 option package that added carbon ceramic two-piece rotors with red calipers (six piston up front and four piston at the rear). Having never driven a 2017-18 NSX, I can’t say firsthand how much this car has changed, but I do know that this car is a blast to drive around town or along twisty back roads and the handling is superb for a low-slung, 3,878-pound hybrid supercar.

The 2019 Acura NSX comes loaded with all the tech goodies you’d expect from a six-figure supercar (or any modern luxury car, for that matter). Standard equipment includes navigation, a 580-watt nine-speaker ELS Studio audio system, and Apple CarPlay and Android Auto compatibility, which are all controlled using the seven-inch capacitive touch screen. The highlight of the cabin tech, though, is the eight-inch TFT display for the gauge cluster that displays a wide variety of information and changes its appearance automatically with each drive mode. In terms of safety, the NSX is packed with seven airbags and a rear-view camera that offers three different views for optimal parking maneuvers.

As exotic as the exterior is, the interior of the 2019 Acura NSX doesn’t look or feel too different from any other Acura. That might be a downside to some buyers out there, but this makes the NSX even more enjoyable when driven around town. The sport seats are wrapped in a mix of semi-analine leather and Alcantara, and the entire cabin is covered in rich leather and accented with brushed metallic trim. The seats are perfectly contoured for normal driving, yet equally supportive to keep you in place in tight-cornering maneuvers, and the oblong-shaped steering wheel maximizes comfort and visibility while adding a racecar-like appearance. There’s plenty of headroom with decent-sized door openings, making it far easier to get into than the similarly sized and priced BMW i8. The overall comfort and passenger space are surprisingly practical, but the small cargo capacity (4.4 cubic feet behind the engine) might be the only limiting factor when it comes to taking the NSX on a road trip.

Like the original, the 2019 Acura NSX is still an exotic supercar designed to deliver peak performance…anytime, anywhere. Mission accomplished! With a base price of $157,500, the updated NSX has a price that easily reflects its overall performance, luxury, and advanced technology, and this particular tester (VIN #002) added the carbon fiber spoiler, carbon ceramic brakes, and SiriusXM Satellite Radio for an as-tested price of $171,600.

While such a high-powered exotic car was obviously developed with speed and handling in mind, the NSX also showcases the everyday driveability similar to the Corvette or 911. And, better yet, it’s handmade in America ? Marysville, Ohio to be exact ? making it the first true American-made supercar since the Dodge Viper was killed off.