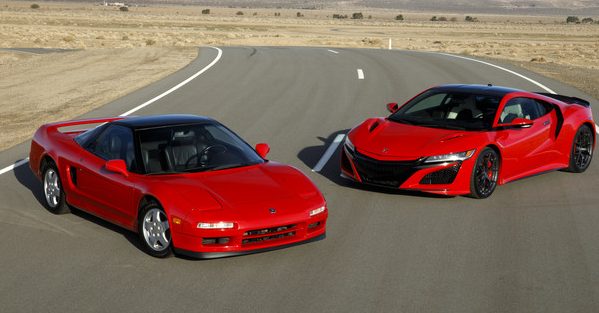 The Acura NSX (with NSX being an acronym for “New Sports eXperimental”) was celebrated at this month’s Chicago Auto Show. The first generation model that came out back in 1989 was Acura’s first attempt to build a high-performance sports car to compete with the likes of Ferrari and other European stalwarts, and it was the first car of its kind to include a VTEC engine and an all-aluminum monocoque chassis.

Watch Acura’s commemoration with the retro-style promo below.

“Before NSX, it was always assumed that supercar performance came at the price of a comfortable interior and everyday drivability,” said Jon Ikeda, vice president of Acura. “NSX shattered those notions, and raised the bar on every other exotic and supercar maker, with the effects still felt today. NSX was a huge inspiration and one of the major reasons I was drawn to join Acura nearly 30 years ago.”

One turning point in the Acura NSX’s history was when famed Formula 1 race driver Ayrton Senna, who test drove it at Honda’s Suzuka Circuit, called it a “little fragile.” As a result, Acura rebuilt its chassis with 50 percent greater stiffness, and the NSX returned to run laps on the famed German Nurburgring circuit. Another key influencer was ex-Honda president Tadashi Kume, who lamented the lack of a VTEC V6 on its initial prototype to produce a throatier roar. Several months later, it was introduced to much fanfare.

Regrettably, the Acura NSX has lagged in sales over the past year, dropping to 170 units sold from 581 in 2017, tanking since its 2016 launch. The 2019 NSX continues to shine from a power perspective, sporting a a 3.5-liter V6 engine that delivers 573 horsepower and 476 lb-ft of torque for a three-second 0-60 MPH time. Obviously, this marks a significant top-speed improvement when compared to the original NSX.