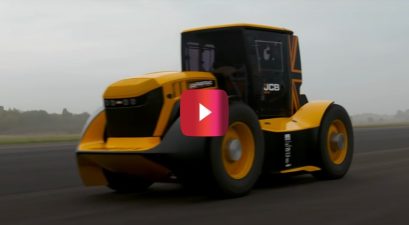 Turbocharged Tractor Hits 135 MPH and Beats Its Own World Record

It’s not often that you see record-breaking stunts done for a good cause, but back in 2016, Saudi Arabia’s Al Jazirah Vehicles Agencies and Al Jazirah Ford Racing drifted into the record books during part of a campaign to raise awareness about breast cancer.

Completely the stunt outside a car storage center in Riyadh, Saudi Arabia, the drivers drifted a 9,515 square-foot breast cancer awareness ribbon in pink smoke. It took around 45 minutes for Al-Qahtani and Al-Essa to complete the image.

“The first message the event wanted to promote was to raise awareness of the breast cancer disease,” Sheikh Abdullah bin Fahad Al-Kraidees, President of Al Jazirah Vehicles Agencies, said in a statement. “We need to do more as a society to promote breast cancer awareness throughout the year with creative ideas that connect with key audiences in our society. We have to talk more about topics which impact people’s health, and push the importance within our communities about the need for early screening which improves the chances of recovery from breast cancer.”

“Drifting is one of the most popular sports in Saudi Arabia, and as AJVA we are committed to providing a safe and secure environment for people to enjoy and appreciate different types of driving. I’d like to congratulate Al Jazirah Ford Racing Team for their remarkable achievement.”

What an awesome stunt for an amazing cause!