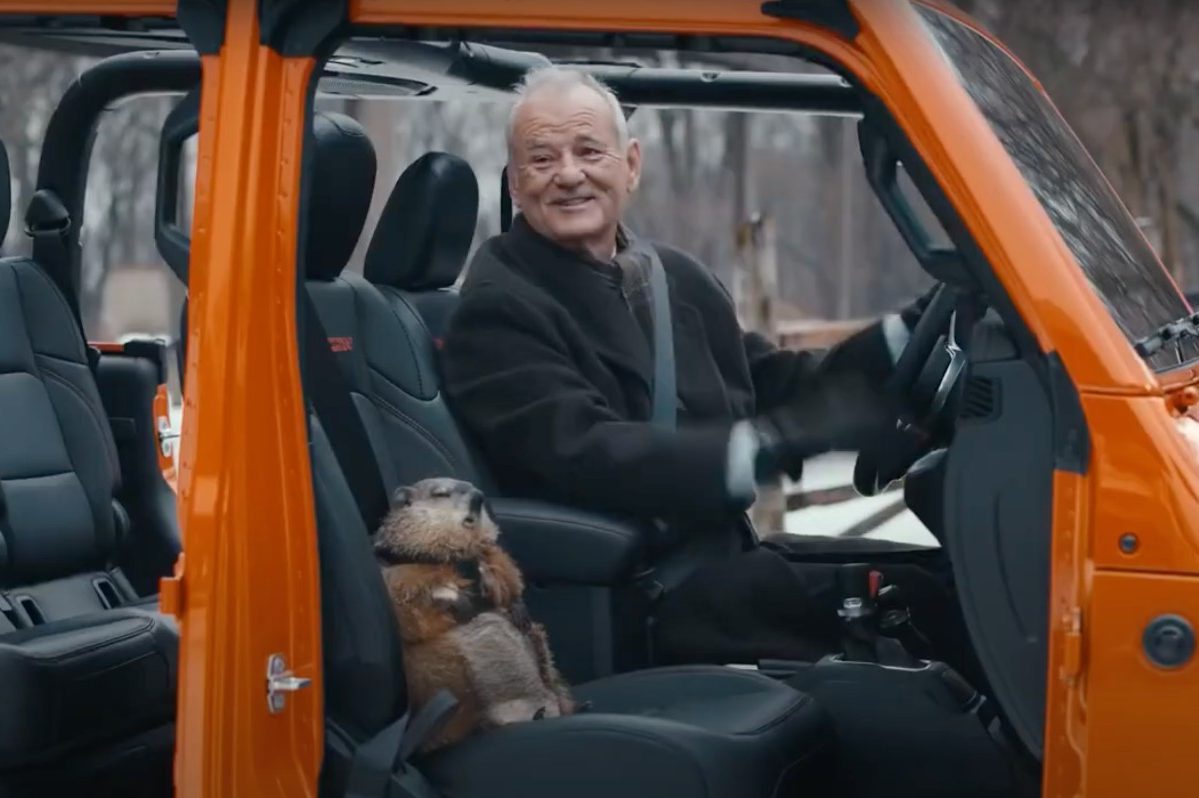 It was Groundhog Day all over again, as Bill Murray returned to a famous role for Jeep’s wildly popular Super Bowl LIV commercial. Promoting the 2020 Jeep Gladiator pickup, the homage to the 1993 comedy film “Groundhog Day” ended up being the big game’s highest-rated ad. Not too shabby, considering the minute-long spot marked Murray’s first-ever national television commercial.

For the ad, Murray reprises his role as Phil Connors, a Pittsburgh weatherman who finds himself stuck in a time loop where he relives the same day over and over again. The 2020 version of “Groundhog Day” goes just a little bit differently than the ’93 version, though, with Murray kidnapping Punxsutawney Phil and going for a ride in the new Jeep Gladiator. While Sonny and Cher’s “I Got You Babe” plays in the background, Murray’s Connors reunites with two iconic characters from the film: Ned Ryerson, played by Stephen Tobolowsky, and Buster Green, played by Murray’s brother, Brian Doyle-Murray.

While Jeep’s ?Groundhog Day? earned a 7.01 rating, Hyundai’s ?Smaht Pahk? ad was close behind with a 6.98. Google?s ?Loretta,? which was based off the 85-year-old grandfather of a Google employee, earned a 6.77.

Read More: What Does a Joe Biden Presidency Mean for Automakers?

How Jeep Got Bill Murray for Its Super Bowl Commercial

As you can probably imagine, Bill Murray’s not an easy guy to reach. So, Olivier Francois, the chief marketing officer for Fiat Chrysler Automobiles, had his work cut out for him to nab Murray for the Super Bowl 2020 spot.

Fortunately, Murray and Francois have some mutual friends, and while he had to wait a number of weeks, Francois was eventually able to sit down with Murray and pitch the Groundhog Day Super Bowl ad to him. The rest is history.

“This is my first commercial. I’m glad I did it with (the Jeep brand),” said Murray, according to an FCA press release. “And I’m glad that this is my last commercial, as well.”

Will this actually be the former Saturday Night Live‘s star last commercial? Unless he finds himself stuck in some sort of real-life Groundhog Day situation, where he has to reshoot the same ad over and over again, we’re gonna go ahead and take him at his word.