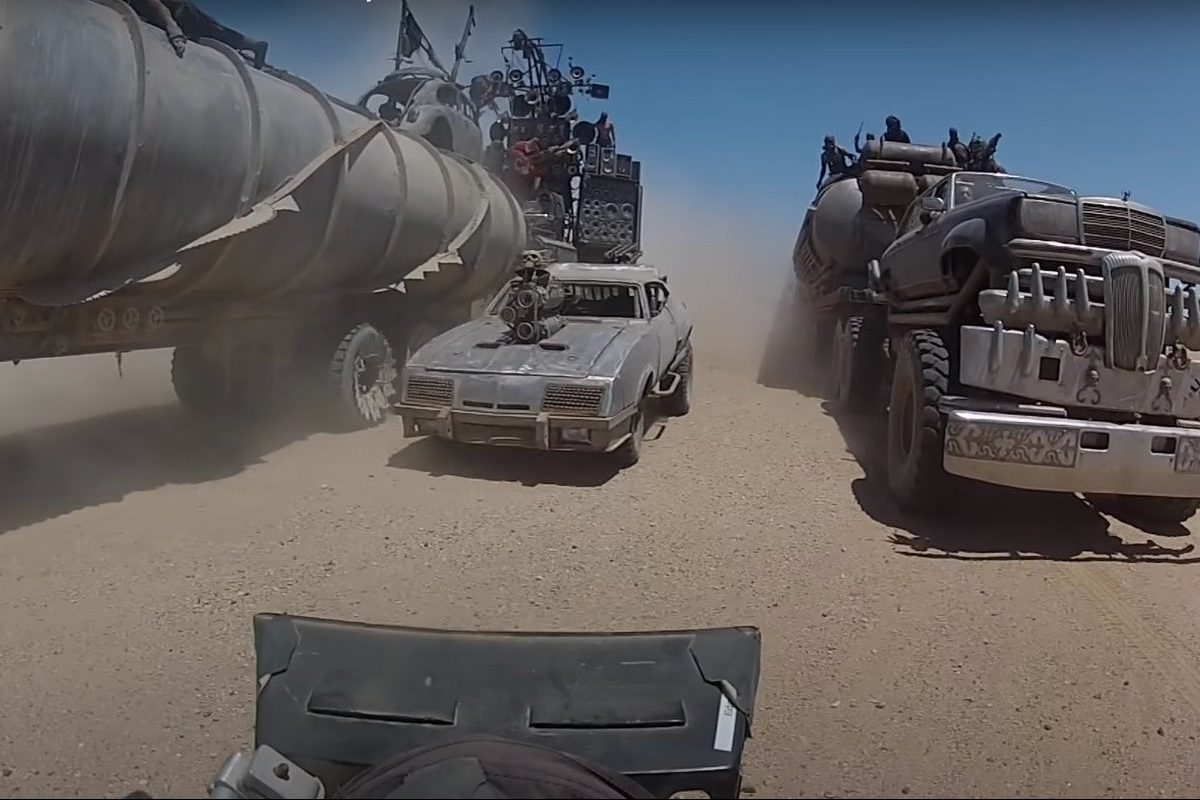 There’s no question that Mad Max: Fury Road brought some serious car chase action to the big screen. From brilliant director George Miller, the movie had a star-studded cast, which included Tom Hardy and Charlize Theron.

While the acting was good, the true stars of the film are the unique weaponized and armored vehicles used throughout. Without them, the action would not have been nearly as intense, and we can thank the production designer Colin Gibson for making it happen. That’s why we’re going to check out some of coolest off-road vehicles from the movie in a little more detail.

In a nod to the previous Mad Max films, Max continues to drive his 1974 Ford Falcon XB Coupe in Fury Road. This thing is decked out with all kinds of goodies, including a powerful V8 engine, four-wheel drive, matte silver paint job, and of course, tons of weapons for battle. When it comes to driving around in a post-apocalyptic wasteland, this vehicle is pretty versatile. You’ve got weapons when you need them and the speed to evade any situation.

Rictus Erectus may not be the brightest character, but he drives one hell of a monster truck. Bigfoot is a 1940s truck equipped with 66 inch tires and heavy duty axles from a military truck. From top to bottom, this thing has four feet of suspension, and it’s capable of running over just about anything. To power this beast, it’s got a big V8 with a supercharger. As if that wasn’t enough, it also features a belt-driven machine gun that’s harpoon mounted to the roof.

This one is definitely unique. This creation was constructed by combining a 1970s Valiant chassis to a US Ripsaw Tank, which is ironically named “The Peacemaker.” With its tank tracks and supercharged V8 engine, you can go just about anywhere and cause some destruction in the process. To make it even more intimidating, it’s got a mouth on the front that’s made out of bullets and lots of space for ammo in the back. Oh yeah, and there’s a machine gun on the top.

Read More: Dale Jr. Has Some Cool Chevys in His Collection, Including Australia-Made Holden Commodore

It may not be what you’d think a war vehicle should look like, but this slick silver-stretched Mercedes Limo can do some damage. It sits on a M814 military cargo truck chassis and sports a variety of different car grilles on the exterior to show its previous prey. The windows are lattice-cut, the steering wheel is made with woven strands of hair, and the gearbox lever is a revolver.

The People Eater hauls around huge fuel tanks for other bad guys that need to fuel up. He usually travels around with the “fire cars” and a Volkswagen beetle. The car does fit the character quite well, however.

Ah, the Doof Wagon. The perfect way to rally the troops. Warner Bros called it a ?sonic carmageddon.? This gigantic machine is essentially a mobile stage, with tons of stacked speakers, subwoofers, and drums. As the Doof Warrior shreds his guitar, flames are thrown from the neck. The music blasting from this truck only makes the fighting action so much more intense. Don’t worry, it’s also got plenty of get up with a supercharged V8.

One of the most famous and craziest looking vehicles of the whole film has got to be the Gigahorse. It’s made from combining two different 1959 Cadillac Coupe De Villes. The double body sits on 6.5-foot dual tires and two supercharged V8 engines aggressively hanging out of the hood. Underneath, it has a custom gearbox to support the power. It’s also got a flamethrower and harpoon mounted on the back, so it’s ready for destruction.

Nux has a ride that any of the hot rod and muscle car guys would love. The car is a 1934 Chevy 5-window coupe, basically a rat rod on steroids. In the engine bay, you can see a V8 engine, with two turbochargers feeding into a supercharger. Match that with the aggressive tires, swooping exhaust pipes, and silver paint job, and this is one bad vehicle. Perfect for the young character that drives it.

Made from old International Utes and an Ford F-250 tow truck, the claw cars are equipped with tons of harpoons, big rakes, anchors, and just as many hydraulic ploughs. The ploughboy is an EH wagon with an off-road frame, and these vehicles mean business. You wouldn’t want to get caught up with this truck.

The War Rig is the most suitable name for this beast. It’s the result of a Czechoslovakian Tatra and a Chevy Fleetmaster, fusing together onto a six-wheel drive platform powered by twin V8 engines. It hauls around a massive fuel tank, and it’s got lots of extra space to fit supplies and plenty of war boys. It’s an impressive rig, and Charlize Theron drives the absolute hell out of it.

The best offense is a good defense. The Buzzard Excavator is very good at causing damage, and it’s not hard to see why, when you look at the massive spikes mounted all over it. Oddly enough, it has exactly 1,757 spikes, the same amount as a Australian anteater. It was originally a M.A.N. 6×6 tractor, but it had a couple modifications done to it, making it a pure death machine.