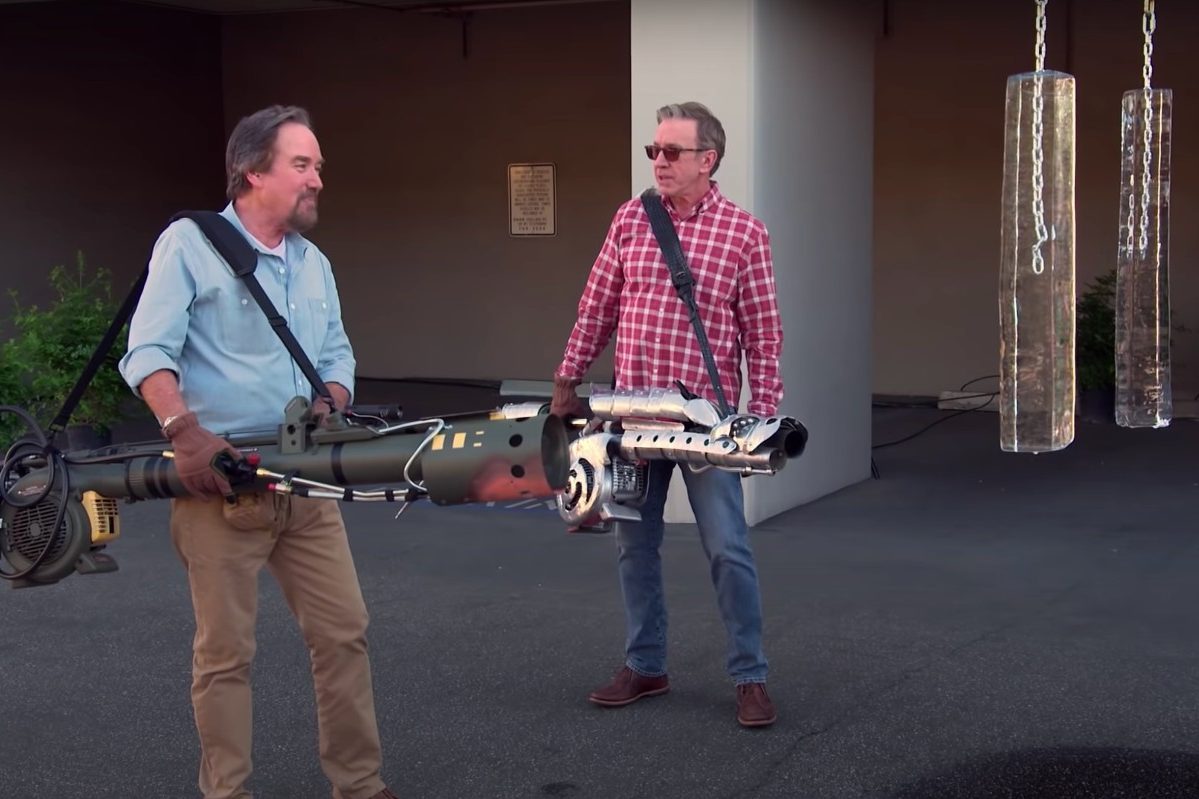 Maintaining your property can be a pain. Ever wished your leaf blower had a little more oomph to it? On an episode of Assembly Required, Tim Allen finds the solution. He declares the conventional leaf blower “better than sliced bread.” This new and improved take on this staple in property maintenance will spice up your yard work. There is one caveat: Users will need a fire extinguisher.

This innovative custom-made tool makes the conventional leaf blower a multi-seasonal device rather than a machine reserved for autumn. This episode’s challenge was to create an all-season leaf blower and ice melter, and the contestants more than delivered. Contestants were given five days for their build. Tim Allen and Richard Karn would assess the functionality, design, and quality after the craftsmen completed their builds.

If built properly, these tools would make ice removal a much less grueling task. Snow and ice make life for homeowners incredibly difficult, since they are there to stay until the weather turns or someone intervenes. Alex and Sean’s fire-breathing leaf blowers could potentially create a new tool to use in the battle against the elements. Would they revolutionize property maintenance or fall short because they could not stand the heat?

Breaking Down the Builds

Risking complaints from neighbors, the contestants diligently tested their builds’ torch components and planned their insane creations. The craftsmen drew inspiration from WWII fighter planes and dragons. The results were tools that looked more like Fortnite weapons than leaf blowers. The contestants aimed to make their builds both stylish and practical. Alex’s fighter plane build featured a digital barometer, a flashlight, and an accessory pouch to hold a fire starter. Sean’s hand-hammered lightweight steel dragon blower build was intimidatingly stylish. It even housed a fire extinguisher. The real question was, could it breathe fire?

The Assembly Required hosts were ready to put the machines to the test. Tim and Richard were unimpressed by both builds’ blowing capabilities, since both craftsmen chose not to enhance the strength of the leaf blowers. The flamethrower components, on the other hand, were almost too hot to handle. The next challenge would see which build would melt through a hanging chunk of ice first.

Contestant Alex’s P-51 Mustang-themed blower could not hold a candle to his opponent’s blower in the ice melting test. Tim, wielding the dragon-themed blower, easily melted the ice in seconds, acing the functionality test. Richard, wielding the fighter plane blower, barely got some droplets off of his hunk of ice.

Contestant Sean and his dragon-themed all-season leaf blower emerged from the challenge victorious. Tim and Richard could not help but acknowledge the difference in performance between the two blowers. Sean walked away from the competition $5,000 richer, but may have his name on a few watchlists after this build. All-season property maintenance tool or best weapon in a zombie apocalypse? The choice is yours.