A janitor sparked a massive fire in a car dealership 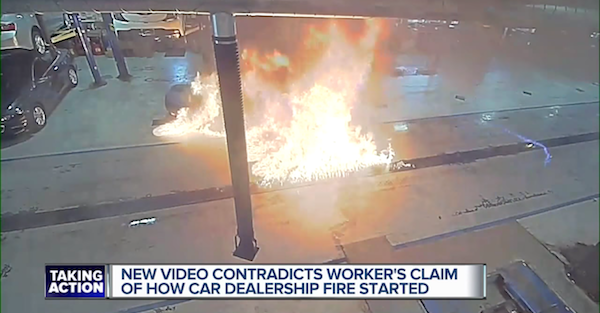 A man cleaning floors at a Chevrolet dealership in Sterling Heights, Michigan ran over gasoline with his floor buffer and sparked a massive fire in the dealership.

The man knocked over a gasoline container, but claims he didn’t notice it was leaking. When he came back to buff the same spot, the gas ignites, and it was caught on a security camera. About 30 cars were destroyed according to a local news source.

Related: Dodge?s new police cars have a feature that make them a cops best friend

The local news responsible for breaking the story said there was a discrepancy in the man’s story and what the security video footage showed, but there didn’t seem to be much difference in his story that couldn’t be explained by the fact that the man had just escaped an inferno.

It looked like the man made an honest mistake by knocking over the gas, and he picked it up and kept doing his job. It ended disastrously, and police ruled it an accident. Hopefully he didn’t sustain serious injuries.