Soap box derby has been a popular racing event for youths and families in the United States since way back in 1933. It's the perfect opportunity for young racers to develop their skills and get a start in their first racing program.

Now, soap box derby races are quite different from other types of racing. The main difference is that this involves gravity racing, meaning that the car itself is unpowered. The starting line is at the top of a hill, and you must rely on a downward sloped course to gain speed. Let's take a look at the history of the sport, and some kits available to build your very own soap box derby car.

It all started in 1933, when a photographer for the Dayton, Ohio newspaper, Myron Scott, witnessed a few friends racing down a hill. He was so intrigued that he decided to put together a last-minute race for 19 boys.

The event grew interest rather quickly, so Scott made another race, only this time on a larger scale, and it included prize money. More than 362 kids showed up for the second event. Each of them had their own custom race cars, made from crates, tin, or anything else they could get their hands on. The very next year in 1934, the All-American Soap Box Derby (AASBD) held its first championship race. The national winner of the first year was Robert Turner from Muncie, Indiana.

For 1935, they decided to move the location from Dayton to Akron, Ohio, because of the natural hilly terrain. The race organization saw much more publicity, after an accident occurred involving a driver crashing into a reporter during a live shot. Because of the increased interest following the incident, the organization attempted to put together a permanent local race track to use each year.

Akron civic leaders recognized the need for a track like this, and agreed to make it happen. Thanks to the Works Progress Administration (WPA), the Derby Downs track was built on George Washington Blvd. in 1936, and events were held for several years, though there was a break during World War II.

Throughout the '50s and '60s, the All American Soapbox Derby race was so popular that it saw a Chevrolet sponsorship, which lasted 35 years, and tons of big-name celebrities would be in attendance. Some years, as many as 70,000 people would show up to cheer on the drivers on race day.

Today, there are much broader categories of the racing to include larger age groups, and allow adults to help in construction for certain parts. You can also find International Soap Box Derby (ISBD) leagues all around the world now. That said, the annual World championship race in Akron does continue to happen each year, however, the FirstEnergy All-American Soap Box Derby was canceled in 2020 due to the coronavirus pandemic.

Thanks to the ISBD's official website, there are a ton of different soap box car kits you can purchase and build yourself. This makes things easy, if you're looking to get involved yourself in the racing series.

This Super Stock car is available on the site, and it comes with everything except the wheels for the car. In the kit, you'll find the plastic shell, floorboards, steering, axles, brake assemblies, hardware, and an official helmet. 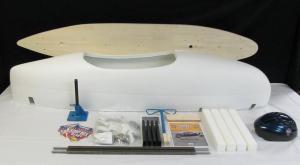 Here's another kit, which they've labeled the Legacy Car. It's a much more affordable car, but it does require a little more work. You'll receive uncut floorboards, axles, headrest, helmet, and all the necessary hardware. 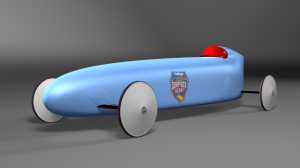 If you've got the cash to spare, and you're looking for a nice ride, consider the Masters kit. You'll find a four-piece fiberglass shell, steering assembly, instructions for building, and pretty much everything you'll need to complete it other than the wheels.

Now, if you're not looking to spend hundreds of dollars on top-of-the-line soap box derby kits, Amazon has some more affordable options, such as the Pinewood Pro Pine Derby Car Kit, which will only run you about $80.