The three-time Cup Series champ is still an avid racer in a number of different motorsports, and just recently, he decided to give something else a try: drag racing. Hey, they call the guy “Smoke” for a reason. Wherever he’s at, there’s bound to be some fire!

Stewart attended the Frank Hawley School of Drag Racing in Gainesville, Florida, and, naturally, he brought a camera crew along for the ride. Can’t do something as awesome as drag racing and not get footage of it.

Now, Hawley, who is a two-time NHRA Funny Car world champion, has been teaching for 30 years, and he definitely liked what he saw from Stewart.

?He?s world-class at anything he?s ever done, so it didn?t surprise me that he had no problems,? Hawley said. ?He was a great guy, easy to talk to, and very humble. What a neat guy.?

Read More: Tony Stewart Punched a Heckler, and It Was Caught on a Fan?s Camera

Stewart, who was featured alongside NHRA Top Fuel star Leah Pruett in the video, started with some passes in the Super Comp car. He then moved into the Alcohol Dragster, which comes with a Crowerglide transmission and shifts automatically as opposed to the traditional manual 3-speed of a normal NHRA blown alcohol dragster.

?We use that setup to allow new drivers to learn the routine you would use to drive an A/Fuel [Dragster] or Top Fuel car, but they?re still plenty fast,? Hawley said. ?We want them to see how it steers and handles and what you can and can?t do with it. Obviously, for someone like Tony who is used to seeing the world at 200 mph or faster, that wasn?t an issue.”

When it was all said and done, Tony earned his Top Dragster license. He’s got a little more work to do to get his Top Alcohol or Top Fuel license, which is what he would need to compete at the highest level. Of course, this all begs the question: Is Tony Stewart actually thinking of competing in the NHRA? Only time will tell. 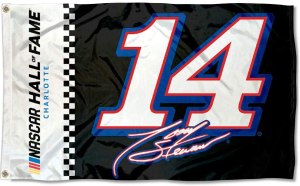