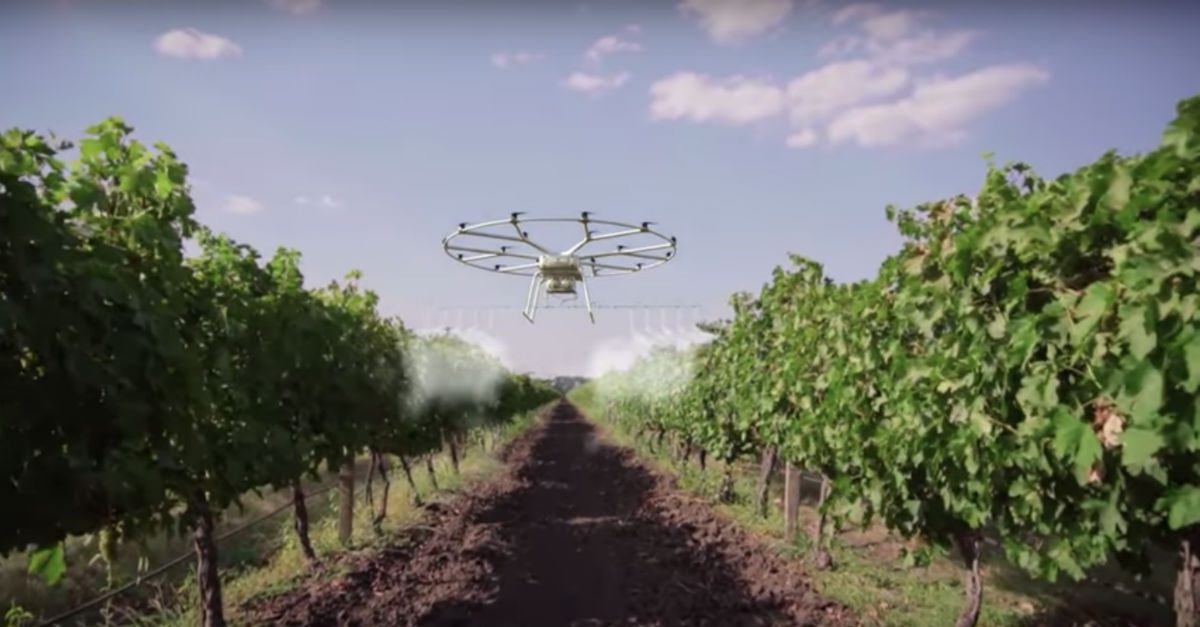 You know John Deere for its tractors and construction equipment, but now the Illinois-based company is trying something a little bit different by getting into the drone technology business. In a joint press release, John Deere and Volocopter, a drone startup company based in Bruchsal, Germany, announced that they would be teaming up to develop a cropdusting aircraft system called VoloDrone.

“Large drones are becoming increasingly important, not just in the field of logistics but also in passenger transport. At the same time, small drones are already being used in agriculture for stock control and mapping, for example,” the press release read. “Both companies see great potential for the VoloDrone?s use in agriculture, with capabilities ranging from difficult topography to increased efficiency in the use of crop protection agents, sowing seeds or frost control. The development of this demonstrator is a first step towards bringing this innovative technology closer to commercial application after full testing in the field.”

As a joint venture, John Deere and Volocopter unveiled the VoloDrone last week at Agritechnica, a global agricultural engineering industry trade show in Hannover, Germany. However, VoloDrone debuted the first flight of the VoloDrone demonstrator at the end of October.

How Does VoloDrone Work?

Capable of carrying a payload of 440 pounds up to 25 miles, the VoloDrone has 18 rotors and is equipped with a fully electric drive that is powered by exchangeable lithium-ion batteries. It can churn out 30 minutes of flight time with one battery charge. Users will have the option to pilot the agricultural drone remotely or set it on a pre-programmed path.

As for John Deere’s contribution, the VoloDrone will also be equipped with a sprayer along with a pump and two tanks. This tank setup will be capable of dispensing everything from pesticides to liquid fertilizer to anti-frost agents.

With the potential to be a more efficient and cost-effective alternative to helicopters when it comes to fertilizing, the VoloDrone will be subject to flight and application tests over the next growing season, according to the joint press release.

Read More: This Drone Footage of a 1,060 HP Corvette Drifting Is as High-Octane as It Gets