Cow Enjoys Fun Ride in the Backseat of a Pickup 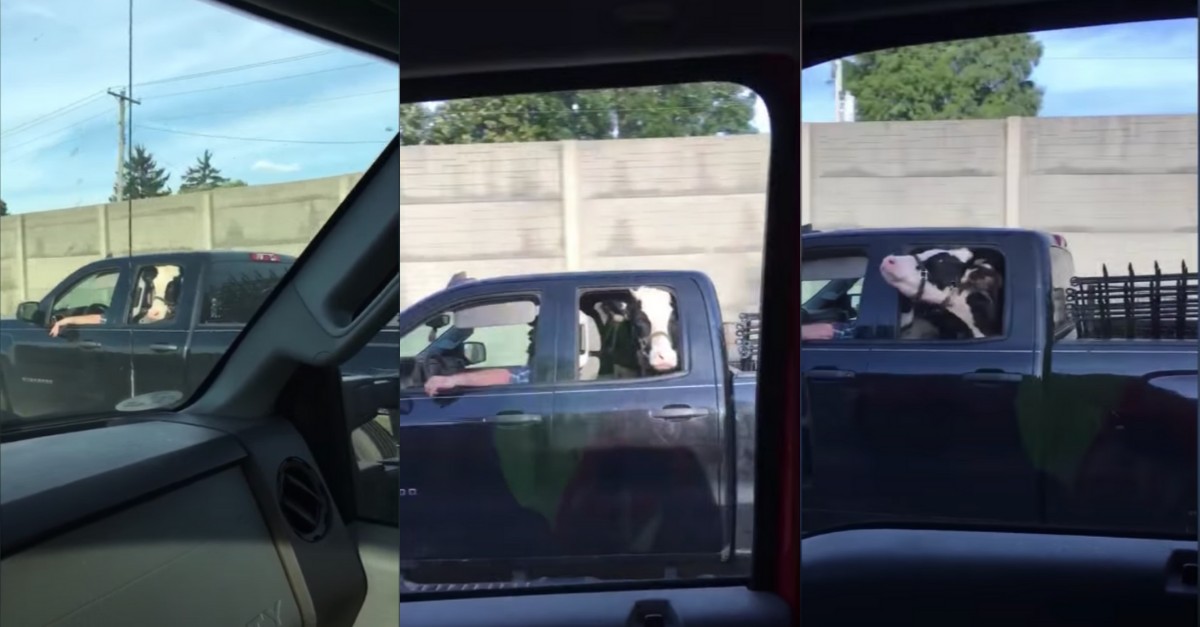 It’s not every day that you see a cow riding in the backseat of a pickup truck. In fact, it’s about as rare as seeing a cow…pretty much anywhere besides a farm.

So, when JD Blair of Tipp City, Ohio, spotted a full-sized cow just chilling in the backseat of a Chevy Silverado, he did what most of us would do in that situation and whipped out his cell phone and started filming.

Read More: Video Captures a Crazy Road Rage Driver on I-75 in the Dayton, Ohio Area

So, what’s the story behind this truck driver and his cow passenger? Were they on their way to a local cow convention? Was the cow hitchhiking its way across the country? Did the cow just sneak in the backseat without the driver even noticing?

It’s actually none of the above, but thankfully, due to a little bit of local news digging, we’ve got the inside scoop on the close enCOWnter.

The man in the video driving the truck is Cory Morris of Ludlow Falls. Morris said the cow, “Annie,” is a rescue who he’s had since she was a day old. She was rescued after her mother rejected her at birth. She fits right in with Morris and his family — he says don’t let the other animals he owns know, but she’s his favorite. The 18-month-old cow now weighs 800 pounds and regularly rides in the backseat.

Morris said he gets questions from people regularly about her riding in the truck, to which he replies, “where else would I put her?” He says he just opens the door and she climbs right in. They regularly go on rides together to McDonald’s where Annie will get an ice cream, one of her favorite treats. With the video closing in on 8 million views, Morris said he’s “floored” by the excitement people have over his cow, “I love that she’s now appreciated by so many people.” As Annie continues to grow, the number of rides she’ll be able to take are dwindling, simply due to her size.

Say what you will about the unconventional move, but Cory Morris is absolutely changing the game when it comes to animal transportation. Not to mention, he’s made an absolute viral superstar out of Annie the Highway Cow.

And, on top of all of that, he’s personally inspired me to tack on a new item to the ol’ bucket list, and that’s eat ice cream with a cow.