However, neither Stanley Tucker nor salesman Harry Phillips knew this fact when Tucker bought this first Mustang ever sold. But, the story doesn't end there. It took quite a lot for Ford to get Tucker to let go of the mistakenly sold unit. Let's take a look at this intriguing piece of pony car history.

The First Mustang Ever Sold

So, as it turns out, the first Mustang ever sold should never have hit the streets. But, that didn't mean the sale wasn't binding. So, Ford had to get creative in their attempts to buy back the pre-production car, which was essentially a practice unit for the workers that would be manufacturing the production Mustangs.

When it was sold, this first Mustang sat on a lot in St. John's Newfoundland three days before Mustangs actually went on sale to the public. An interested customer passed the display, however, and had to have it. Stanley Tucker, an airline pilot, purchased the unit, which needed to sit on display for another week to advertise the upcoming sale, which it did. But, Stanley came in every day to make sure it was in good shape.

And, when the Mustang was ready to leave the dealership, Stanley claimed his purchase. But, Ford quickly realized its mistake and spent the next two years attempting to get the unit back -- especially as the popularity of the model grew and it became apparent that the unit would be of some worth in the future.

After two years of prying, Ford eventually got the first Ford Mustang ever sold back in exchange for the millionth Mustang ever produced, which was a beautiful 1966 model in the premium trim -- a valuable unit.

How Much Did the First Mustang Sold Cost?

At the time of the Mustang's sale, it went for $4,300 Canadian Dollars, or about $3,200 USD. That'd be about $26,000 USD today. Today, you'd be hard-pressed to put a price tag on the 'stang since it's the very first unit of one of the most iconic vehicles ever produced.

The Story Didn't End There

Once the Mustang was back at Ford Motor Company, it was rolled into storage, where it remained until 1984 when it was put in the Henry Ford Museum in Dearborn, Michigan. For decades, Harry Phillips hoped to be reunited with the Mustang he once mistakenly sold, creating an unlikely collectible and historical artifact.

To accomplish his goal, Harry's granddaughter started the social media campaign "Send Harry to Henry." And, the campaign accomplished its goal on September 27, 2019, after he was officially invited by the Henry Ford Museum to come view and sit in the 001 Mustang!

As it turns out, this wasn't the only Ford Mustang sold on April 14th, 1964, three days before the first Mustangs actually went on sale. In a wild coincidence, Chicago teacher Gail Wise also purchased a Mustang before she should have been able to. Her new Mustang, however, was a street-legal production model, so she was able to keep the new car. And she did...for 57 years. Today, Gail still owns the Mustang, which is now worth upwards of $340,000! 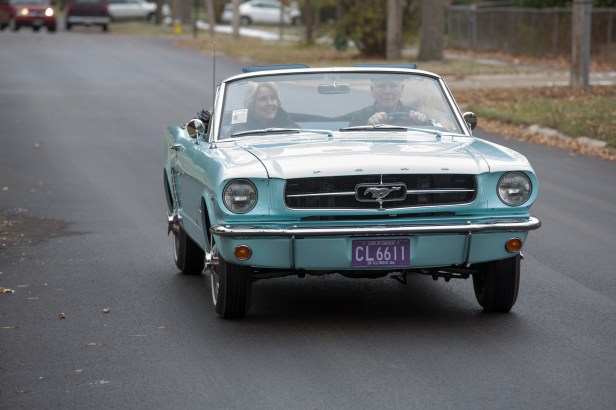 Tom Wise, Gail's husband, doesn't think she'll ever sell it, though. If he couldn't convince her to sell it after it broke down decades ago, he's sure he can't now, since it's a valuable collector's item and all. Original owners can be a bit stubborn, as it turns out. Detroit Free Press reported that Gail's unit was shown at New York's World's Fair last year alongside the brand new 10 millionth Mustang. How incredible is that?!