’56 Ford Thunderbird vs. ’59 Chevy Corvette: Which Is the Better Classic Car? 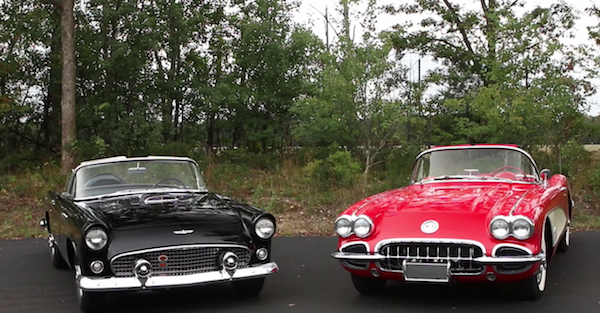 Brian Harper and Clayton Seams from Driving.ca were definitely onto something when they came up with this YouTube series that pits classic cars against each other in a looks/performance comparison. Eschewing a lot of the modern twists and gadgets that take up all of the available space in modern sports cars, the ’56 Ford Thunderbird and ’59 Chevrolet Corvette were two beautiful examples of American engineering. Needless to say, they’re definitely worthy of competing in a head-to-head match-up.

Starting with the Thunderbird, this car was decided to be the prettier of the two when it was all said and done. The wide, rounded grille and headlights will seem familiar to Ferrari fans, and it just pops like nothing else in that Ford black. But, for everything it holds in the looks category, the Thunderbird still drives like what you might expect from a ’50s Ford.

Read More: Watch This Angry Woman Absolutely GO TO TOWN on Her Husband?s Corvette with a Golf Club

Next up is the eventual winner, the Corvette. The first-generation Corvette is one of the most iconic-looking cars ever produced, with its signature four headlights. Both these cars sported beautiful interiors, but the ‘Vette had more fine details, which is to be expected considering its higher price tag. The Corvette was also much quicker and the handling felt more responsive.

Now, when it comes to an ultimate purchase, most classic car enthusiasts (and by “most” I mean those with a limited budget who can’t afford to just cop both cars) will need to do some soul-searching. Are they looking to turn heads with the car’s aesthetic or get the people going from a speed and performance aspect? A very important question indeed.