Remember the Chevy Vega? You know, the classic car that got more "smiles to the gallon" than any of its American competitors? It got roughly two by the way. You absolutely have to remember the car's infuriating tendency to park itself, in coordination with other Vegas, in facial shapes.

Ringing any bells? If anything, you may recall the Vega as the overwhelmingly underwhelming Chevy curse gifted to John DeLorean by a collection of General Motors corporate designers. In his book, On a Clear Day You Can See General Motors, the former GM chief engineer described the Vega:

"[The Vega] produced a hostile relationship between the corporate staffs, which essentially designed and engineered the car, and Chevrolet Division, which was to sell it. From the first day I stepped into Chevrolet, the Vega was in trouble. General Motors was basing its image and reputation on the car, and there was practically no interest in it in the division. We were to start building the car in about a year, and nobody wanted anything to do with it. Chevy's engineering staff was only going through the motions of preparing the car for production, but nothing more. Engineers are a very proud group. They take interest and pride in their designs, but this was not their car and they did not want to work on it."

You're probably still wondering where GM went wrong with this automotive disaster, right? We're guessing they are, too. 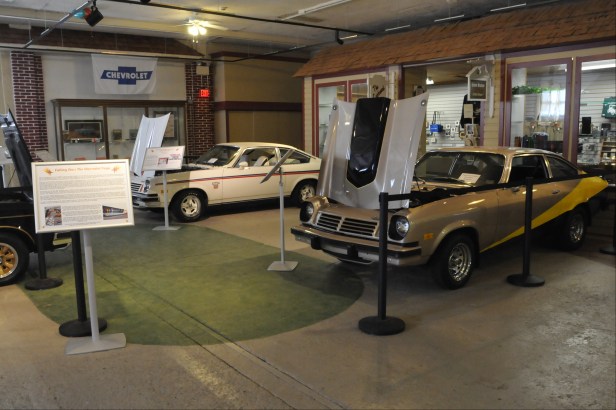 Read More: A Brief History of the 1970 Chevy Camaro

The Quick and Dirty History of the Chevrolet Vega

Manufactured and marketed from the 1970 to 1977 model years, the Chevrolet Vega program was first introduced to GM's president by GM's executive vice-president Ed Cole. While the Chevrolet and Pontiac divisions presented their own small-car programs (plus, Chevy already had the Corvette going for it), General Motors ended up going with Cole's new car proposal.

Powered by an inline four-cylinder engine with a lightweight, aluminum block, the subcompact vehicle was available in the Vega hatchback, notchback sedan (later renamed the coupe), station wagon, and panel delivery. Initially, the Vega (also known as the Vega 2300) was a hit at dealerships across America and received high praise for its visibility, performance, and fuel economy. It was awarded the 1971 Motor Trend Car of the Year, and other magazines compared it to such cars as the Ford Pinto, Volkswagen Beetle, AMC Gremlin, and Toyota Corolla. The Vega would go through several assembly plant variants in Lordstown, Ohio and South Gate, California, including the the Chevrolet Vega GT, the Cosworth Vega, and the Vega Kammback wagon, which saw limited production. No Motor Trend accolades would be awarded to the Cosworth or any other new Vega models, and it would end up going through a series of recalls and body style redesigns.

Ultimately, the number of problems associated with the little car -- from cooling system issues that caused overheating with the aluminum engine block to subpar safety standards to a tendency to rust -- led to a decrease in Vega owners and caused General Motors to suffer as a result. Of course, many articles and think pieces have been written about the Vega's quick decline. For example, the April 2000 issue of Collectible Automobile magazine said that, "the Chevy Vega has become a symbol of all the problems Detroit faced in the '70s."

Though the Vega styling was used by several rebadged variants like the Chevrolet Monza and Pontiac Sunbird (which used Pontiac and Buick engines), it turns out that the Vega (named for the brightest star in the constellation Lyra) didn't end up burning so bright in the end.