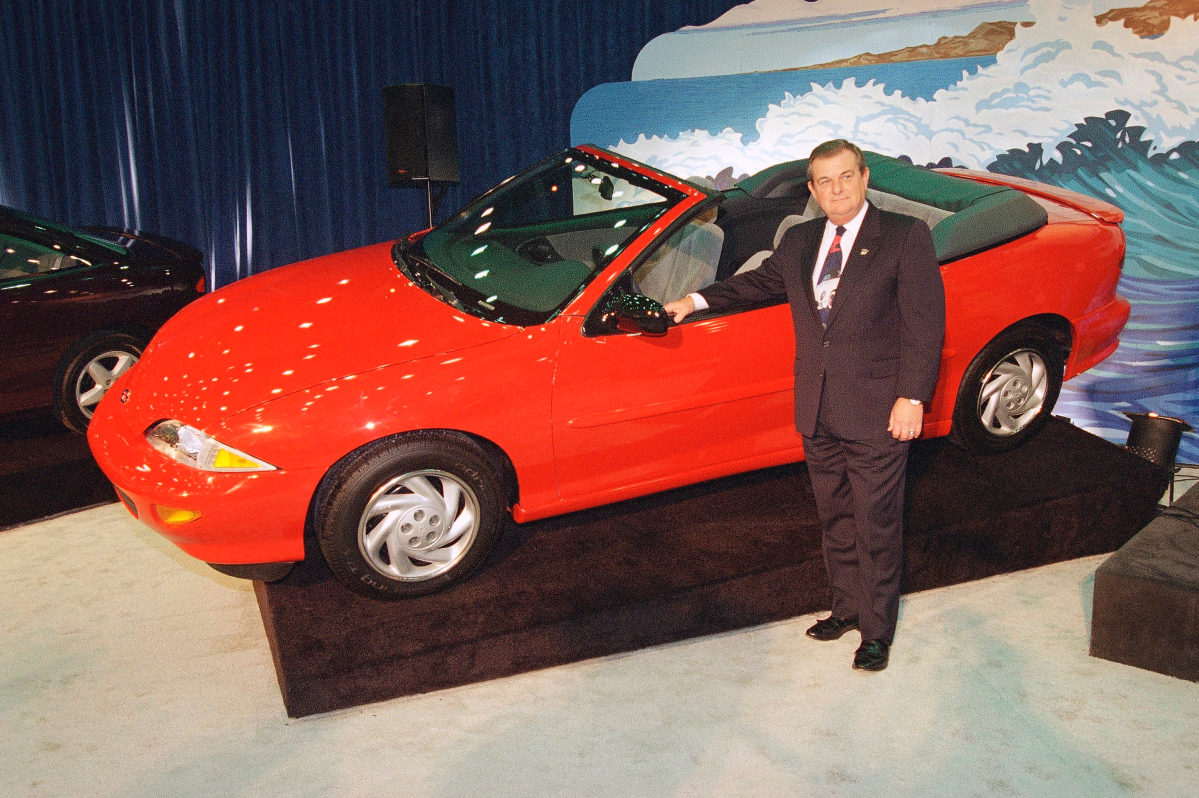 If you’re a Gen-Xer, or even a Millennial, chances are good you have a fond memory that involves bonehead teenager antics and a Chevrolet Cavalier.

The Chevy Cavalier first saw production in 1982 and clung to its title of “Everyone’s Favorite Entry-Level Car,” until the Chevy Cobalt came along in 2005 to claim that crown. You could say that the Cavalier is “just an ordinary car,” and you wouldn’t be wrong.

But, for an entire generation, “The Cav” was a first car, a first brand-new car, or the scene of many firsts in the journey of life.

The earliest Cavaliers were boxy, almost regal affairs that conformed to the very angular styling of the early 1980s. Manufactured alongside other General Motors vehicles such as the Buick Skyhawk, Cadillac Cimarron, and Oldsmobile Firenza, you’d be forgiven for thinking the four vehicles bear more than just a passing resemblance to each other.

The Cavalier, however, was a car built for the average driver, which means a variety of choices for a variety of drivers. In the first generation, Chevy experimented with a two-door, four-door, hatchback, and station wagon version.

The Evolution of the Chevrolet Cavalier

On paper, there was nothing incredibly special about the Cavalier. Most featured a 2.2-liter four cylinder engine that didn’t even offer 100 horsepower — at least, not until 1992. An optional V6, reserved for the higher trim levels, managed to climb up to 140 horsepower, but the truth was, you weren’t in it for the speed and performance.

The VL was the base trim among Cavalier models, and pricing for this model in 1992 was just slightly under $9,000, brand new. Plus, drivers were looking at a very reasonable fuel economy of 25 mpg city and 36 mpg highway, meaning this new car practically paid for itself.

Chevy noticed this and offered a major redesign for the 1995 model year, marking the third generation by giving drivers more of what they wanted and needed for the price.

1995 was a big year for entry-level vehicles. The Pontiac Sunfire, the Ford Escort, and the Dodge Neon were all very big. Huge. Not in size, but in popularity. By this point, all of Generation X had their driver’s license and wanted a car that was cool, but could be paid off on the type of salary you make working at the local grocery store after school.

The body style of the third generation was very different. Boxy “grandma boats” were best left on the used car lot. The station wagon was gone. The new Chevy Cavalier was curvaceous, with clean, aerodynamic lines.

The two-door Cavalier coupes featured a 2.2L 4-cylinder engine, which was paired to a 5-speed manual transmission. Cavalier convertibles and sedans had a 3-speed automatic transmission. Front-wheel drive was standard.

Drivers were treated to all sorts of new conveniences, including airbags, air conditioning, power steering, and stain-resistant cloth upholstery. This may seem painfully basic by today’s standards, but bear in mind we were still buying cassette tapes from the record store at the mall in 1995. It was a different time.

Fast Forward to the End

As the 1990s faded into the new millennium, things changed. Maybe Y2K is to blame.

Chevrolet provided the Cavalier with the occasional makeover through the early 2000s. The LS Sport, for example, was offered in 2002. Its powertrain provided a hearty 140 horsepower, and the brand new Ecotec engine brought great news for those concerned with fuel economy. In fact, this engine became the standard for the 2003 model year and beyond.

On the flip side — pun somewhat intended — the Chevy Cavalier performed very poorly in crash tests. The Insurance Institute for Highway Safety (IIHS) and National Highway Traffic Safety Administration (NHTSA) were not impressed by the third generation of Cavalier, citing more deaths per million vehicles for the Cav than other vehicles in the small car class.

The spirit of the 1990s Chevrolet Cavalier lives on in models like the Chevy Cruze, which also hits the sweet spot between “functional,” “cool,” and “economical.” For one very nostalgia-laded decade, however, drivers on a budget had the sweetest ride of any generation before or since: the Chevy Cavalier.

But, Is It Actually the End?

Good news: the Chevy Cavalier is coming back! Bad news: it’s not coming to U.S. markets, at least not for the foreseeable future.

The 2022 Chevrolet Cavalier Turbo is set to launch in Mexico, and is expected to be stocked with a 1.3-liter I3 engine that makes about 161 horsepower and will be mated to a six-speed automatic transmission.

The Cavalier performed especially well in Chinese markets over the years, so while the move to North America could be a could sign, don’t be holding your breath for its return to the States anytime soon.