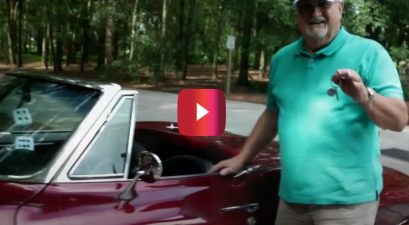 Without a doubt, The Blues Brothers movie is a classic comedy that everyone should see. For those who have never watched it, let me direct your attention to the video above. This car chase scene from the 1980 film is absolutely epic, and we can thank director John Landis for that.

Not only do we see just an absurd number of police cars involved in the Chicago, Illinois chase, but we really get to witness what that 1974 Dodge Monaco, nicknamed The Bluesmobile for the movie, was capable of. The best part is that this wasn’t some Hollywood stunt where they speed up the film to make it look better. The stunt driver was actually racing this classic car away from the squad cars at nearly 120 MPH for some shots. The chase gets even better at the very end, leaving a massive pile of cop cars and tons of police officers opening fire on the vehicle. It was beyond over the top, but I think that’s part of what makes it so great.

The Bluesmobile: A 1974 Dodge Monaco

Even if you haven’t seen The Blues Brothers, you probably know that Saturday Night Live stars John Belushi and Dan Aykroyd played Jake Blues and Elwood Blues, respectively, in the movie. It’s a star-studded cast, for sure, and even Aretha Franklin had a memorable cameo. They picked the right cast for sure, but since this is a gearhead website and all, it only seems right to talk a little bit more about the vehicle used in the film. Let’s check out what made this former cop car so awesome. It wasn’t exactly your average ’74 Monaco.

In the film, Elwood purchases a decommissioned Mount Prospect police car and attempts to convince his brother Jake on the car by saying, “It’s got a cop motor, a 440-cubic-inch plant. It’s got cop tires, cop suspension, cop shocks. It’s a model made before catalytic converters so it’ll run good on regular gas.” Seems reasonable enough, but Jake didn’t fully approve of the car until he got to experience it in action.

During the movie, we see the Monaco jump over a drawbridge, and spend a good portion of time in the air. The amount of slams that this vehicle took should definitely attest to the extremes that you can put them through. There was a downside, though. The cigarette lighter doesn’t work, but Jake is pretty quick to throw it out of the window.

Now, the Dodge Monaco actually was a pretty interesting car that helped increase Mopar popularity. The ’74 year model marked the start of the third-generation body style. Although sales weren’t through the roof during the time, mainly because of issues regarding the oil crisis, you still got a lot of car for the money. I do mean that literally. This full-sized C-body was massive, but you match it with the 440-cubic-inch engine, and it certainly moves.

To prove just how outrageous the chase scenes were, this movie held the record for the most destroyed cars during filming at the time. Fun fact: The record was actually broken by Blues Brothers 2000 about a decade later. In this film, they switched the movie car to a 1990 Ford LTD Crown Victoria. While it’s cool the new Bluesmobile continued the retired cop car tradition, the Crown Victoria doesn’t even come close to being as cool as the retro Dodge Monaco in the first film.

I wish they would still make car chases like this in today’s movies, rather than putting unnecessary explosions anytime a car wrecks. Go give it a watch, and enjoy some crazy action. You’ll see for yourself why the car became the star in its own right.