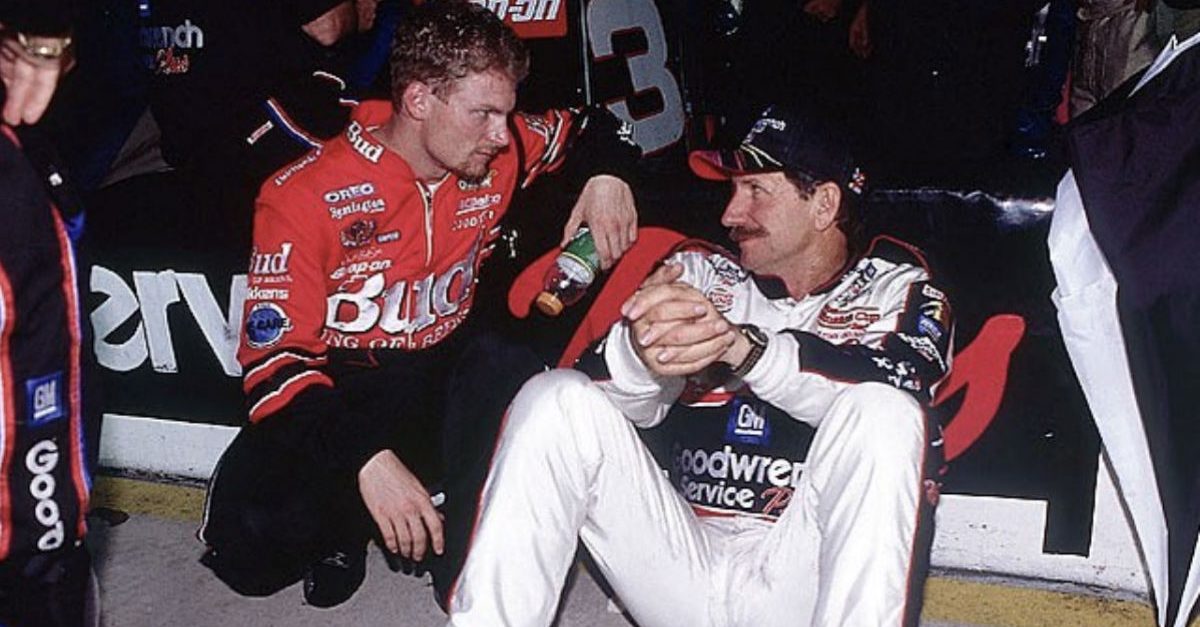 On February 18, 2001, the entire racing world was completely devastated when Dale Earnhardt died from injuries sustained during a crash at the Daytona 500.

If complete strangers reacted the way they did to Earnhardt’s death, then you can only imagine how the late NASCAR legend’s son, Dale Earnhardt Jr., felt after that fateful day. Sure, Junior may not have had the easiest childhood growing up in the shadow of a NASCAR giant, but Dale Sr. was not only a father to Dale Jr., but a hero and mentor as well.

Though it may have been 17 years since Earnhardt tragically passed on, Junior celebrates his dad’s memory as often as possible.

Even with all the things he has going on — from owning JR Motorsports to working as a broadcaster on NBC to hosting a weekly podcast to taking care of his kid — Dale Junior still makes a point to search for that special T-shirt every single day on eBay.

This is the shirt I’m looking to add to my collection one day. I have one that fits Amy. But I’m looking for an XL of my own to wear. It’s literally the one reason I search eBay daily. #ThrowbackGoals pic.twitter.com/xMImz9aXPx

Read More: Dale Earnhardt Jr. says he had two choices after his dad?s death at Daytona

As Dale points out in the above tweet, his wife, Amy, is lucky enough to be a proud owner of the vintage shirt, but Junior is still looking for one that fits him just right.

Oh, and for all of you wondering why the hell Junior is looking for the shirt in an XL, he cleared that up in a follow-up tweet.

Hopefully, Dale eventually gets his hands on that elusive T-shirt. But, until then, he’ll just have to make due with the tons of other Dale Earnhardt vintage T-shirts in his collection.

#Repost @dirtymomedia with @get_repost ・・・ Had to represent the legend tonight up in the big 🍎 @fallontonight was a good time. They shoulda known I had my own cooler scooter all these years and was ready to kick ass and drink beer.

Making my rounds this morning. #Daytona500

A new podcast is up @dirtymomedia @dennyhamlin is our guest. We covered a lot of topics from drivers unions, drivers councils, secret meetings, and how he’s completely misunderstood by most Nascar fans, and even some drivers. Listen and see if you agree.

Watch: Dale Earnhardt Jr. opens up about his childhood and makes a surprising admission