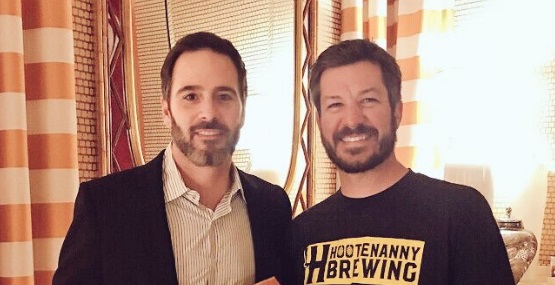 A somewhat secret NASCAR tradition was started by seven-time champion Jimmie Johnson exclusive to title winners and he recently revealed it on social media.

After winning five consecutive titles from 2006-10, Johnson was puzzled as to why there wasn’t something for winning drivers to pass down to one another, year after year.

Johnson had a chat with NASCAR’s vice-chairmna, Mike Helton and the end result was a champion’s journal. After Tony Stewart won the title in 2011, the journal was passed down to him with the inaugural entry from Johnson, according to For The Win.

Johnson shared a photo of the coveted journal to Instagram. Giving some folks their first look at a special piece of recent NASCAR folklore.

After winning a few championships I was curious why there wasn’t something passed down from champion to champion. I chatted with Mike Helton about it and he gave me the idea of a Champions Journal. So in 2011, I started the journal and gave it to @tsrsmoke at the Banquet. It’s been passed along since and last night I had the pleasure of passing it to @martintruex_jr. @nascarhall @nascar

Johnson has won two more titles since the inception of the journal, including last year, so he was able to hand it down to this year’s champ Martin Truex Jr.

In addition to Johnson, Stewart, and Truex, Brad Keselowski (2012), Kevin Harvick (2014) and Kyle Busch (2015), have all had possession of the champions-only prize.

While it’s only been around for a short time, if the tradition continues it has the chance to be rather historic. To have the ability to read the handwritten entries, from champion to champion, well that would be priceless.