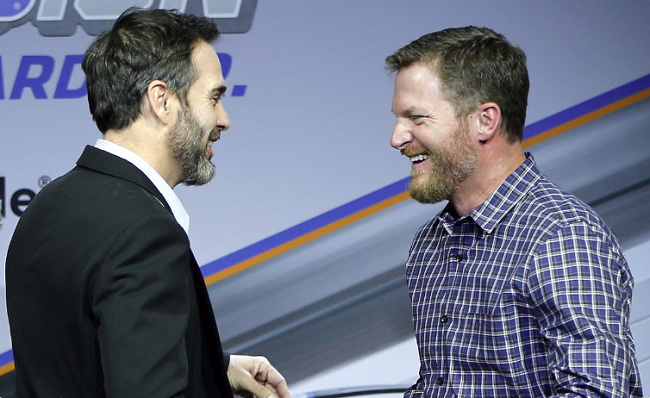 One of the most memorable moments of Dale Earnhardt Jr.’s farewell season came when he confessed to intentionally wrecking quite a few drivers throughout his career.

Dale Jr. made this confession with just a few races left as a full-time driver and many of the competitors he named were either no longer racing in the Cup Series or were competing for the championship, so he had no reason to fear any retaliation.

However, one driver that has no plans to retire anytime soon is seven-time NASCAR champion Jimmie Johnson. The 42-year-old Johnson previously said he’s going to drive for another 2-3 years to pursue a potential record-setting eighth Cup Series title.

Unfortunately though, Johnson will have one driver to worry about in particularly after confessing to intentionally wrecking a fellow champion while appearing at Dale’s Jr.’s Appreci88ion event in Las Vegas.

When the host brought up the topic of Dale Jr.’s admission, he followed up by asking Johnson if he’d ever done the same, but the driver of the No. 88 Chevy tried to dodge the question – at least initially.

“I’m not ready to retire, so I’m not going to say anything,” Johnson said. “I don’t won’t to go through that. I don’t want to be blamed for that.”

Then Dale Jr. chimed in with, “You don’t have to name a name, but have you ever lost your cool and turned somebody around?”

That’s when Johnson let his guard down and confessed to intentionally wrecking Kurt Busch at some point during both of their careers.

“You’re right,” Johnson said after making the admission. “It does feel really good.”