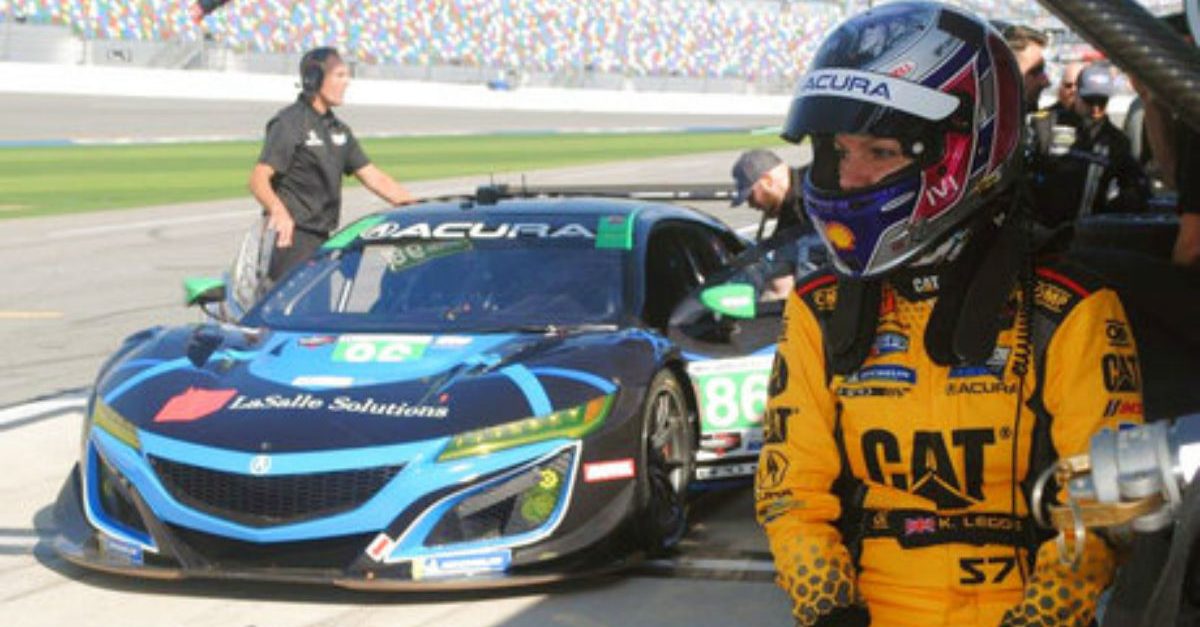 DAYTONA BEACH, Fla. (AP) ? Every racing series in the world is full of wealthy enthusiasts with ideas that sound too good to be true. Expensive promises to fund life-changing opportunities are usually broken before cars even make it to the track.

Jackie Heinricher has defied those odds and turned an outlandish idea into one of the most highly anticipated debuts in racing.

Two-time IMSA GT Daytona class champion Christina Nielsen will join the No. 57 Meyer Shank Racing Acura NSX GT3 Evo lineup for next month’s Rolex 24 At Daytona, having been drafted in to replace Jackie Heinricher, who has sustained a back injury that will prevent her from driving in the season-opening race. #Bestmotorsports #IMSA #IMSAWeatherTechSportscarChampionship #ChristinaNielsen #JackieHeinricher

She has put together an all-female team of drivers that will debut later this month at the Rolex 24 at Daytona, one of the most prestigious endurance races in the world. Her vision became a reality because she found a commercial sponsor with Caterpillar, landed a partner in Meyer Shank Racing and signed up top racers ? all of whom wanted to be part of the unique project.

“I am scared, a little bit,” British driver Katherine Legge said. “I am scared that it will be gimmicky and we won’t be taken seriously. That’s why we have the drivers we have, that’s why we are going with a professional team, that’s why we made sure we had everything to do it right.”

“We are going to be under a spotlight whether we like it or not, and the last thing we want to do is go out there and be like the ‘girl team.’ That is detrimental to what we are trying to achieve.”

Heinricher is an Air Force veteran, scientist and founder of her own biotech company, Booshoot Technology, based in Sun Valley, Idaho. She is also the female equivalent of a “gentleman racer” in the world of exotic cars, which means she pays her own way for the right to race against professionals on the top circuits in the world. Heinricher found that racing was the same as the STEM field in that women are an anomaly. There just were not many female role models to follow.

Heinricher is a racing fan who often rooted for the female drivers, and just as the drivers themselves grew frustrated with their inability to advance in American racing, Heinricher grew tired of seeing the women leave the U.S. for opportunities in Europe.

We’re ready for you Daytona…

“I started having this vision to bring these top women professionals together to race a season together,” Heinricher said.

Then she had to sell it, to drivers and sponsors. Sports car racing is one of the few series that requires multiple driver lineups, and Heinricher’s attempt to field an all-female team in a world-renowned series is unprecedented.

“I’ve watched many of these things fall flat on their faces, go out in the press without any substance,” she said. “I started talking with drivers and I was always very transparent that I had to accomplish the money side. There was skepticism. They were like, ‘Who is this crazy gentleman driver woman? What does she want from us?'”

Legge has been part of enough crummy deals to be wary of hair-brained ideas. Legge was part of Lotus’ noncompetitive return to IndyCar, she was a centerpiece in the lineup for the weird DeltaWing sports car project and the announced driver for an Indianapolis 500 team that was going to be composed entirely of women. It never happened.

Our new @Acura #NSX purs like a kitty CAT

Legge knew of Heinricher’s idea for two years and agreed to be part of it because, for once, it looked as if the pieces were in place for something to actually come together.

Legge was already part of Meyer Shank Racing, and her Acura team won twice last season and finished second overall in IMSA’s GTD class. When Heinricher landed Caterpillar as sponsor for her vision, she was able to take it to Legge and the Meyer Shank team.

Then came signing the rest of the lineup. The roster for the twice-round-the-clock endurance race at Daytona is Legge, the full-time driver of the car, along with:

?Simona de Silvestro. A former IndyCar driver who has been a Formula One test driver, the “Swiss Missile” most recently competed in the Virgin Australia Supercars Championship.

Super positive day testing the @venturi_fe car. Thanks @massafelipe19 for lending me your car 😃. We had a big testing plan to go trough and learned a lot. Unfortunately no qualy mode run for us today but times were strong on 200 kw! Thank you team!

?Bia Figueiredo. She raced as Ana Beatriz in IndyCar because it was easier to pronounce, and the Brazilian was the first to win at that series’ second level and the only woman to win multiple Indy Lights races.

?Christina Nielsen. A two-time IMSA class champion, the Danish driver was brought in to complete the Rolex lineup because Heinricher injured her back in a crash testing the car in December.

The lineup has more combined experience and success than Danica Patrick, the most well-known female racer of this generation. And the group views it as a chance to further opportunities for women.

“Being the only girl you are given a hall pass. It’s, ‘Katherine is OK or Danica is OK,’ and you are taken as an independent person in a sea of women and they still make fun of woman drivers, but you are different somehow,” Legge explained. “And I am like, ‘No, that is not true. We can if we are given the opportunity to prove that we can do it.'”

“There aren’t that many girls coming up through the ranks. Give girls positive role models that aren’t just stripping off and posing on the front of a car. You go to a race track and you see ‘Grid Girls’ and very rarely do you see engineers, people working behind the scenes, working on race cars. If you are a parent, and you have a kid who wants to be in racing, I wanted to show that that’s not the only way you can do it.”

The team is slated to run the entire IMSA schedule, and Figueiredo posted the fastest lap in class during a qualifying session earlier this month. That proved the car is no joke, and the lineup goes into the Jan. 26-27 season-opening race determined to prove they can compete with their male counterparts and confident they may even win their class.

“I think we can be a contender for the race win,” Nielsen said. “We are all on the same page and have been for years. Kat and I frequently quote the saying ‘Once you are behind the wheel, the car can’t tell if it is a man or woman driving.”

Heinricher still plans to be part of the lineup at some point this season, but for now revels in her creation. She knows Legge worries about an effort that might set women back in racing. She is confident this venture will be different.

Great to be back at the roar! Thank you @racer_jackie @meyershankracing and everyone from the team for a great experience. A little detour now. Off to Europe until the 12th. So I will be OFF my American number again the next 6 days ✌🏻

“I never sold this partnership to go out and be on the podium every day. There are very few role models for young girls in STEM,” she said. “Part of this partnership is not only does this do that, but it steps into cars and leadership and the STEM side. If I put together Humpty Dumpty with six broken pieces, I am sure that would be a gimmick and we’d be laughed at all day long. I just wanted to work with professional people.”

Heinricher has a real race team, but Legge believes judgment will still be based on the bottom line.

“One race is not going to be gimmicky or not gimmicky, but over the season if we finish last every race, absolutely that would be gimmicky,” Legge said. “But that’s not going to happen with the people we’ve put in place.”