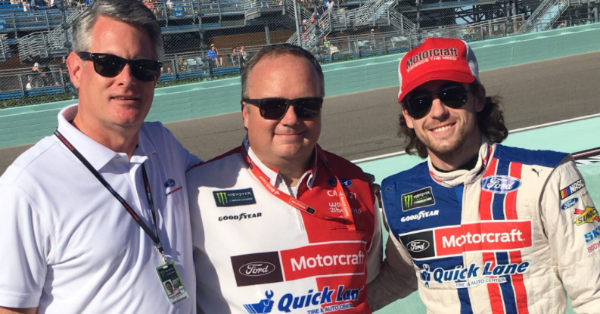 Team Penske is on a roll.

Penske has announced, on its website, yet another major sponsorship agreement, this time covering Ryan Blaney’s No. 12 in 2018.

The REV Group, a manufacturer of specialty vehicle brands serving the commercial, fire and emergency and recreational markets, will be an associate sponsor for the No. 12 all season and a primary on two races — the spring race at Bristol Motor Speedway and the fall race at Talladega.

REV is already a sponsor for Penske’s XFINITY Series and the Verizon IndyCar Series.

Penske also announced this week that has reached an agreement with Fitzgerald Glider Kits to sponsor its championship-winning No. 22 Ford Mustang.

While the No. 22 car has been piloted by several drivers this year, including Brad Keselowski, Sam Hornish Jr., and Ryan Blaney, it’s still leading the series standings when it comes to owner’s points. If truth be told, by winning the XFINITY Series title this year, it will mark Team Penske’s 4th team championship in five years.

With this type of championship pedigree, it might not surprise many race fans that Fitzgerald Glider Kits has signed on as the primary sponsor of the No. 22 Ford Mustang for 16 races next year and will also serve as an associate sponsor throughout the 2018 XFINITY Series season.

?Team Penske continues to grow its relationship with Fitzgerald Glider Kits and we welcome the company?s increased role as a sponsor with the No. 22 Ford Mustang team in 2018,? Roger Penske said, according to NASCAR.com. ?We work closely with Fitzgerald in our trucking business and the company has certainly made the most of its partnership with our race teams across different platforms since it joined Team Penske in 2016. We look to continue to build the Fitzgerald Glider Kits brand as we move to the next level next season.?

Penske had alreadyannounced the Würth Group will serve as a full-season associate sponsor of the No. 2 Ford Fusion and that AAA will continue its partnership agreement to sponsor the No. 22 stock car in the Cup Series.