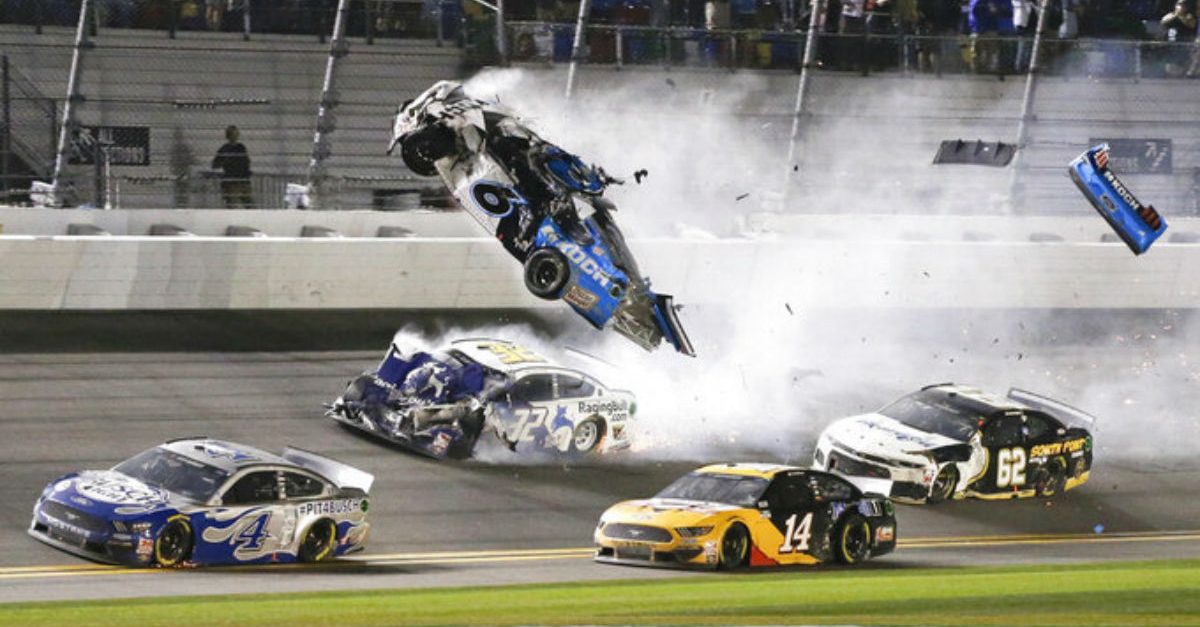 Denny Hamlin may have won the 2020 Daytona 500 on Monday, but it was Ryan Newman who was on the minds of every NASCAR fan, following a devastating crash on the final lap that ended in Newman’s car being flipped onto its roof and engulfed in flames. In an official statement released by Roush Fenway Racing on Monday night, the 42-year-old Newman was eventually confirmed to be in serious condition with non-life-threatening injuries.

While NASCAR faithful waited with anticipation for an update on the severity of Newman’s injuries, the tense situation brought to mind the tragic death of Dale Earnhardt at the 2001 Daytona 500.

Before the Roush’s official statement regarding Newman’s condition at Halifax Medical Center in Daytona Beach, Florida, many fans and reporters took to Twitter, sensing an eerie similarity to the afternoon of February 18, 2001, when Dale Earnhardt Sr. was pronounced dead at Halifax.

The same hospital, after the same race, Dale Earnhardt was taken to.. Really just puts a pit in your stomach. Praying for the best possible news for #RyanNewman https://t.co/uCgADvYLmt

The way Mike Joy and Jeff Gordon are talking so somberly leads you to believe Ryan Newman’s situation is very serious. (Gordon reminds me DW after the 2001 500, when Dale Earnhardt died.) Just awful .

The #DAYTONA500 is exhilarating, but this is hard to watch.

You immediately think about Dale Earnhardt on that very same track.

Michael Waltrip was not aware of what happened to Dale Earnhardt at Daytona right away either, those many years ago. #Dayton500
Praying for Ryan Newman. 🙏 @JonAlba https://t.co/Ok3eRMuQDZ

Watching it live, this Ryan Newman crash reminded me so much of Dale Earnhardt’s fateful 2001 crash, which happened 19 years ago tomorrow. NASCAR has come a long way safety-wise since then, but the final lap of the #Daytona500 is still just as scary a scene. Praying for Newman. https://t.co/xjkuJTYMgo

The way the media handled the closing of the #Daytona500 had all the feels of 2001 when Dale Earnhardt passed away. Being on the inside, you know what is going on and the somber mood everyone had was telling.

I remember the day Dale Earnhardt Sr. died, at the very same track.

Praying hard for Ryan Newman and his loved ones.

Now @FOXSports and @NASCARONFOX not showing Ryan Newman and his car as they get closer to getting him out. That bothers me. 19 years ago tomorrow Dale Earnhardt hit the wall at a very similar angle in the Daytona 500

Thankfully, those initial fears proved to be false. Following the reports of Newman’s stable health, many pointed to the safety measures implemented by NASCAR after Dale Sr.’s death as largely responsible for saving Newman’s life.

A lot of things and people saved Ryan Newman tonight.

One is the man who died 19 years ago tomorrow. The advances in safety made since Dale Earnhardt's death have been profound. pic.twitter.com/5hrCtwt2bf

Add Ryan Newman to the endless names of drivers who Dale Earnhardt saved. The Intimidator kicked ass on the track but one could argue his greatest legacy is the safety enhancements that came around because of his tragic death. (Photo by USA Today Sports) pic.twitter.com/eUuT9c0UQJ

Ryan Newman is going to be okay. What a testament to the advances in safety technology that NASCAR has implemented. This crash looked like a combination of Dan Wheldon’s crash and the Dale Earnhardt Sr. crash. What a miracle that he is okay. pic.twitter.com/OZgSll5cbX

Everyone stop and think about how Dale Earnhardt Jr must be feeling. Watching this go down at the same track where he lost his dad 19 years ago tomorrow. Yes, we need to pray for Ryan Newman, but we also need to send a prayer up for Earnhardt Jr because I can’t even imagine.

?Safety’s come a long way in this sport, but sometimes we are reminded that it is a very dangerous sport,” a somber-looking Jeff Gordon said in the Fox broadcast booth, as he and Mike Joy provided the initial update following Ryan Newman’s crash at Daytona International Speedway. Many pointed to Gordon having a similar demeanor to Darrell Waltrip, who called The Intimidator’s fatal wreck in 2001.

While Newman’s wreck was fortunately not fatal, it looked extremely intense. On the final lap of the Daytona 500, Newman’s Ford surged into the lead. That’s when the bumper of Ryan Blaney’s car caught the back of Ryan Newman’s car, sending him hard into the wall. His car flipped and rolled, and as it was flipping, it was hit on the driver?s side by Corey LaJoie’s car. Finally, Newman’s car, covered in flames, skidded across the finish line.

Denny Hamlin was criticized for immediately celebrating his win after Newman had just wrecked, though the Joe Gibbs Racing driver later said that he was not aware of the seriousness of the crash.

First a foremost I want to give well wishes and prayers to @RyanJNewman. I had absolutely NO IDEA of the severity of the crash until I got to victory lane. There’s very little communication after the finish and i had already unhooked my radio. It’s not anyone’s fault. 🙏Rocket

In addition to Hamlin’s comments, JGR owner Joe Gibbs also apologized, saying, “Some people may have saw us and said, ‘Those guys are celebrating when there’s a serious issue going on.'”

“I apologize to everybody. We really didn’t know. We got in the winner’s circle, and then that’s when people told us. I wanted to explain that to everyone.”

Dale Earnhardt was killed on the last lap of the 2001 Daytona 500, after crashing into a retaining wall due to contact with Sterling Marlin and Ken Schrader.

The seven-time NASCAR Cup Series champion and all-around icon in the sports world was officially pronounced dead at 5:16 p.m. EST on February 18, 2001. His death had been broadcast live to more than 17 million viewers.

Earnhardt’s death marked a tragic trend in NASCAR at the time, as he was the fourth NASCAR driver killed by a basilar skull fracture during an eight-month span. His death followed Adam Petty’s (May 2000), Kenny Irwin Jr.’s (July 2000), and Tony Roper’s (October 2000).

NASCAR safety improvements made in the wake of Earnhardt’s death includes the mandated use of head-and-neck restraints, the installation of SAFER (Steel and Foam Energy Reduction) barriers at oval tracks, the implementation of new inspection rules for seats and seat belts, and the development of a roof-hatch escape system. Since Earnhardt’s death, no Cup Series driver has died during a race.