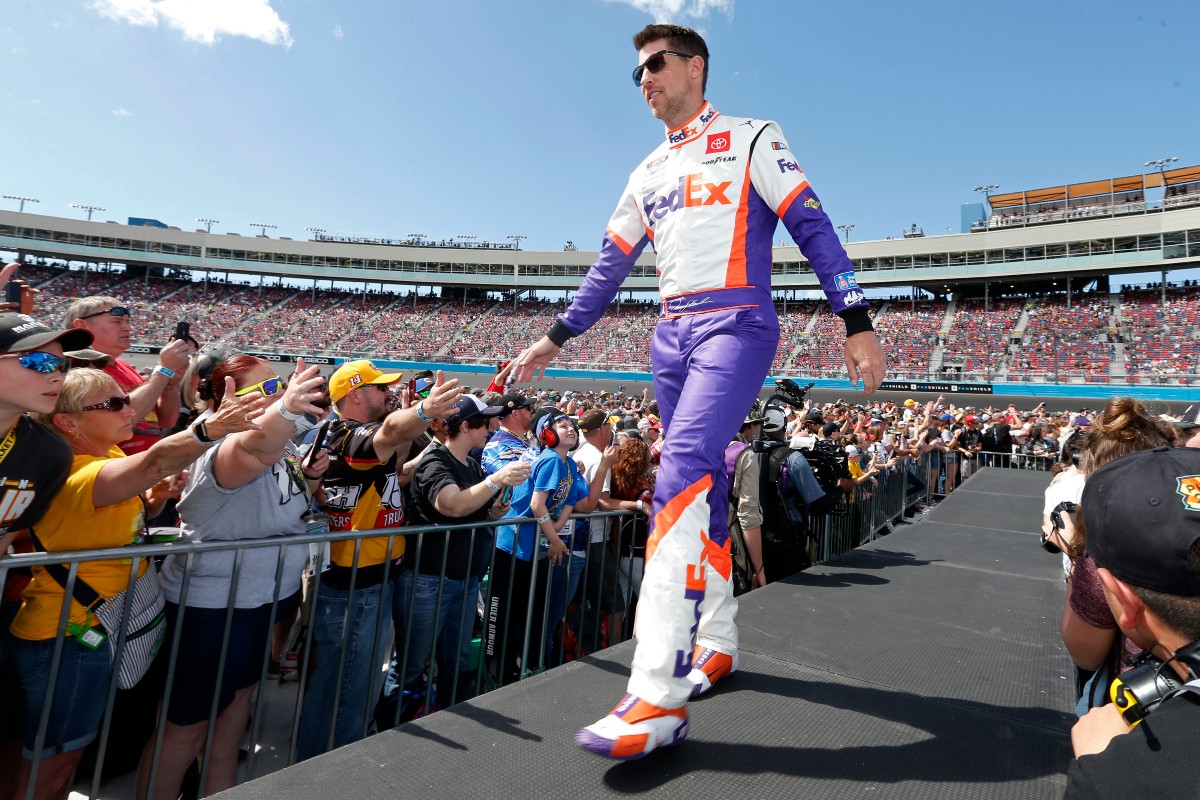 Denny Hamlin has made a seriously lucrative career at NASCAR’s highest level for a long time now. Sure, he doesn’t have a NASCAR championship yet, but he’s been counting his millions for quite some time now.

Here, we’ll look at some major Denny Hamlin moments from over the years and show just how much he’s worth these days. Hint: It’s a lot. And, as you’ll see, there’s a reason he’s one of the richest NASCAR drivers racing today.

Born James Dennis Alan Hamlin to Dennis Hamlin and Mary Lou Hamlin, Denny Hamlin claims Tampa, Florida as his birth place, but was raised in Chesterfield, Virginia for most of his childhood. Like most professional racers, Hamlin started his motorsports career early on by racing go-karts at the age of seven. At 15, he got his first taste of glory, winning the WKA manufacturers cup.

Eventually, Denny moved on to Late Model Stock Car racing, and after several years of success there, he signed a driver development contract with Joe Gibbs Racing in 2004. He started out in the NASCAR Craftsman Truck Series (now the Gander Outdoors Truck Series), where he has racked up two wins and 10 top-10 finishes out of 16 races.

In 2005, Hamlin competed in his first full season of the NASCAR Xfinity Series (back when it was the Busch Series). Today, he still competes part time in the series, where he’s racked up 17 wins and 100 top-10 finishes.

2006 marked Hamlin’s first full season in the NASCAR Nextel Cup Series (now the Monster Energy NASCAR Cup Series). He started his Cup Series career off strong, winning the 2006 Nextel Cup Series Rookie of the Year and also becoming the first rookie to qualify for the Chase for the Nextel Cup. Today, the three-time Daytona 500 winner (2016, 2019, 2020) has run nearly 600 NASCAR Cup Series races over the course of his career, seeing victory lane 44 times and garnering 259 top-10 finishes.

Currently, Hamlin races full-time in the NASCAR Cup Series behind the wheel of the No. 11 Toyota Camry for JGR, where his teammates are Kyle Busch, Christopher Bell, and Martin Truex Jr.

So, just how rich is Denny Hamlin? He’s got an estimated net worth of $65 million. Sponsored by FedEx, Hamlin made a total of $14.6 million in 2020 alone, with $13.1 million coming from salary and winnings and the remaining $1.5 million coming from endorsements and licensing. In 2019, he raked in $14.2 million, according to Forbes. He’s also dabbled in the NASCAR team ownership game, as the minority owner of NBA legend Michael Jordan’s 23XI Racing, which fields the No. 23 car driven by Bubba Wallace.

Denny lives in a 30,000 square-foot mansion in Lake Norman, North Carolina with his girlfriend, Jordan Fish, and his two kids, Taylor James Hamlin and Molly Gold Hamlin. This place has a bowling alley, a basketball court, 24 TVs, and a race car in a glass-walled garage. Yeah, we’d say Denny is doing pretty good for himself.

WATCH: That Time Danica Patrick Made NASCAR History at the Daytona 500