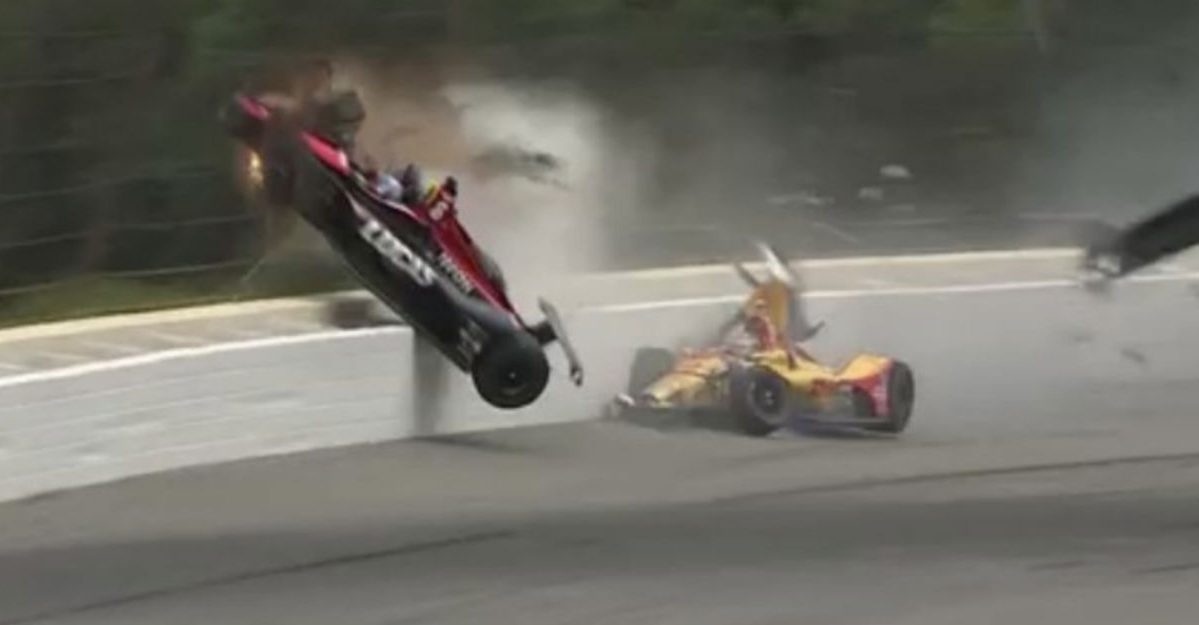 Ryan Hunter-Reay recalls seeing Robert Wickens’ car hit the fence at Pocono Raceway, slingshot back toward his exposed head and that he was somehow able to “shrug down” inside his cockpit to avoid the debris.

Video footage from his in-car camera doesn’t show Hunter-Reay moving at all.

Instead, the clip provides a terrifying glimpse at just how close Wickens’ spinning car came to striking Hunter-Reay’s head in what would have almost surely been a fatal blow.

Wickens suffered spinal cord and other injuries in Sunday’s crash. Hunter-Reay, an IndyCar champion and Indianapolis 500 winner, was not injured.

“I could see it. I knew it was close. I saw him get up into the fence and he was flying over me, I saw all of it,” Hunter-Reay said Thursday in an interview with The Associated Press. “In real time, having lifted, I wasn’t really aware I was that close. After seeing the in-car, you know, the reality set in that I got very close to a much different and much worse outcome.”

Hunter-Reay and the entire IndyCar paddock go back to work this weekend still pained by the Pocono crash. Wickens has been hospitalized with a spinal cord injury and the severity has not been determined. The waiting has been agonizing for the close-knit IndyCar community as drivers prepare for Saturday night’s race at Gateway Motorsports Park near St. Louis.

“It’s a quick turnaround, for sure,” Hunter-Reay said. “It’s been a tough week.”

Hunter-Reay was on his way to St. Louis after a few days at home with his wife, Beccy, and three young sons, who watched the race on television in Florida. One of the boys asked him why he always goes racing and to please not crash. Another could not explain where he found a pendant of a guardian angel that he handed to his mother after the crash.

Not wanting to draw attention from Wickens and his recovery, Hunter-Reay was reluctant to dwell on his brush with danger. But he had two very strong takeaways.

“What effect did it have on me? Well, I’d like to see the cockpits protected in the future,” Hunter-Reay said. “And the other effect was, ‘Wow, I just got away with one.'”

IndyCar has been studying different ways to protect the open cockpits for the last several years. The series has tested a prototype of a windscreen that could deflect debris, while others have made cases for an aircraft-type canopy that encloses the cockpit or a halo protector similar to the one Formula One introduced this year.

Justin Wilson died in 2015 when a piece of debris struck the top of his helmet at Pocono. In 2011, Dan Wheldon died of a head injury at Las Vegas when his car flipped cockpit-first into the fence and his head struck a pole.

Wickens’ car turned several times along the fence and hit a pole but the cockpit didn’t flip into the steel.

The Pocono crash did not give Hunter-Reay a clear idea on which protection IndyCar should adopt.

“The windscreen would have its benefits in certain accidents, but what happened the other day, the halo design would have been better because it is a more robust system that would keep the weight of the car off a driver,” Hunter-Reay said. “The windscreen is meant to deflect debris. The halo is a structural support. There are two different approaches and I am a fan of any type of cockpit protection moving forward.”

Praying for @robertwickens. Since the moment my car came to a stop after that horrific crash all I can think about is Robbie’s well being. Thinking about Karli and their whole family. He’s as tough as they come, I know he’ll be focused on getting back on track 🙏🏼

I want to express the utmost appreciation for our IndyCar AMR Safety Team, the entire IndyCar medical staff as well as Dr. Trammell. You all are heroes. Absolute best in the business. Can’t thank you enough.

Hunter-Reay also wonders if fencing at race tracks needs to be changed. IndyCar drivers have been asking for a structural change that would move the poles outside the fencing since Wheldon’s death. Wickens’ car, which was shredded by the fence, tore a gaping hole in the fence that needed two hours to repair.