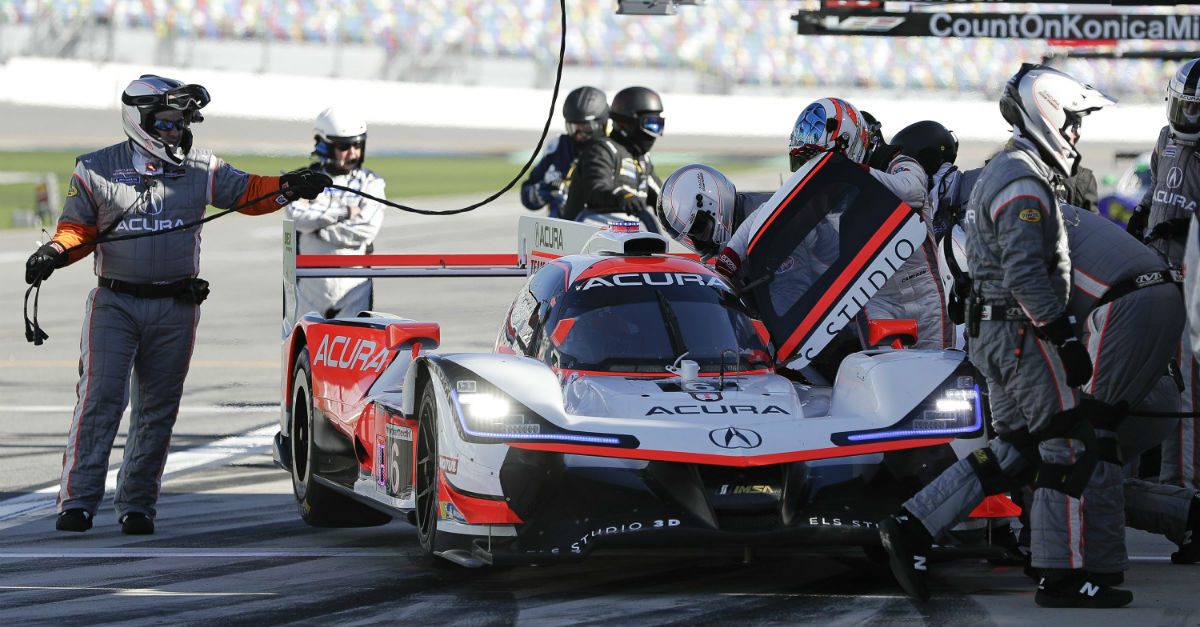 DAYTONA BEACH, Fla. (AP) ? The Corvette Corral is just inside the fourth turn and the Ferris wheel lifts fans 150 feet above Daytona International Speedway. The party in the infield at the Rolex 24 at Daytona includes a wine-and-cheese event, a parade of historically significant cars and collectors from all over the world.

Those roaring engines? One of the most prestigious sports car races in the world is the background noise for one of the most unique events in motorsports.

The unofficial opening event of major league motorsports begins Saturday with a stacked field that includes Alex Zanardi in his first North American race since he lost both his legs in a 2001 crash . It is Fernando Alonso?s first race since he closed his Formula One career in November and the final race for Christian Fittipaldi before he retires from competition.

Katherine Legge is headlining an all-female lineup full of so much talent that calling the team a gimmick would be an insult to its drivers. Townsend Bell is part of a new team fronted by IndyCar team owners Jimmy Vasser and James Sullivan, and he will be juggling his jobs as driver and NBC Sports analyst.

NBC Sports is in the first year as IMSA?s television partner and pulled out all the stops for its inaugural sports car event. IMSA is celebrating its 50th anniversary this season and NBC is treating the Rolex as a massive birthday celebration. The network brought its IndyCar and NASCAR talent lineups to Daytona and will use Bell and AJ Allmendinger in its coverage as the two also carry heavy driving loads in the twice-round-the-clock event.

?Looking at the Saturday and Sunday schedules, they didn?t write down anywhere where I am sleeping,? Allmendinger said Friday.

Sleep is secondary at the Rolex. This year?s event has more reason than ever to pay attention.

Action Express Racing is the defending overall winner and this race was supposed to be a farewell for Fittipaldi, who would have likely done a few stints behind the wheel as part of a four-driver lineup trying to make it back-to-back titles in the Cadillac DPi. But travel delays had driver Mike Conway idling in England during Friday?s final practice and the team had to move forward without him with Fittipaldi carrying a heavier load than planned, alongside Joao Barbosa and Filipe Albuquerque.

The DPi class is loaded and Mazda Team Joest broke a 26-year-old track record in winning the overall pole. Roger Penske?s pair of Acuras qualified second and third, while Wayne Taylor Racing, the winning team in 2017, qualified sixth with Alonso watching from the pit stand. Alonso and Kamui Kobayashi, a Toyota factory driver, were added to the Taylor lineup, making it this year?s ?star car? and one of the favorites.

Alonso has been crisscrossing the world this month, the start of his first year of retirement. He noted he is a little overwhelmed at how quickly his schedule is filling up. Alonso will run the Indianapolis 500 in May and doesn?t see things easing up before June.

?I am feeling like I need to go back to F1 to get some time off,? the Spaniard joked.

Zanardi will compete without his prosthetic legs and use a BMW-designed steering wheel with hand levers Although he?s raced in touring cars since both legs were severed above the knee in crash in Germany, Zanardi has become a world-renowned hand cyclist and plans to focus on qualifying for the 2020 Paralympics in Tokyo once this weekend?s race is over. He is already a four-time gold medalist spanning the last two games.

?I plan to go but I have to qualify and it is like buying a lottery ticket when you say you are planning to buy a house in Hawaii because you are going to win $10 million,? Zanardi said. ?Yes, I am planning to go to Tokyo, but I will be 53 this year and some of my opponents are half of my age and it won?t be easy, but it will be a lot of fun trying to qualify for that.?

He is competing in the GT Le Mans class, which includes the two Ford GTs from Chip Ganassi Racing that won the last two years. The lineups this year are 2017 winners Joey Hand, Dirk Mueller and Sebastien Bourdais, and last year?s winning team of Ryan Briscoe, Richard Westbrook and Scott Dixon.

A balance of performance rule led to changes that has the Ganassi camp unsure of a third consecutive class victory.

?Not that we can?t win it, but we?ll need the sun, the moon, the stars, the earth and the planets to all line up,? Ganassi said.